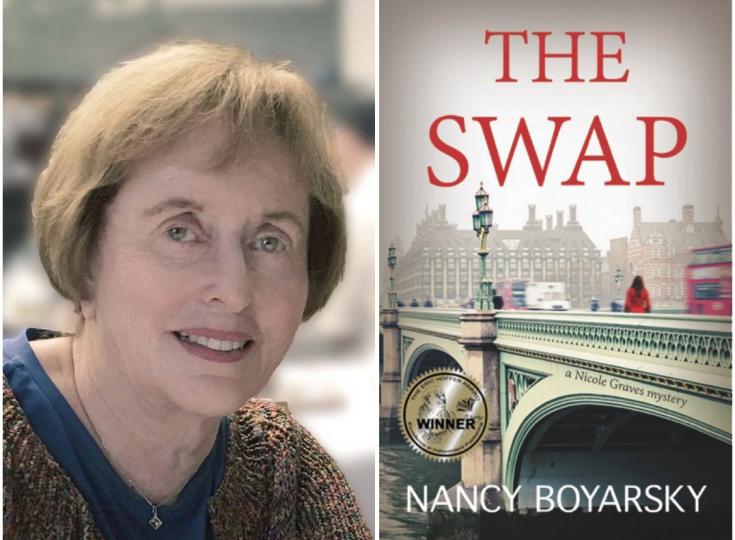 Nancy Boyarsky is the author of the Nicole Graves Mysteries, the fourth of which—the Ransom—will be released September 24th. She is currently writing book 5, which takes place in London after three adventures in Nicole's home town of Los Angeles. She has also written articles on a variety of subjects for the Los Angeles Times, West magazine, Forbes, McCalls, Playgirl, Westways and other publications. She lives in L.A. with her husband, the journalist Bill Boyarsky. As our Author of the Day, Boyarsky tells us all about the first book in the Nicole Graves Mysteries, The Swap.

Please give us a short introduction to what The Swap is about..

Here’s a short description of the plot:

When Nicole Graves arranges a summer-long swap of her Los Angeles condo for a London couple’s house, she thinks it’s the perfect arrangement. She’s always dreamed of seeing the real London; she’s also hopeful the time away with her husband Brad will be good for their troubled marriage. But things don’t turn out the way Nicole expects: The Londoners fail to arrive in L.A. and appear to be missing. Then people begin following Nicole and making threats, demanding information she doesn’t have. Soon, Nicole realizes she’s in serious trouble––but she can’t get Brad or the police to believe her. When the confrontations turn deadly, Nicole must either solve the case or become the next victim.

What inspired you to write about a Los Angeles-London house swap?

Years ago, my husband and I swapped houses with a London couple. I worried myself about the possibility that the other couple would steal our valuables, wreck the house and crash our car (which was part of the exchange). But nothing bad happened. We had a month living in an area of London called Chiswick, and it was lovely. The houseThe house was nicely furnished with the same conveniences (dishwasher, etc.) we had at home. Even so, it was kind of creepy., and I put that in the book.

After we returned, and I became interested in mystery writing, I started thinking about what might have happened if the Londoners had never showed up at our house and had disappeared altogether. I built my plot around that situation. I used the setting for our own London experience, combined iwith another trip we took up the West Coast of Scotland to the Isle of Sky. I had a lot of fun writing this book.

Tell us more about Nicole Graves. What makes her tick?

It’s a trend these days for mysteries to have damaged protagonists. This is not Nicole. She doesn’t have skeletons in the closet. (At least not in book 1 of the series, although some pretty serious misadventures do crop up in The Swap and later installments.) She smart and likable, as well as pretty and sweet-looking with a beguiling, dimpled smile. People find it easy to confide in her, which is a plus when she becomes serious about working as a private detective . She has great coping skills. Her one weakness is her insatiable curiosity about people which is a major driving force.

Readers have compared your work to that of Hitchcock. Are you a fan?

I love the Hitchcockian plot involving an innocent abroad who picks up the wrong suitcase and is pursued by criminals intent on getting it back. That is basically the plot of The Swap, although it involves a house instead of a suitcase.

The book contains a lot of twists and turns. Did you plan it all out before you started writing, or did some of it happen along the way?

I don’t really plan my books out ahead. I know who the victim, murderer, and heroine are from the start. As I go along, I add witnesses and suspects. Most of the twists I added in my first or second rewrite. Several years went by before I finally found my publisher, Light Messages. When I reread the book to update it, I was surprised by the twist at the end where the character Nicole trusts the most turns out to have been lying about everything. I’d completely forgotten I did that.

I’m an artist. This is a hobby, but I spend a fair amount of time working in oil paint. I base them on old family photos going back to my girlhood, my mother’s youth, and even earlier. It’s a nice change from writing. It feels like more of a zen experience. [Note: I’ve included a couple of paintings if you want to use them.] I’m also an editor. My husband was with the Los Angeles Times for many years and wrote a featured column called The Spin. He always sent his columns to me so i could edit them before he submitted them to the Times’ editors. Now that he freelances and is writing a book, I’m still his editor.

The Swap is the first of the Nicole Graves Mysteries. They are all stand alones. You can start with any one of them. I might have a brief reference to something that happened in a earlier book, but I explain it and put it into context so that it doesn’t confuse my readers.

I would advise my younger self to get started writing fiction back then. There were more publishing houses, and even the big ones were willing to take a chance on a new author. It was a much better time for writers of all kinds.

I don’t feel compelled to write. I enjoy it, which is altogether different. I find that plotting a book is intellectually stimulating and a lot of fun. For me, the best part is rewriting. There is a saying at the Santa Barbara Writers Conference: There is no such thing as good writing—only good rewriting. So true!

When I’m deeply involved in a current project, it’s impossible for me to think of the next book I might do. I can only do one plot at a time.

I think I can build characters fairly well. Dialogue can sometimes be a challenge, especially when my characters are not American or are teenagers who tend to use slang. The Swap, as well as book 5 (as yet untitled) which I’m working on now, both take place in London. It’s hard for me to write convincing Britspeak. Watching British mysteries on TV does help to some extent.

When I have a book signing, someone usually asks about my writing process. To me this is the least interesting thing about writing, but here goes. I try to get my exercise, household chores, shopping and errands out of the way in the morning. If I can do all that before 10:00 a.m., I’m really happy because then I have two hours to write before lunch, but that rarely happens. Usually I start writing at 1:30 and work until 5:00. If I’m on a roll, I can write 1,000 words in an afternoon (that’s 4 double-spaced pages), sometimes more. But there are days when I have to go back and refine plot points and smooth out my writing. As I mentioned, I make the book up as I go along. Sometimes I’ll paint myself into a corner and have to backtrack. On the first draft, it’s two steps forward, one backward. Perhaps I could avoid the snafus if I did a detailed outline before I start writing. Somehow, that isn’t in me.

I’m about halfway through book 5 of the series. After three mysteries that take place in L.A., Nicole is sent to England to pick up a 17-year-old girl who’d in a special exchange program at King’s College London. Her parents are insisting she return home in the middle of the year after they learn she hasn’t been attending classes, nor has she been sleeping at her dorm most nights. The girl agrees to fly home, but before that can happen, she’s arrested for the murder of her boyfriend. She says she’s been framed, and Nicole seems to be the only one who believes her.

Where can our readers discover more of your work or interact with you?.

My website is nancyboyarsky.com for more information about me and my books. Readers can communicate with me through my website or through my author page on Goodreads.com

My books are available at bookstores, libraries, and the following websites: 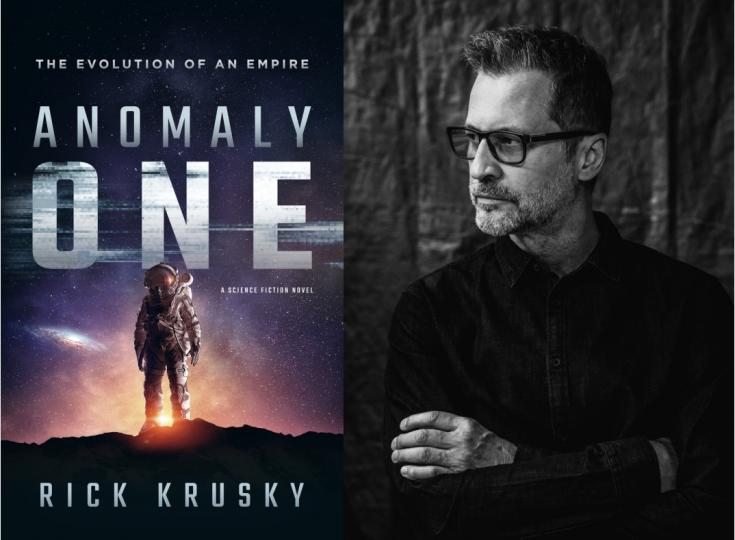 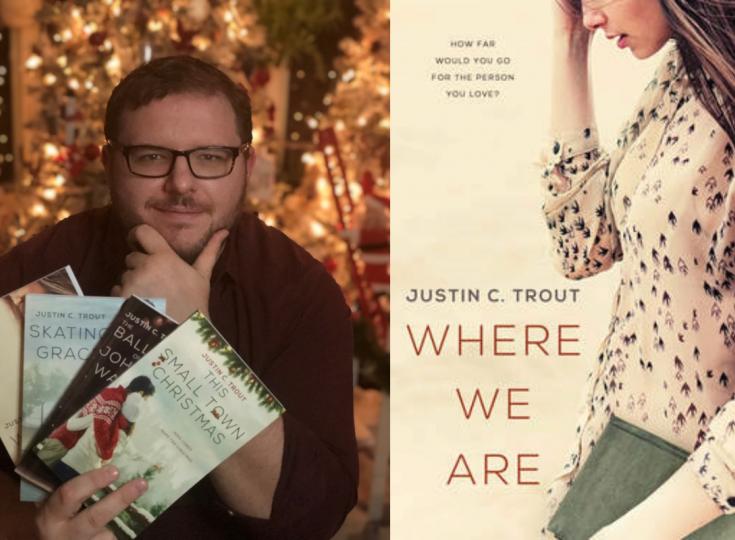 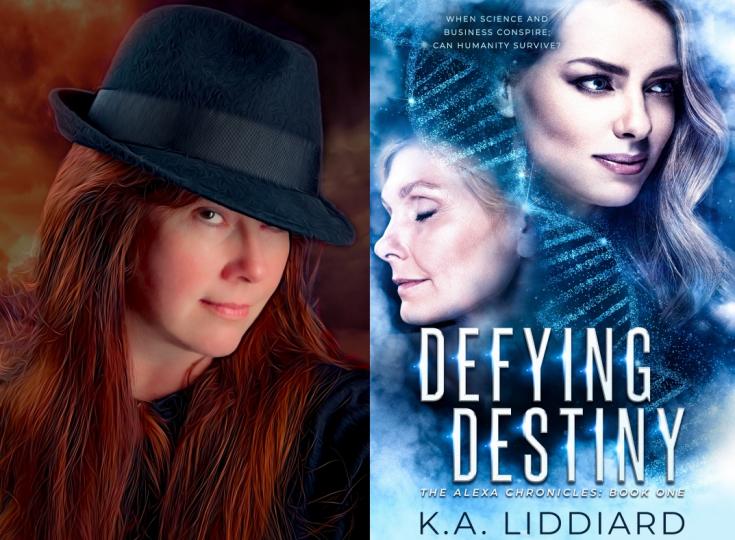 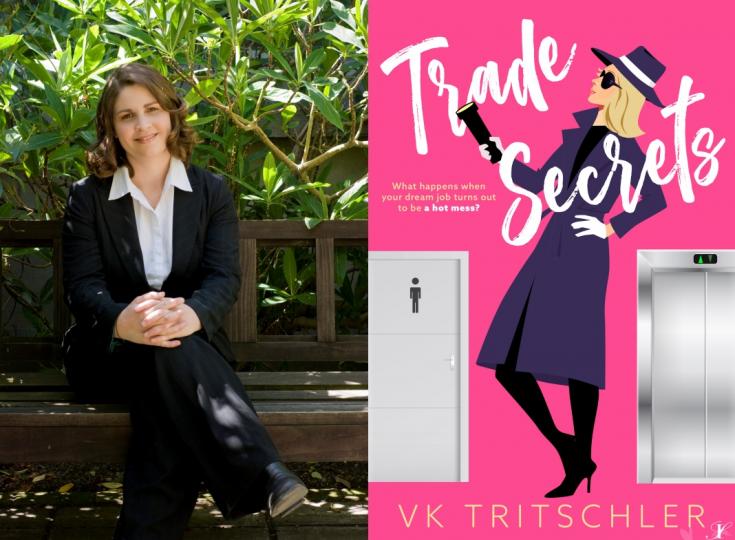 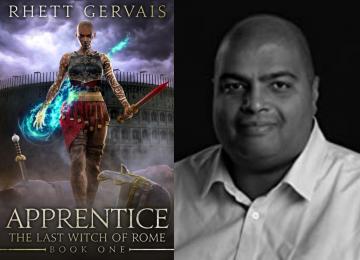 Rhett Gervais - A Well Constructed Fantasy World Set in Ancient Rome
FEATURED AUTHOR - Rhett's love for all things science fiction and fantasy grew out of a Sunday morning family tradition of watching Star Trek re-runs on the CBC. His love of storytelling is the result of to many hours playing D&D as a dungeon master, doing his best to murder his players! He lives in Pincourt Canada with his wife, daughter, and a crazy calico named Maggie. As our Author of the Day, he tells us all about his book, Apprentice: The Last Witch of Rome.