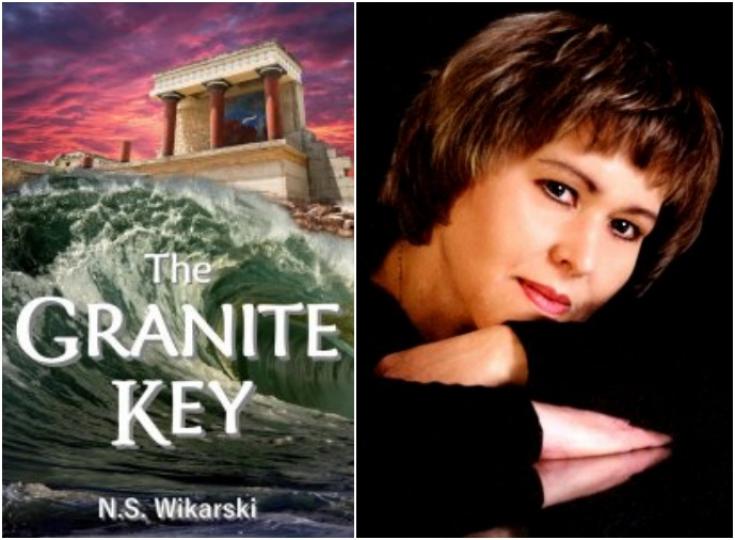 Nancy Wikarski is a fugitive from academia. After earning her Ph.D. from the University of Chicago, she became a computer consultant and then turned to historical mystery and adventure fiction writing. She is a member of Mystery Writers of America, the Society of Midland Authors, and has served as vice president of Sisters in Crime - Twin Cities and on the programming board of the Chicago chapter.  As our author, they tell us all about their book The Granite Key.

Please give us a short introduction to what The Granite Key is about.

The Granite Key is the first book in a seven-book archaeology thriller series. The Arkana Series, as a whole, is a global treasure hunt. The concept is simple. Take one lost artifact and scatter clues to its whereabouts across the entire planet. Add a secret society and a fanatical religious cult vying to claim it. The Arkana wants to preserve it for posterity. The Nephilim want to exploit it to create a terrifying new world order. Only one faction can win. More importantly, only one can survive.

Was there anything in particular that made you want to write this book?

My interest in writing the Arkana Series began with a nagging question that I couldn’t answer. It has always puzzled me that societies overvalue men and undervalue women. Why is 52% of the world’s population treated as a minority? I started to wonder if male dominance is actually our biological destiny or if we might once have behaved differently. In my personal quest for answers, I stumbled across archaeological evidence proving that human civilization was not originally male-dominated or violent. This was true of every race on every continent.

That revelation intrigued me. I couldn’t help but wonder what happened to change us and why. At this point in our cultural development, I think we need to find a less exploitative model for our behavior. The distant past shows us that model. My series is a fictional attempt to introduce matristic civilizations to a mainstream audience. It tries to answer the question of how we got to be this way and why it might be a good idea to retrace our steps.

Why did you decide to include Minoan artifacts, a secret society, and a fanatical religious cult in the story?

The Cretan Empire was unlike the civilizations that came after it in that it was matristic. Matristic cultures were not patriarchal. Women held positions of authority in government and religion. Using this culture as the basis for my treasure hunt dovetailed neatly with my exploration of alternative social structures that didn’t promote male dominance. As for the secret society and the religious cult, every adventure yarn needs great heroes and despicable villains

Tell us more about Cassie Forsythe. What makes her tick?

At the beginning of the series, Cassie is struggling to fit in. She’s been moved around the country by her sister with no explanation, so she feels lost much of the time. Her involvement with the Arkana gives her a new sense of family and a cause to believe in. Her psychic abilities come as a complete surprise, but she learns to use them to help the Arkana complete its most critical mission.

Why did you use a vision as a way to warn Cassie about what was in store for her?

I did that because I believe good writing should show rather than tell. As Cassie immerses herself in visions of the past, she feels as if the experience is happening in real-time. This gives the reader the same sense of immersion.

Much like the main character in the series, I am an empath. That means I can sense other people’s feelings as if they were my own. This is a handy skill for an author because I can slip easily into the heads of my characters and see the world through their eyes. I think it gives my books a sense of immediacy, so my readers can experience the adventure first-hand.

It can be read as a standalone though I suspect it’s more enjoyable to experience the characters’ growth if the story is read as a trailhead for the entire series. Every book in the series involves a standalone treasure hunt on a different continent for a different lost artifact. To provide context and backstory, there’s a list of character names in each subsequent volume for readers new to the series who choose to jump into the middle of the action.

Where does your fascination with archeology come from?

Someone once said that the past is another country. That makes it immediately exotic, even if an archaeological dig is going on right in your own back yard. Archaeology also poses a readymade mystery, which makes it instantly appealing to a mystery writer like me. A dig is like a crime scene that a forensic detective needs to analyze to understand what happened and why.

Readers say that you describe the scenes in great detail - how did you pull this off?

Because my empathic imagination allows me to leap inside the heads of all my characters, I can sense what they are all experiencing wherever they happen to be. Then, all I have to do is transfer that vision to the printed page.

Which famous person, living or dead, would you like to meet and why?

I’m fascinated by Elizabeth I. She ruled alone for almost half a century at a time when women weren’t thought capable of such a difficult role. Her reign ushered in a golden age of stability and security for Britain and taught the world what women can do.

I found my villain to be the hardest. Abraham Metcalf, the patriarch of the religious cult, represents everything I detest. Because I couldn’t relate to his values at all, there was a real danger of writing him as a caricature instead of a human being. I had to delve into his personal psychology so that, even if I didn’t like what he was doing, I could understand what motivated him to commit such appalling crimes.

Do you have any interesting writing habits? What is an average writing day like for you? Favorite writing spot, the best time of the day to write, sources of inspiration?

I have no interesting habits—simply dogged perseverance in getting words onto the page. The only time of day when I absolutely can’t write is in the evening because I’m a day person by nature. As for sources of inspiration, I’m happy immersed anywhere in nature. More specifically, the sea or lakeshore are my happiest places to write.

Two things. I’m currently working with narrators to produce audio editions of the Akana Series. Half the books will be on Audible after the first of the year, and the rest by early March. My current writing project is a crossover mystery between my two series that should be published before the end of 2020. In it, a previous generation of Arkana agents crosses paths with my Victorian Chicago amateur sleuths when they all become entangled in the recovery of a mysterious artifact stolen from the Chicago Natural History Museum in 1895.

My books are easy to find through my Amazon Author Page. Readers can email me via my website. My public Facebook page is the best place to find recent updates or post a comment.