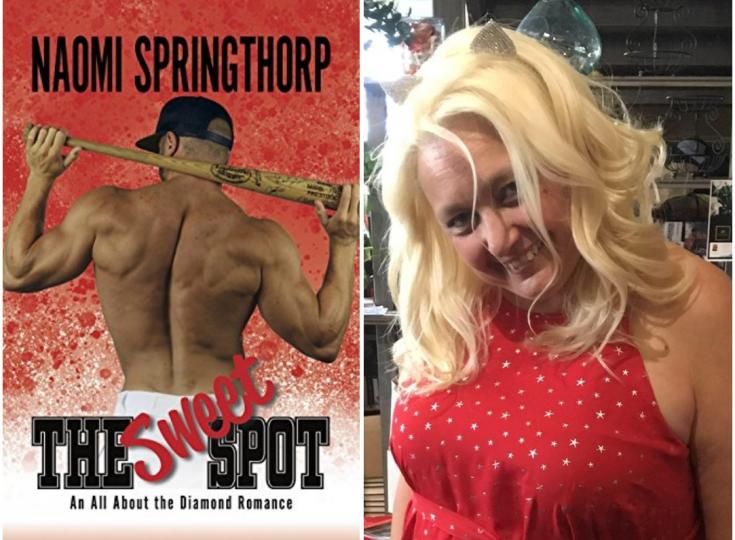 Naomi Springthorp is a baseball fanatic and loves music. She says everything in her life has a soundtrack, which is apparent in her books. Apart from her baseball romance series, All About the Diamond, she has also published her Betting On Love Las Vegas series and a couple of standalone books. As our Author of the Day, Springthorp tells us all about the first book in the All About The Diamond Romance series, The Sweet Spot.

Please give us a short introduction to what The Sweet Spot is about.

The Sweet Spot is what happens when a loyal baseball fan finds herself out on a date with her fantasy baseball boyfriend. Is it a dream? Can it be her reality? Will she strike out at love?

What inspired you to write about someone whose baseball fantasy became reality?

I have severe baseball issues. The baseball you read in my books is all me. I put a lot of myself into the baseball fan side of the heroine, Sherry. And, I admit, I had a major crush on my teams catcher. I collect autographs and I was never able to get his.

Tell us more about Rick Seno. What makes him so special?

Seno is fit, but thick and rock solid. He’s been a catcher for so long that he’s developed strong glutes and an amazing view from the rear. He’s a warrior on the field and when he sets his mind on something he will make it happen. But, he’s also broken and doesn’t trust women. He’s been dumped and lied to in the worst ways. It’s the combination. He’s a vulnerable warrior with a big heart that doesn’t know how to do anything other than steamy in the bedroom and loses his shit in elevators.

Why did you pick San Diego as the backdrop for your story?

I love San Diego. I moved to San Diego after I wrote the first three books in my baseball series. I’m a huge San Diego Padres fan.

Secret? I’m a pretty open book. I’m the loudest fan at the stadium, you can hear me on tv. I love music. I play piano and sing, but mostly just for myself—though I do like to sing to whatever they are playing as I’m walking through the store. Oh! My newest skill is Model Hunter for my author/photographer partner in crime Tonya Clark.

This is the first book in a series. Can it be read as a standalone?

How do the other books in this series tie in with this one?

The series is like a small town romance series, except each player on the team gets his love story instead of the town people. More characters are added with each story and books four and on are standalone, though I like them better read in order as a series and feel you will get more out of them that way.

Why baseball? What drew you to the sport?

I’ve loved baseball since I was a kid. For me, baseball came before writing. You can never do better than writing what you know. I know baseball and music. I love the statistics and strategies involved in baseball. Many think its slow and boring, not action—Not me. I know my players and how they will react in different situations. I can predict what the coach will do next or what the outcome of the coaches choice will be.

What, would you say, makes sport romances so much fun to read?

Sports romance is my favorite genre. I think it’s the hot alpha characters that athletes can be and the reputation they have. Who doesn’t want to find out what makes them tick?

Absolutely. I loosely outline my stories before I start writing and sometimes they simply refuse to do what they are supposed to. It’s okay. Their way is usually better.

Readers say they found this book hard to put down... how did you pull this off?

I have no idea. I wrote the story I wanted to read.

July 2016. I’m a workaholic, and I was much worse before I started writing. I hadn’t been away from the office for more than five days in almost twenty years. I took off on my own and went to the All-Star Game week full of festivities, totally immersed myself in baseball, turned off my phone, and refused to check my email. I stayed away for two weeks and the last day I was gone I woke up in the middle of the story, all consumed by the dream I was disturbed from. I wrote ten thousand words before I sat my tablet aside and did my best to ignore it. A week later I shared with a couple people and was told to finish the story. I wrote the complete novel in about a month and I haven’t stopped since.

I’m not sure I have an average writing day. I love it when I’m able to write for long stretches of time without life getting in the way. When I can, I will write from the moment I wake up until the sun comes up and snack off and on the whole time. Those are the days I long for and they produce a lot of words. Habits? I tend to change writing location every few hours. I require Dr. Pepper, water, popcorn, and peanut M&M’s within my reach even if I’m not partaking. I make a playlist for each story and add to it as I write. Some songs are for me and to keep me in the mindset of the characters, while others are actually integrated into the story.

I’m currently polishing an epic standalone novel, “Confessions of an Online Junkie.” I’m continuously brainstorming new story ideas that I outline and create characters for, there are at least a dozen of them waiting for me to get to them. “Up to Bat,” An All About the Diamond Romance Book 6 is my current work in progress, which will be closely followed by the next book in my baseball series “Stalking Second.” But, I do have two new story ideas that I’m anxious to write, one of which has a prequel out in an anthology. Keep an eye out for “The Panty Thief.”

I’m addicted to Facebook and I’m loving BookBub more everyday. You can find all of my links at linktr.ee/naomispringthorp. My reader group, Naomi’s Naughties is www.facebook.com/groups/naomisreaders.