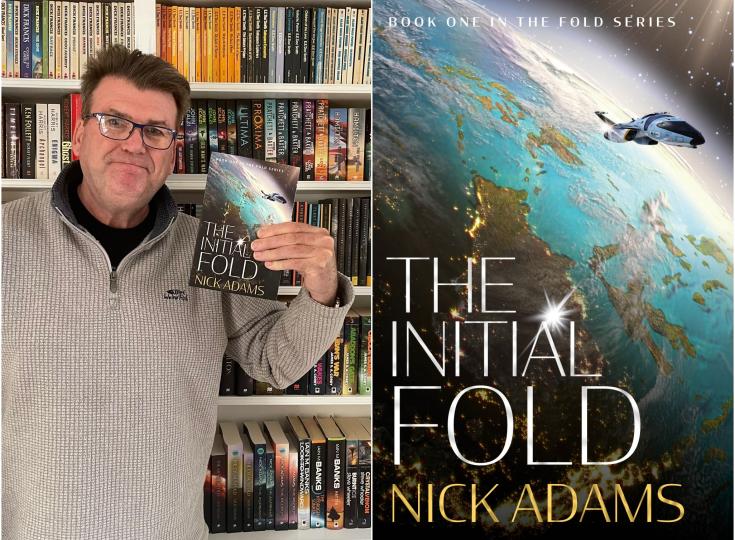 Nick Adams grew up in a small village near Maidstone in Kent, England and right from an early age was a fervent NASA, space and Apollo fan. After watching the first moon landing in 1969 and the subsequent moon missions that followed, he discovered science fiction books and cut his teeth reading Asimov, E. E. Doc Smith and Alan Dean Foster. In more recent times, Andy Weir and Peter F Hamilton to name but two, have joined them on the bookshelves. After serving in the British Army for several years, Nick became a publican, managing and later owning his own village pubs for a number of years before moving to Brisbane in Australia where he began writing his own space opera, and the Fold series was born. In late 2018 he returned to the UK, where the next adventures in the series evolved, along with the ‘Bache Loftt’ spin-off series. Nick writes the kind of stories he would like to read. The Fold Series is set a little in the future and based around upcoming NASA technology. The series features normal everyday people put into extraordinary circumstances, with realistic reactions, humor and language. After all, nobody would say ‘oops’ if a 14km-long alien starship de-cloaked next to them. Head over to his website to sign up to the Reader Group, and Nick will personally keep you up to date with his bi-monthly newsletters about what novels he’s currently reading, cover reveals, book launch dates, and general progress on his current project.

Please give us a short introduction to what The Initial Fold is about.

NASA-sponsored physics professor invents a workable FTL (faster than light) drive. He insists on being part of the test crew on the first flight. Needless to say, quite a lot happens.

What inspired you to write this book? Was there anything in particular that made you want to tell this story?

Fifty years ago, I read The Skylark of Space by E E Doc Smith. It was my first sci-fi book and I loved it. It’s been my favorite genre ever since. I re-read it a few years ago and thought, although it’s a little dated now (it was written around 1918) the story itself still held up and I began to think how the premise of the story could be brought up to date with modern technology. In 2017 The Initial Fold began to take shape.

Tell us more about Edward Virr. What makes him tick?

Edward Virr is my cousin's six-year-old son. I just thought the name was perfect for my main character and his age was good too as he’d be in his mid-thirties in 2049. I, of course, asked permission to use his name, his parents agreed and think it’s quite cool that their son will save the universe in thirty years from now.

As for personality, he’s definitely not me. I’m more Andrew Faux, or at least how I’d like to think I’d behave and react in such extraordinary circumstances. But who knows, I might run away and hide? 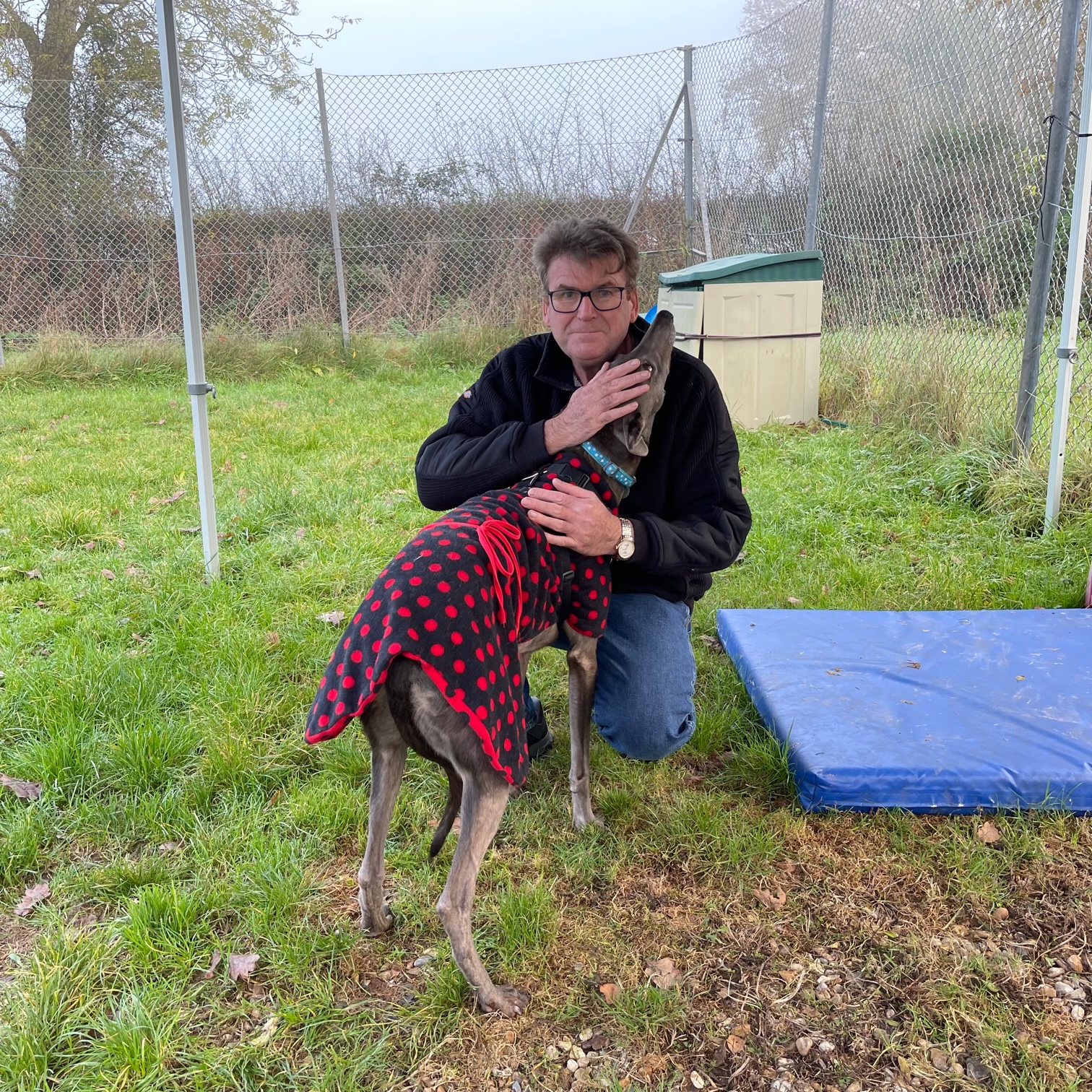 What did you have the most fun with when writing The Initial Fold?

The characters, especially the sentient ship's computers. Giving them a sense of humor was endless fun for me. You never quite know what they’re going to say or do next.

I search out all the artwork for my covers online and hand them over to my fantastic cover designer, Jane Dixon-Smith. After seven covers, she knows exactly what I’m looking for and within a couple of days will have the perfect configuration. She’ll be working on my eighth book very soon, I just have to source the images first.

This is book 1 from The Fold series. Can it be read as a standalone? How do the other books in the series tie in with this one?

It can be read as a standalone. Although my read-through rate is extraordinarily high. The vast majority that read book 1, want to know what happens next in the Fold universe and as there are now five books and counting in the series, I don’t need to tell you that the adventures get bigger, more terrifying, and even more addictive. 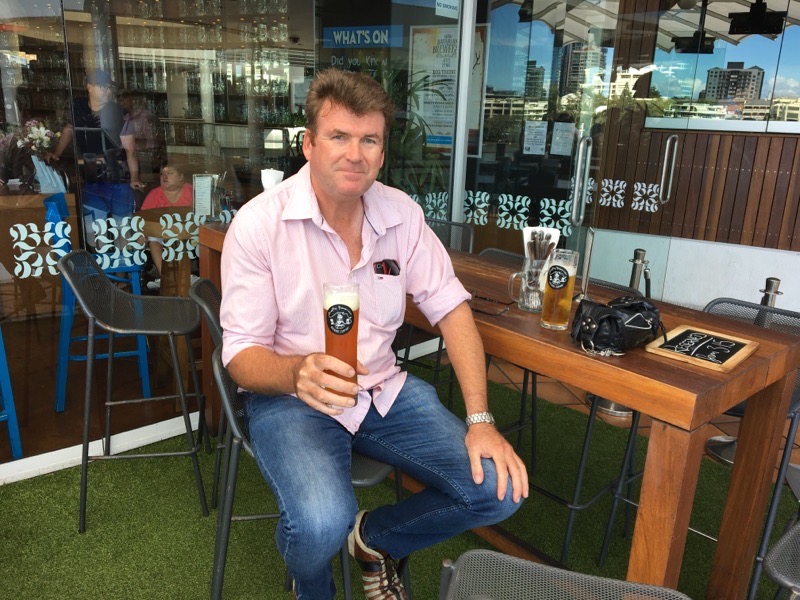 Readers have compared your books to the Hitchhiker's Guide series. Are you a fan?

Yes, I am. I remember reading Hitchhiker’s when it was released in 1979 and loved it. It was a breath of fresh air to have a sci-fi book with so much humor in it. This wasn’t the reason for the humor in my books though, that has more to do with being a retired publican and the fact that I tend to take the micky out of everything and everyone. That trait comes out in my books, especially from Andrew Faux.

Every day that happens. A character will suddenly say something or do something unexpected and the plot goes off in a weird direction. There’s not much I can do about it and just have to tag along taking notes.

Do you plan out everything that happens in the plot meticulously, or does a lot of it just "happen" along the way?

I’m what’s known in the industry as a pantser. No notes, no plotting, just an empty screen. I write by the seat of my pants. I’ve tried plotting a rough outline of a story with a series of bullet points, but as I mentioned above, a character will say or do something right out of the left field and the plot changes completely. I find it makes the story more unpredictable and the reader really has no idea what’s going to happen next. I certainly don’t while I’m writing it!!

I write in the mornings, normally from about 0730 to mid-afternoon when I’ll walk the dog and pop into my local for a pint or two. I like music playing in the background while I’m writing, mostly instrumental electronic stuff. Royksopp is my favorite at the moment. If you’ve read The Initial Fold you’ll know I’m a big seventies prog rock fan and I would normally play a lot of that but I’d just end up playing air guitar instead of writing. As you can see from the picture of my usual writing space, I’m quite a tidy person. I can’t work amongst the clutter. Sometimes I’ll wander off with my laptop and write in a café or pub, just for a change of scenery and atmosphere. 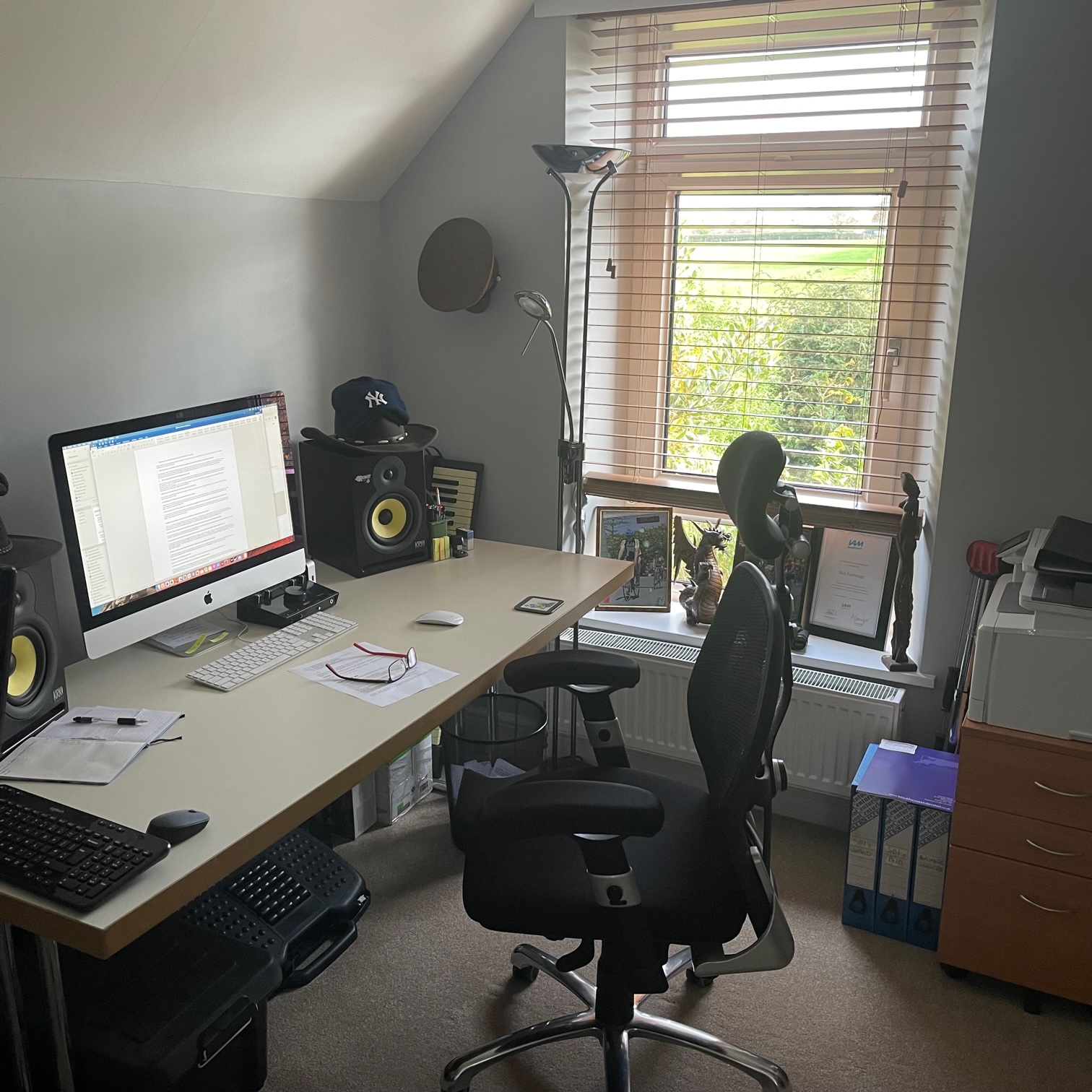 Book six in the Fold series, entitled “The Medusa Fold” That’s an exclusive for you as I hadn’t announced the title yet.

All of my books are available in both ebook, paperback, and large print paperback worldwide on all the usual suspects. My website at www.nickadamsbooks.com has all the information and links to most retailers. You can also join my reader list for bi-monthly newsletters and advance notice of release dates and a peek at new covers before anyone else.

There is also an email link to send me messages, which do come straight to me and I always answer everyone. 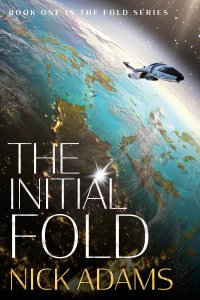 Nick Adams
What would you do if you materialised inside an alien starship? It’s 2049, and NASA-sponsored physicist Edward Virr is on the cusp of man’s greatest breakthrough – the ability to fold space and travel faster than light.
Science Fiction
$0.99
$3.99
Amazon
B&N
Kobo
Apple
Google