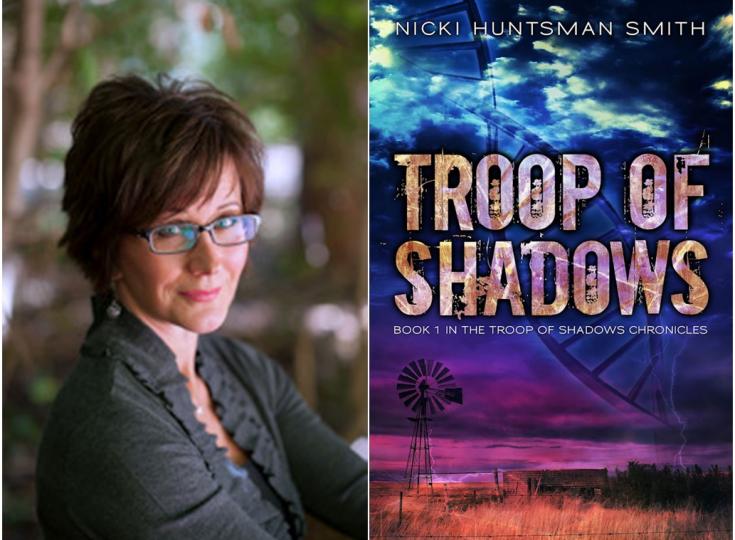 Nicki Huntsman Smith won the EPIC (Electronic Publishers Industry Coalition) for "Best Science Fiction eBook" in 2017 for her novel Troop of Shadows. As our Author of the Day, she tells us all about this book, the inspiration behind it and her characters.

Please give us a short introduction to what Troop of Shadows is about.

A mysterious pandemic (neither viral nor bacterial) sweeps the globe, killing most of the world’s population.  Those who do not succumb to the disease (coined ‘Chicxulub’ after the dinosaur-annihilating asteroid) are intellectually gifted, suffer from psychological or behavioral issues (ranging from mild Asperger’s to profoundly dangerous psychopathy), or both. The Troop of Shadows Chronicles tells the stories of the survivors through shifting points of view – their struggles to not merely stay alive, but to rebuild their decimated world while maintaining their humanity.

What inspired you to throw a doomsday prepper, molecular geneticist, journal-keeping loner and martial arts-trained nerd together in a post-apocalyptic world?

I’ve always loved apocalyptic and post-apocalyptic fiction.  I read No Blade of Grass and I am Legend/The Omega Man as a pre-teen.  The doomsday prepper provided an interesting narrative from the perspective of someone who was prepared for exactly the unlikely event that occurred in his lifetime.  I created the molecular geneticist character so she could explain the physiological process of how the disease began and why it was so devastating. The journal-keeping loner is the philosophizing, articulate son of Mexican immigrant laborers and offered a unique perspective and commentary as told through his first-person journaling. The martial arts trained nerd provided action, conflict, and humor in her interactions with secondary characters.

Your book has been compared to the work of R. McCammon and Stephen King. Who are your favorite authors of all time?

I have to admit, I have not read any Robert McCammon.  Stephen King is certainly one of my favorite authors, as well as J. K. Rowling, Anne Rice, Dean Koontz, Mike Carey, and Blake Crouch.  It’s difficult to pick a few favorites from a lifetime of reading books.

How did you go about creating the plot for Troop of Shadows? Did you plan the twists ahead of time or did they just "happen" along the way?

I don’t outline.  I began with a rather vague premise, then developed the characters so fully, that they helped write their own stories.  Most of the twists happened along the way.

Readers report that this is a book that made them think - about survival, the future and ethics. Was this intentional?

Yes, but I hoped to do so with a light touch.  Nobody wants to be preached to, but a story with underlying themes and lessons is more interesting than straight action.

I’m a weirdo who loves Renaissance festivals.  I attended my first one at the age of fourteen.  I’ve been designing and sewing historical clothing since 2004.  I sell on Etsy and also have a website: www.fairefinery.com

I often look to my own life’s experiences when writing my characters’ actions, dialogue, thoughts, etc.  There’s a little bit of me in all of them, even the creepy ones.

My favorite character in the series is Fergus.  In the first book, he’s a secondary character.  He’s absent in the second book, but has his own point of view in the third.  He’s irreverent, hilarious, and charming.  My least favorite characters aren’t the villains (writing them is so much fun), but rather the less fleshed-out ones whose presence is necessary for the storytelling.  I love all my primary and secondary characters no matter whether they’re good, evil, or somewhere in between.

That’s a great question.  The key to making them relatable is to make them flawed.  Nobody is perfect; everyone has shortcomings and experiences failure.  Nobody always knows what the right thing to do is all the time.  If my readers don’t care about the characters, they don’t care what happens to them.  A brilliant plot and elegant prose isn’t enough.  My goal is to coerce my readers into becoming emotionally invested in the characters, and that’s done by making them ‘un-perfect.’  I also like to inject a sense of humor into most of my characters, which is fun for me as the writer, and also fun for my readers.  I think humor is another hook for making them relatable.

Does your book contain a hidden message about humanity?

We’re all doomed!  (Just kidding…mostly.)  The overriding message is that we humans must take care of each other.  It’s really not any more complicated than that.

I can only write in my home office, which is untidy but inviting.  I write every morning for a couple of hours beginning around 7:00-8:00 am.  Sewing and other chores usually take up the rest of my day.

Your story jumps around a bit between different groups - why did you take this approach?

I wrote my first stand-alone book (Secrets Under the Mesa) in first person.  I told myself I would never do that again because of the limitations.  When I began writing Troop of Shadows, I wanted to tell the story from four unique perspectives.  I think that makes for a more interesting story, as well as giving the reader a break from some of the characters.

I’m writing my sixth book – another stand-alone.  It’s the story of the evolution of a soul as told through seven lifetimes on earth.  My working tagline is something like “a time-travel frolic with a profound spiritual twist.”