Nicole Evelina - The World of King Arthur Through Guinevere’s Eyes

Nicole Evelina - The World of King Arthur Through Guinevere’s Eyes
Posted on 10th of July, 2019 by Naomi Bolton 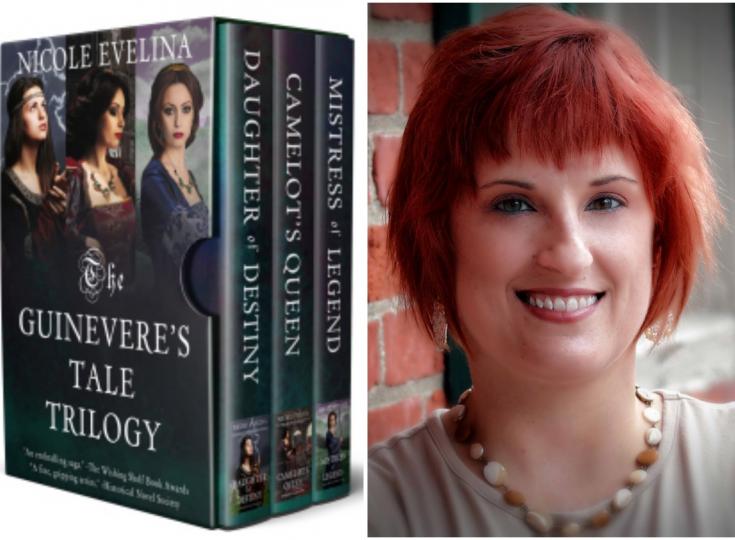 Nicole Evelina is a historical fiction, non-fiction, and women’s fiction author whose six books have won more than 40 awards, including three Book of the Year designations. Nicole was named Missouri’s Top Independent Author by Library Journal and Biblioboard as the winner of the Missouri Author Project in 2018. Her fiction tells the stories of strong women from history and today, with a focus on biographical historical fiction, while her non-fiction focuses on women’s history, especially sharing the stories of unknown or little-known figures. As our Author of the Day, Evelina tells us all about The Guinevere's Tale Trilogy.

Please give us a short introduction to what The Guinevere's Tale Trilogy is about.

It is basically Guinevere’s life story, the story of Camelot from her perspective. It’s a compendium of three books made into a single volume. The first book, Daughter of Destiny, covers Guinevere’s early life as a priestess of Avalon before she meets King Arthur. The second, Camelot’s Queen, is her time with him—the story you’ve heard before, but with some twists on motivation for her affair with Lancelot and other events you think you know. The final book, Mistress of Legend, takes you through the downfall of Camelot and Guinevere’s life after Arthur’s death. And let me tell you, she does NOT end her days in a convent in this version. She is a warrior woman with a lot of life left to live.

What inspired you to describe the world of King Arthur through Guinevere's eyes?

I’ve loved Guinevere since I was a little girl. Thanks to my dad, I grew up on the musical Camelot, so she was the role model for me that most girls find in Disney princesses. When I was in college, a friend of mine gave me a copy of The Mists of Avalon for Christmas. I LOVED it, but I hated Marion Zimmer Bradley’s portrayal of Guinevere as meek and well, stupid. That made me seek out other books about Guinevere and I read Parke Godwin’s Beloved Exile, which tells the story of what happened to Guinevere after the fall of Camelot. That made me wonder what happened to her before and after Arthur, which is something you don’t hear much about. Then Guinevere came into my head, telling me she wanted me to write her story, which I thought at the time would be all one book. I’ve known the ending all along.

What fascinates you about the legend of King Arthur?

I love how it keeps changing over time. There’s something for everyone to be found in the myriad of stories. Whether you’re looking for hope, fantasy, redemption, whatever, you’ll find it in the story of Arthur, one of his knights, or now – the stories of the women of Camelot. I actually wrote a book on how Guinevere changes over time with society’s views of women. It’s called The Once and Future Queen: Guinevere in Arthurian Legend. I think the Arthurian legend endures because it has its basis in universal and timeless truths: the quest for peace, honor and justice, it’s a rags to riches story, but also the ways in which jealousy, greed and betrayal can undermine even the noblest of intentions. Those are all parts of human nature that we will grapple with until the end of time.

I actually researched for 15 of the 19 years I spent on this trilogy, before and during the time I was actually writing. I took three trips to England, one of which was a two-week Arthurian legends tour, to be able to see the places people believe are associated with Arthur. I read hundreds of books (details on those can be found in the research tab for each book on my website), watched TV specials and even was fortunate enough to consult with Arthurian experts Sir Geoffrey Ashe and Jamie George, one of the people who guided Marion Zimmer Bradley when she was writing The Mists of Avalon.

I’m fascinated with the time period that people used to call the Dark Ages and is now called the Early Middle Ages, especially in England. For me, learning about how much more educated and cultured the people were than we tend to think was interesting. These are people who were under the influence of Rome for hundreds of years and who were in regular contact with people/cultures around the world due to trade, especially in the south and east. We don’t give them nearly enough credit.

Tell us more about Guinevere - what makes her tick?

Guinevere was raised by a strong woman with the knowledge that she was meant to rule. She had no idea she would be queen—she was expecting simply to take over from her father in Northgallis—but she always knew she had a purpose. When she began having visions and became a priestess of Avalon, she learned about the importance of doing the will of the gods, and so that became her guiding force. By the time she takes Camelot’s throne, albeit reluctantly, she sees herself as having a purpose forged by the gods—to protect her people from changes she sees as destructive to their way of life.

Now that doesn’t mean Guinevere is all good—no one is. As the only surviving child in her family, she was raised a bit spoiled. This means she wants her way in all things and is used to be number one at everything. When she encounters Morgan in Avalon and suddenly has to fight to impress the Lady of the Lake, she finds that it brings out her more negative qualities of jealously and competitiveness.

Why did you decide to tell her story over three books?

It was actually intended to be one gigantic book like The Guinevere’s Tale Trilogy is, but when Daughter of Destiny was nearly finished I started looking into agents and publishing, I came to find out no one would take a book that long from a first-time author. I noticed that the story neatly split itself into three parts, and those became the books of the trilogy.

Which book in the trilogy is your personal favorite and why?

You know they are each special to me in their own ways. Daughter of Destiny was my first novel, so it is my baby. Camelot’s Queen is very rich and plot-intense—it’s also where the most twists in the traditional story take place, so I love it. But Mistress of Legend is I think the strongest of the three books. I think you can see my growth as a writer and was really where I got to let my imagination have free reign because the end of Guinevere’s life is something so few authors have addressed. I felt like there was a lot of expectation from readers with the first two books: Daughter was strongly influenced by The Mists of Avalon, so I had to live up to the considerable reputation of that book. Camelot’s Queen is the story everyone is familiar with, so I had to strike a balance between what would be expected and putting my own signature on the story. With Mistress, none of that pressure was there. I had known how it was going to end since I started writing the series, so I could let myself have free reign to figure out how to get there. And I think the result is a highly unique, gripping book.

Believe it or not, Arthur! I’m the type of author who hears her characters in her head and he would not talk to me for anything. Finally I figured out he was the strong, silent type, who would only reveal as much as he wanted to reveal and on his own timetable.

You have won more than 40 awards with your books. Have you ever feared "second novel syndrome" - where you are afraid that the book you are working on won't be as well received as the previous?

Every. Single. Time. Winning so many awards is fantastic, but it puts a lot of pressure on me as an author to equal or surpass my previous work. At some point, I have to let that go and just write the book that wants to be written—write it as though no one else is ever going to read it and hope for the best. If I kept my previous accolades in mind all the time, I’d be paralyzed with fear.

“Dreams don’t work unless you do.” I fully believe that you have to work hard in order to help your dreams happen; you can’t just sit around and wait for them. That’s why that phrase used to be the lock screen on my phone. (Now it’s “Write like you’re running out of time” from Hamilton.)

Currently I’m researching a biography (my first) of Virginia and Francis Minor, a couple who was key to the suffrage movement in my home state of Missouri and home town of St. Louis. Next up is a series of WWII novels about real-life heroines you’ve likely never heard of. The first is a nun from Lyon, France, who worked with the Resistance and was eventually sent to Ravensbruck, where she volunteered to go to the gas chamber in place of a mother and daughter just days before the camp was liberated. The other three heroines are from Poland and will have their own separate books. Interestingly, both the one from France and one of the Polish women have a chance to become saints in the Catholic Church.