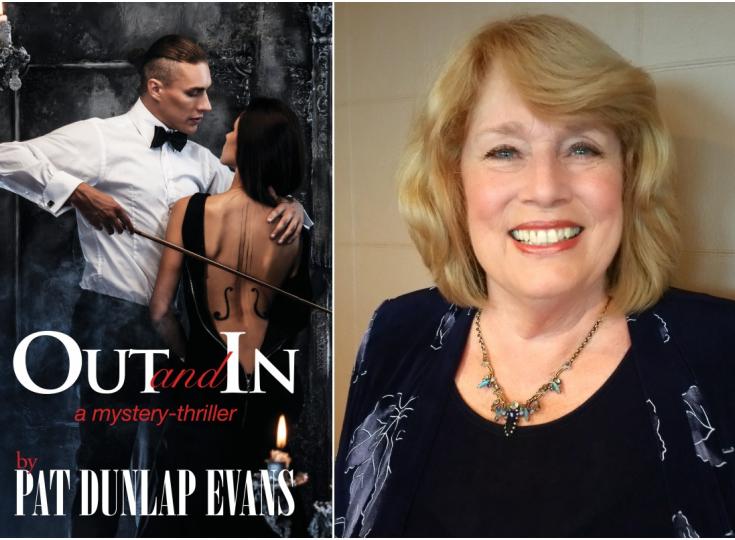 Pat Dunlap Evans was born in Michigan but "got to Texas as soon as I could." Her family lived in San Antonio and later Dallas, where she attended South Oak Cliff High School and Southern Methodist University. After marrying and having three children, Pat later completed bachelor's and master's degrees in English / Creative Writing at the University of Missouri branch in Kansas City, where her then-husband quarterbacked the Kansas City Chiefs. After a divorce, Pat stressed her way as a single mom through twenty-five years of advertising and marketing roles before quitting the day job to write fiction and screenplays. She lives in the Lake Travis area of Austin with her second husband Dr. Bill Evans and enjoys travel, golf, volunteer work, and the couple's five adult children, five grandchildren, and two Cockalier dogs. Pat has published two novels, To Leave a Memory, a family story of forgiveness, and Out and In, a romantic mystery-thriller.  As our Author of the Day, she tells us all about this book.

Please give us a short introduction to what Out and In is about.

Murder, betrayal, opera, romance...OUT AND IN takes readers on a suspenseful ride through Dallas high society, pro-football married life, and shady money deals. You'll fall in love with beautiful cellist Marie Donovan, as she and her handsome defense lawyer battle false murder charges, a psycho murderer, and a corrupt island banker. Will a journey to exotic islands clear Marie's name?

What inspired you to write about an amateur cellist who is jailed for murder?

At the time I was dreaming up OUT AND IN, I was on the board of an opera fundraising group. I thought having a society beauty who also played the cello would give me fodder for both the plot and ancillary characters. Opera fundraising was a world I knew, and they always say, write what you know.

Tell us more about Marie Donovan. What makes her so special?

In each of my novels, readers will find strong female characters who rise above tough circumstances. But these women always make the effort themselves. In this novel, Marie has help. But she's the one who reaches for her dream. When the novel begins, Marie is depressed and somewhat helpless. As the novel progresses, she gathers inner strength to face major hurdles. I'm a bit jealous of Marie, as she is a stunning beauty with tremendous musical talent.

What makes Marie and Ryan such a great team?

At first, Ryan Ingles is not at all what Marie expects. She knew of him years ago, and knew him from a distance during opera events. She also dislikes his wife. But when he comes to her aid, she finds herself inexplicably attracted to him. He's not handsome, like her late husband. But he has a caring, supportive side that Marie has never experienced. He's also willing to go to the ends of the earth to help clear her name. By the end of the novel, I was madly in love with Ryan. I hope to write a sequel to OUT AND IN and pair them again, since some key points are left open to resolution. (no spoilers here!)

Readers say that your story starts with a bang. Why did you take this approach?

I try to write as if my novel is a movie. When films open, there's a sequence that immediately grabs viewers interest. So I thought showing a beautiful woman, unfairly slammed in jail, would keep readers guessing.

Why did you decide to bring ex-pro football players and snobby, rich women into the mix?

Many years ago, I was a "football wife." That doesn't mean my husband watched too much football on TV. That means I was married to a hard-drinking NFL quarterback. The 15 years I experienced in the NFL's macho culture took its toll. I left the marriage, loving the man, but hating the man-child culture. I used my football experiences as a backdrop because I wanted to show Marie as she was with her first husband.

I also used my experiences as an arts volunteer to create characters that populate Marie Donovan's world as a Dallas society maven. Although I've met many wonderful friends through arts volunteerism, I've also met a few who wear their dollar value and status in the arts as phony badges of honor.

Lately, I'm a mad stock trader...not a "day trader," but what I call a "weekly trader." Online resources make investing much easier for novices like me, so I use a number of tip sites to help me choose my stocks. I'm also a twice-weekly lap swimmer (former competitive swim coach), and I love traveling with my husband Bill to play golf.

That photo was such a fabulous find. When my designer worried what sort of photo we might use for this story, I went to Shutterstock, entered "opera maestro," and that photo popped up. There Marie was, being played like a fiddle by a sexy maestro. My designer and I both loved it. The cover doesn't show up as well online as it does in print, which disappoints me. The print version is black glossy and stunning. When I do book signings, people gravitate to that cover.

Did you plan the story out before you started writing or did some of it just "happen" along the way?

I've learned to do a bit of both. When I begin a novel, I simply write to see what comes. Then I develop a roadmap for each chapter and character. The troublesome things are remembering eye color, hair color, ages, interests, and so forth. Along the way, I know my characters well enough, and know where I'm going with the plot, so my roadmap is set aside and I forge ahead. But for a good three-fourths of the novel, the roadmap keeps me in line. Otherwise, the characters can take you where you didn't plan to go. For example, I had intended for Marie to be the killer in this novel, but after the first 100 pages, my editor told me Marie was too sweet and sincere to ever be a murderer.

A part of the book is also set on exotic islands. Why did you pick this as a backdrop for your story?

This novel is half mystery, in terms of "who done it," and half thriller in terms of "finding the money." Marie desperately wants to clear her name from her late husband's Ponzi scheme dealings. I chose Seychelles Islands because it's a hotbed of international offshore banking. I had to research the financial ins and outs, but the islands also set the stage for the romantic aspects of the story. The annual Carnival parade just happened to coincide with my characters' visit, so I included details about that in the plot.

The first thing I tried to do as a child was to write a neighborhood newsletter. The second was try to write a musical. Along the way, the writer in me continued to bloom, although much later in life than I wanted. Marriage, child-rearing, and careers have a way of getting between a writer and her quest. Luckily I now have time to write. I'm pleased to have grown into my craft, but I'm always learning more.

Do you have any interesting writing habits? What is an average writing day like for you - favorite writing spot, best time of the day to write etc.?

Interesting? I don't eat some sort of weird snack when writing, but I have my own private casita office, and this is my treasured world. When I open that door, I sigh in relief because there are no dogs or husbands to interrupt my passion. I try to write four hours daily, mostly afternoons, but my biggest problem is watching the clock so I can still make dinner and spend time with my very supportive husband. (And feed the dogs too.)

My third novel is BACKSTORY, which falls into women's fiction or literary fiction, with a suspense subplot. In this story, a pretty single mom, Merry Matthews, faces life alone after a devastating divorce. With three teens to support, she tries screenwriting, but succumbs to her brother’s insistence that she get a real job. Little does Merry know but a serial killer is stalking her and her daughter, a scary turn that becomes the plot for Merry's Academy Award-nominated film thriller.