P.G Smith - Inspired by an Unforgettable Nightmare
Posted on 30th of July, 2019 by Naomi Bolton 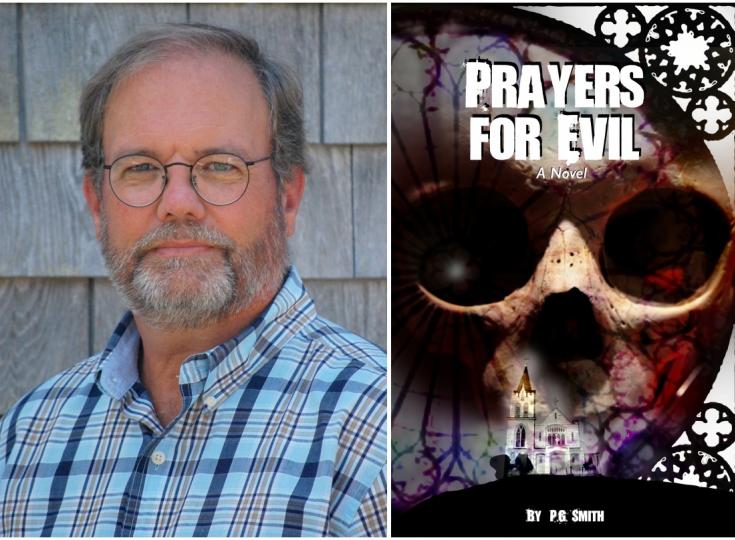 P. G. Smith is a former U.S. Army officer and educator. His work has appeared in many publications, to include Country Living, Military History, Career World, Canada's History, National Guard, ARMY, GX, and the Boston Globe. His concept for "Prayers for Evil: A Novel" began as a nightmare that he just couldn't forget. As our Author of the Day, he tells us all about it.

Please give us a short introduction to what Prayers of Evil is about?

Prayers for Evil is a classic horror story with a mix of some spicey romance, an intriguing mystery, and a touch of horror (without the gore). It tells the tale of a regular person who gets caught up in a web of mystery and intrigue that reaches from the Dark Ages to modern day New England. The main character is a single Dad struggling to start a new life after his marriage falls apart. A new job assignment forces him to relocate to a Maine village and he soon begins to appreciate the rustic charm and warmth of small town living. After meeting some quirky neighbors, he finds a beautiful, charming woman who has also experienced some of life's bumps and bruises. Just as he's begins to fall in love and think about settling down in this Maine town, strange accidents befall residents of the village. Soon his new love and even his little daughter are ensnared in the web of evil. Do those who have befriended him have hidden motives? Will he uncover the deep and ancient roots of the destructive curse in time to save his loved ones? Only the Prayers for Evil can solve this mystery.

hat inspired you to write this book?

I actually had a nightmare in which the villain materialized. It was so vivid that I quickly jotted down a short story. The short story grew into a novella, which evolved into Prayers for Evil. Between magazine articles I worked on it for many years as a sort of hobby, mainly during the fall, and had a lot of fun writing it.

Tell us more about Chris Murphy. What makes him tick?

Chis is everyman (and everywoman). He's a likeable, imperfect character in his late thirties who hasn't fared well in life's ups and downs. However, he's driven by his love for his daughter and his determination to get his life back on track whatever it takes. Chris is a person with deeply held values and a strong sense of right and wrong. That being said, he's perpetually late for everything, has a temper that flares now and then (but never at his daughter), and he's a bit too trusting of those who may take advantage of him. When faced with a crisis, though, he'll go down fighting rather than admit defeat.

You are a former U.S. Army officer and educator. How have your work experiences influenced your writing?

I guess I met Chris Murphy many times when I was in the Army - and sometimes he was a woman. I think there are many soldiers who are just plain good folks that haven't always gotten the best deal in life. They might not always do exactly the right thing, but they hold strong values and you can always depend on them to have your back in a fight. Readers might also note that a character with Down Syndrome plays a heroic role. My years as a special education teacher left me with profound admiration for young men and women who persevere to become loving, productive adults despite their limitations and challenges.

Why did you pick an old mill town in Maine as the backdrop for your story?

I live in central Massachusetts and coastal Maine. Ashton Falls is a combination of the images I see in both places. Also, I've always been fascinated by the mysteries and tales that lie hidden in old New England towns. Perhaps they're pretty quiet today, but once they witnessed Native American raids, witch trials, tar and feathering, the Underground Railroad, and other dark and secret events.

I'm a retired U.S. Army Brigadier General. During my military career I was the task force commander that responded to the 2013 Boston Marathon Bombings. Because of my experience, I teach Counterterrorism Strategy at Nichols College and taught at the U.S. Army War College. I also helped develop a United Nations peacekeeping force in Paraguay, a little-known nation that I grew to love during my time there. I continue to write non-fiction articles for publications like ARMY magazine, Military History, and other military magazines.

People compare your writing to that of Stephen King. Who are some of your favorite authors in the genre and why?

Stephen King is my Maine horror hero (pardon the pun)! I also enjoy the classic suspense of Edgar Allan Poe and the sensuous atmospherics of Anne Rice. However my favorite author is Graham Greene because of the moral ambiguity and the ultimate triumphs of his deeply flawed characters.

How did you manage to maintain an eery atmosphere throughout the book?

This is a great question. I had a plot sketch when I started this project, but the story took its own twists and turns as I wrote it. I didn't consciously involve myself in the story, it pulled me into it. When I it was finished, I felt a certain nostalgia as if I had actually lived the story's events.

Readers report that the story has a heavy Christian theme, but it appealed to non-religious people as well. Was this what you aimed for?

I have always found the mysticism and magic of religion to be quite frightening. I was raised in Catholic schools and the images of martyrs and miracles scared me to death and some nuns could be quite menacing. In fact, I remember having nightmares about living statues as a kid. Quite frankly, this novel is a bit of an allegory about the recent priest scandals of the Catholic Church, but I hope readers also note that there are positive characters who are priests as well.

I love Jennifer, but I struggled when I attempted to write from her perspective. I hope I did her justice, but I'm not a thirty-something woman and I never will be.

I wrote the first short story I ever published years ago one night after my wife and I put our babies to bed. I started at about nine o'clock and finished at four in the morning. Although I try to be disciplined and write for a proscribed time each day, I have to admit that I'm a binge writer. I find it tough to get started, but, once I'm creating, I find it hard to stop.

I'm writing a memoir about my 35 years in the Army - some funny stories, some not-so-funny. It's amazing how much you can remember once you start to write down events from the past.

My magazine articles are all over the web - just search for "P.G.Smith." I always love to hear from readers at [email protected] or on Twitter @P_G_Smith_