Richard Gleaves - Fascinated by the Legend of Sleepy Hollow
Posted on 26th of October, 2018 by Naomi Bolton 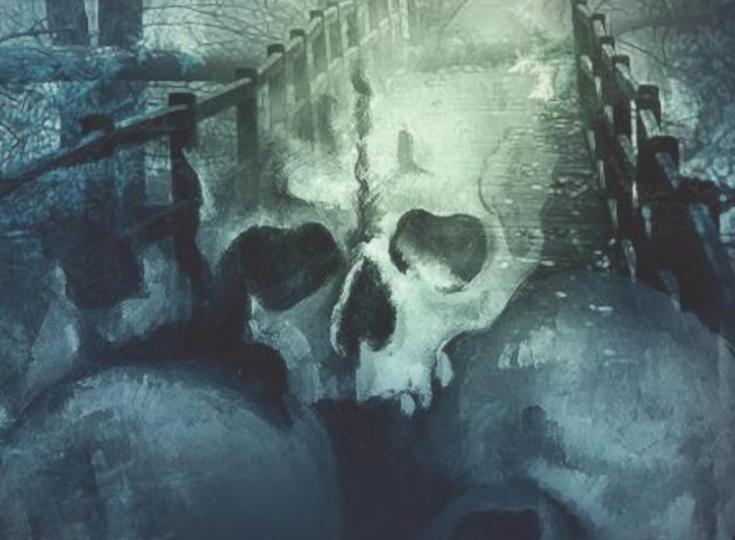 Richard Gleaves never planned to be a novelist, but one Halloween he visited the real town of Sleepy Hollow and something bit him. He was standing in the Old Dutch Burying Ground, which according to legend is the site of the Horseman's burial, when he was struck by a story, fully-formed, about the last descendant of Ichabod Crane returning to Sleepy Hollow. Returning home, he started typing. As our Author of the Day, Gleaves tells us all about the series.

Please give us a short introduction to what Sleepy Hollow: Bridge of Bones is about.

In Bridge of Bones, the Headless Horseman has risen and is lurking in the woods above modern Sleepy Hollow. My hero, Jason Crane, descendant of Ichabod, has fallen under the guardianship of Hadewych Van Brunt, who secretly controls the Horseman.

Tell us more about Jason Crane. What makes him so special?

Jason is gifted with the ability to reach into the past of things. At first, he would see glimpses of the past when he touched objects, but in Bridge of Bones his power develops new facets. He's a courageous young man, a lanky geek like his ancestor, but more thoughtful and sentimental than your typical action hero.

Did you always know you wanted to be an author? What inspired your debut?

I never planned to write novels. I started out as a composer. My breakthrough was my musical "Dorian" that debuted at the Goodspeed Opera House. But I found that in addition to music I loved writing the lyrics and libretti as well. I tried my hand at plays and found the form constraining. Only when I started my first novel, did I feel like I'd found my voice.

Where does your fascination with the Headless Horseman come from?

I had loved the "Legend of Sleepy Hollow" ever since I was small, and played the album of the Disney cartoon a thousand times. In my forties, I realized that I had stopped celebrating Halloween, so I took a three-day trip to the real Sleepy Hollow to explore and try to get my Halloween spirit back. It worked. I fell in love with the real town and was struck deaf dumb and blind by the potential in the Jason Crane series. I was standing in the Old Dutch Burying Ground when Jason first said hello to me, and he's been a constant companion for six years now.

How does Bridge of Bones tie in with the first book? Can it be read as a standalone?

Bridge of Bones can be read as a standalone, but it's always best to get the whole story. All you need to know at the beginning of book two is built in. I'm very careful to get all the necessary exposition out. I do think you'll enjoy it more if you start with book one though, so "Rise Headless and Ride" is also sharply reduced in price for the duration of the book two free promo.

How much research into the history of Sleepy Hollow did your books require from you? What was the most interesting aspect of this research?

The research has been the most exhilarating experience of the writing process, and maybe the most rewarding journey of my life. When Washington Irving wrote the original Legend, he was remembering the Tarrytown of his youth, the Dutch colonial village that existed in Westchester after the American Revolution. My starting place was the town as it exists today, and over the course of three years of work I slowly deconstructed the modern Sleepy Hollow to rediscover Irving's original. One you reach the end of the Sleepy Hollow trilogy, you'll be able to look at the modern map and see the colonial era town in it's street names and layouts. What makes the Jason series almost unique-- not just as a Sleepy Hollow retelling but as a work of fiction-- is that it is completely accurate not only to every tree and storefront of the modern town, but to every aspect of almost 400 years of its history.

Secret skills? I'm a pianist and a singer. One of my earliest jobs in New York City was performing on a banqueting yacht as we did circles around the Statue of Liberty. That's why there's so much music referenced in my work. My character Joey Osorio, Jason Cranes best friend, is made of all those parts of myself. He's a gay gravedigger who longs to play Hamlet and to hoof it on Broadway.

I'd love to sit down with Washington Irving and compare notes about why this one little patch of Tarrytown is so fascinating. He felt it too, when he visited the Hollow. There's a magic to the place that I've felt nowhere else. He loved it as I do. He's buried just up the hill from where I first envisioned the series. I'm proud to see my books on the gift shop at his Sunnyside estate.

My characters definitely have lives of their own. But thank God for that. The worst thing a writer can have is characters who don't have any agency. Looking over the series, it feels like I was just channeling this herd of very willful and gutsy cats, who range from small kids to eighty-year-old ladies to 300 year old goblins.

I am a creature of the night! I'm an all-night dusk-to-dawn writer. I always have been. I need the silence, and the sun is no good for writing spooky. For the Jason series, everything begins with the site. I would take weekly drives up to the Hollow for three years and act out the story in the real place. This meant hiking the woods, attending all the events, eating in the restaurants, and people watching in the park. It meant hours over old maps at the historical societies and a lot of poking around in places I didn't belong. I took audio notes down in the aqueducts and up in the lighthouse, and locked myself in the cemetery overnight to tell myself ghost stories. The last day of research on the trilogy was spent deep on the woods at the site of Ichabod's bridge, dangling my legs over the river. Thats where I wrote the climax. After puzling out the plot in the real site the writing itself is all legal pads and black coffee. The real magic happened in the real places.

The biggest challenge wasn't in "Bridge of Bones" but in Book Three "General of the Dead". It came very late, after my last research trip where I wrote the climax at the old bridge abutments in the woods. I knew I had captured the story and that it was fantastic but I suddenly hit a wall and couldn't write another word. Eventually I realized that after three years of writing I had reached the end of my time in Sleepy Hollow and I wasn't emotionally prepared for it. I had to step away and grieve, then put everything I was feeling into the final scenes. It truly was the writing experience of a lifetime.

Tell us about the book covers for this series and how they came about.

The first cover I did for Rise Headless and Ride was my own bad photoshopped monstrosity. The beautiful covers of the current editions are by MS Corley.

I've written novellas and such between Jason books, most notably "Under the Grassy Knoll", a short story newly out in audiobook that I think is some of my best work. I'm releasing my novel "The Journal of Tom Whills" in episodes. It's a time travel story about two aging geeks who go back in time and accidentally screw up the original 1976 Star Wars production. For that one, I'm back in research mode and I've made friends with quite a few Star Wars crew members. But my great love is still the Jason series. There's more stories to tell outside Sleepy Hollow, which is why I pulled up stakes and moved to Salem last year to live in a little house opposite a cemetery and behind the Witch Museum. "Blood to Drink", book four of the Jason series, which was released only two weeks ago, is set in Salem. Overall I foresee nine Jason books, three set in the Hollow, three about the witch trials, and a final trilogy incorporating the work of Edgar Allan Poe.

'The Jason Crane Series' Facebook page is where we all gather. That's where I post everything that doesn't make it into the books, where I do special offers, giveaways and contests, and where we chat about history, genealogy, philosophy, ghost stories, and everything else under the moon. Come wish us a Happy Halloween!