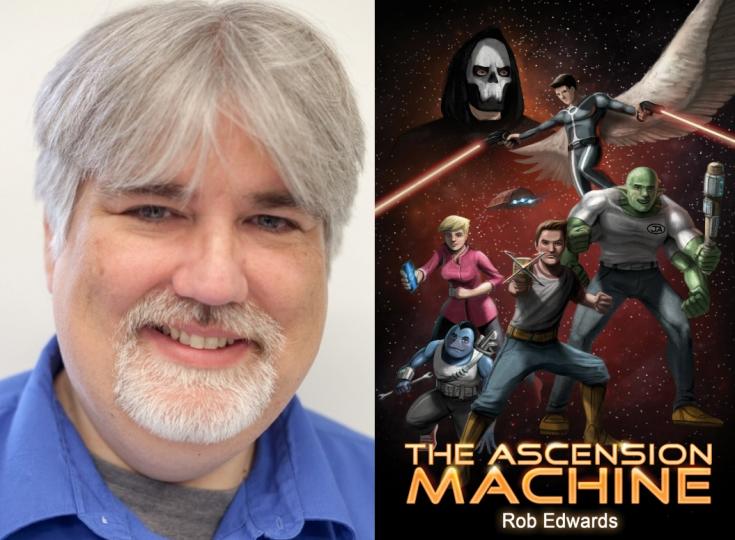 Rob Edwards is a British born writer and podcaster, living in Finland. His podcast, StorycastRob, features readings from his short stories and excerpts from longer work. His work can also be found in anthologies from Inklings Press and Rivenstone Press. His debut novel, the scifi superhero adventure The Ascension Machine launches September 2020. His greatest geek pride is his entry on wookieepedia, the a result of writing several Star Wars RPG scenarios back in the day. As our Author of the Day, Edwards tells us all about his book, The Ascension Machine.

Please give us a short introduction to what The Ascension Machine is about.

The Ascension Machine brings together all my favorite things in one place. It’s a fast-paced and fun adventure, about a young grifter who accidentally cons his way into a college for alien superheroes.

The Justice Academy is a college for superheroes from species across the galaxy. There, Grey finds friends and a place to belong, but it’s overshadowed by a lie. Despite his claims, he isn’t tech heir Mirabor Gravane, and Grey shouldn’t be at the Academy.

Taking risks to protect his secret, events spiral out of Grey’s control. When the real Gravane is kidnapped, Grey and his friends must come together to mount a rescue.

If he is to succeed or even survive, Grey must decide who he is, and does he want to be a superhero?

What inspired the creation of the Justice Academy?

I knew that I wanted the story to be about identity, not just in the classic secret identity superhero trope, but about following Grey as he finds out who he is going to be as an adult. Heading off to college or uni can be that moment for a lot of people, so it felt right to set it at a school.

As for the Academy itself, partly it pulls from my own uni experience, partly I’m inspired by other fictional institutes of learning. Partly, I’m trying to avoid too many Hogwarts comparisons. Mostly I’m just having fun coming up with class names. If you can write about a place that teaches classes on Rescueology, Grapnel Gun Basics and Crossover Etiquette, you just do, right? 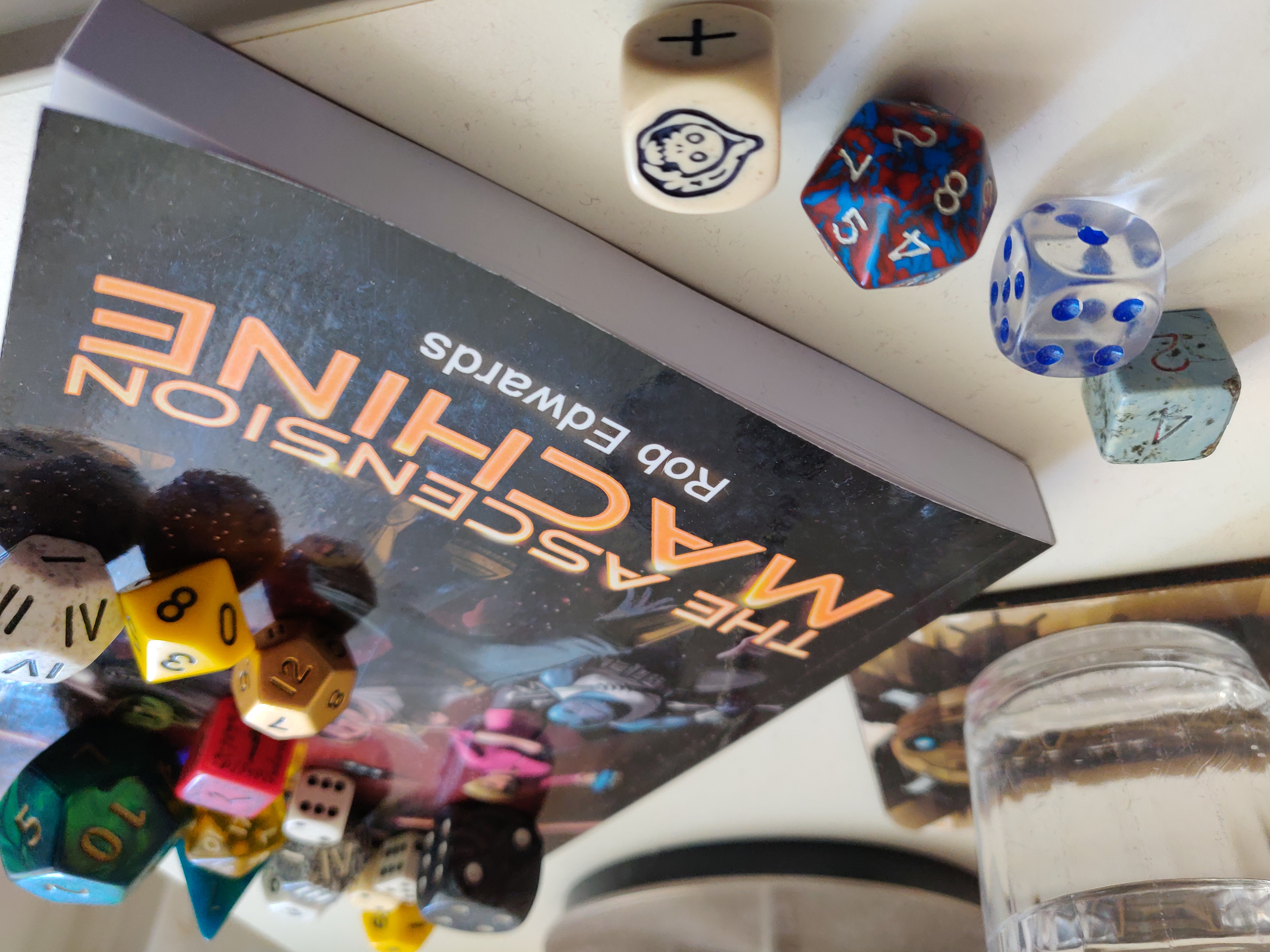 Tell us more about Grey. What makes him so special?

Grey may be a rogue and a grifter, but he has a good heart. His crimes are never very terrible and are usually conducted with charm and wit, relying on athleticism, not violence if things go wrong. He’s spent the best part of a decade traveling from one space station to the next, never really settling in one place too long. At the start of the book, he would (and does) say that he has an awesome life. He has low moments, but they never last long. He lives life with confidence and humor.

It’s only when he gets to the Academy, he begins to realize what he’s been missing out on home, friends, connections.

I’ve seen reviewers compare him to Jim diGriz from the Stainless Steel Rat and Aladdin from Disney’s Aladdin. Both comparisons amuse me, and they’re not far off the mark.

Tell us more about your podcast, StorycastRob.

Long before I considered myself a writer, I was a storyteller. Everything I write is written to be read aloud; my wife sat through two full drafts of The Ascension Machine! This year being what it was, I’ve not had as much chance to get out and do readings as I would have liked, but whenever I get the urge, there’s my podcast.

I started StorycastRob before I found other homes for any of my stories, and I love making it. If you want to chart my progress as a writer (and as a podcaster!) there’s the better part of a decade of my work on show there. Some of it I’m super proud of, some of it is just me playing with silly writing exercises, and very occasionally I’ll read other people’s work on it.

I’m slightly amused by the implication that writing is one of my secret skills! I’m not sure what other ones I have. I’d rank my drawing skills as above average, when I bake my lemon drizzle cake it tastes better than it looks, I run a quality game of Dungeons and Dragons. I was an ICT Trainer for twenty years, so I’m pretty good at the front of a classroom.

Oh! I know enough Finnish language to know that I can’t speak Finnish, which is quite distinct from not knowing the Finnish language at all. I’ve lived in Finland for almost five years now and despite making genuine efforts to learn, I remain totally baffled. Olen ihan pihalla. There’s always a bit of a Finland reference in my writing now. One of Grey’s friends at the Academy is called Pilvi, a Finnish name meaning cloud. 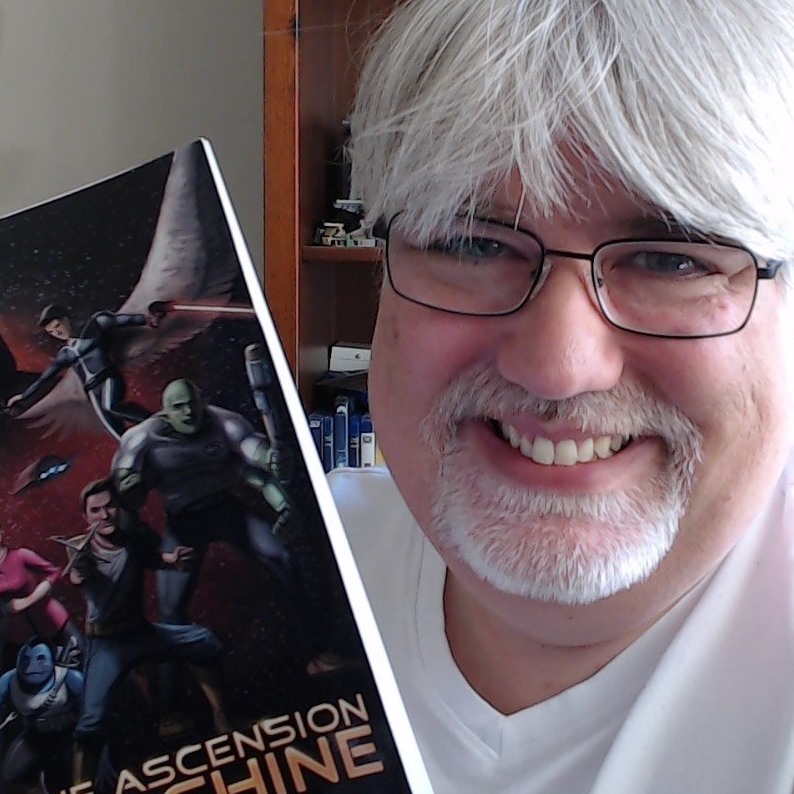 Oh, I confess it, all the fun. Playing in this world and with these characters brings together so many of the genres I love. Superheroes, sci-fi, grifting, all bound together with a sense of wonder, adventure, and discovery. When this cast is interacting, bouncing off each other, it’s such a joy to write. I really hope readers get that sense too.

Did you plan out the plot before you started writing, or did some of it just "happen" along the way?

I’m not a meticulous planner. There were certain story beats I had in mind before I started writing. In fact, I had the general shape of a trilogy of stories swirling around my head when I sat down to write The Ascension Machine. There are a few elements in the book that are setting up things for books two and three (although hopefully not in a distracting way). That said, I still managed to surprise myself a few times; there’s a relatively important character in The Ascension Machine who wasn’t in my original plan at all.

In which way is this a coming-of-age journey?

As I mentioned the book is all about identity, about my main cast moving into a world where they discover who they are going to be. It’s about Grey facing up to the fact that his actions have consequences and learning to take that responsibility.

But it’s about found family too, Grey has nobody and doesn’t realize what he’s missing until he befriends the Brontom Clone Warrior, Seventhirtyfour, the Zalex tech whizz Gadget Dude, and Pilvi a human agricultural scientist.

Readers say the book is fast-paced and kept them engaged throughout. How did you pull this off?

It’s not an aspect of my writing I’ve ever really analyzed. I think some of it comes from decades of running role-playing games, you get a sense of how long a scene can play before it’s time to move on to something else.

That said, an earlier draft wasn’t quite so fast-paced. An editor friend of mine who read it suggested I look again at how much time was spent planning the action and then doing the action, and that one of those things was more interesting than the other. She was right, and it’s one thing I keep in mind when I write.

When starting on a new story, what is the first thing you do?

Everything except sit at my keyboard! The flat is never tidier than when I’m starting a new writing project. I love to write, but I hate to start writing.

To be slightly less flippant about it, my writing process starts long before I sit in front of my keyboard. An idea rattles around my head for weeks normally before I write a single word. I don’t write reams of notes before I start, but the idea does have to survive in my brain long enough to make it to the page. If it does, that means I have a strong idea of the direction I’m going before I start.

I have just finished my second draft of the sequel to The Ascension Machine. Will be sitting on that for a few weeks before I edit the next draft, which will likely be the one that goes to my publisher for review. The book is called The Crossover Paradox and follows Grey into his second year at the Justice Academy. In the meantime, I will either dive straight in to book three or maybe take a little time to work on a side project, part of the reenergizing of my podcast I mentioned earlier.

The place I’m most reliable about posting updates is probably Twitter, you can follow me there @StorycastRob for updates about my podcast, YouTube channel, and new stories. Or just stop by to say hello! If you want to follow my podcast, you’ll find it on iTunes, Spotify, or at storycastrob.co.uk

If you want to learn more about the Justice Academy, its world, and people, I have an in-universe micro-site on my blog: storycastrob.co.uk/JusticeAcademyz 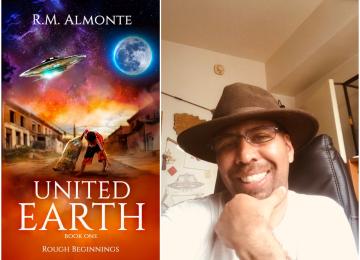