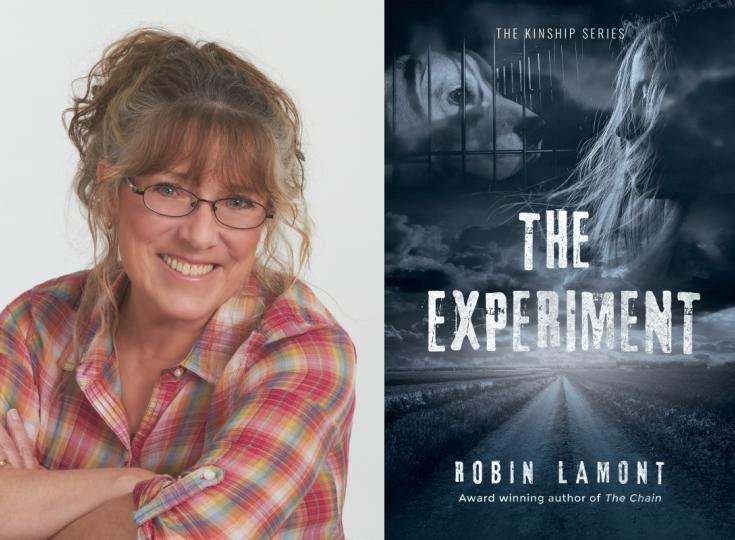 ROBIN LAMONT’S first novel If Thy Right Hand was awarded the Gold Medal in the 2012 Independent Publishers Book Awards and named Best of 2011 by Suspense Magazine. Her diverse careers as actress, private investigator, and prosecutor all serve as inspiration for her novels. She performed on Broadway in several shows, and her original cast recording of “Day by Day” from the musical Godspell has drawn fans from around the world. She worked undercover at a private investigations firm tasked with tracking down importers and producers of counterfeit products. Then after earning her law degree, she practiced as an Assistant District Attorney in New York. As our Author of the Day, she tells us all about her book, The Experiment.

Please give us a short introduction to what The Experiment is about.

A rookie investigator working covertly for an animal protection group suddenly vanishes. The group’s success relies not only on mutual trust but also on an ability to assume and maintain an undercover persona. So, when the young man’s handler Jude Brannock goes searching for him and finds out that he might have been running a scam on her and the group, it rocks her. In Jude’s pursuit of what happened, she discovers a drug company’s experiment that has gone horribly wrong.

I’m a big animal lover, and this is the 3rd book of a series in which the central character, Jude Brannock, is an investigator for an animal protection group. I thought that there are so many cops, PI’s, lawyers, etc. who seek justice for human victims of crime in fiction, there should be a protagonist looking out for the animals. In The Experiment, I sought to deepen her character. Jude is driven by a strong moral compass and her empathy both for the animals and the workers that are victimized by corporate greed. But her career of fighting animal cruelty has been psychologically wounding; she relates more to animals than she does to people, and her intensity can veer into recklessness.

In the past, you have also performed on Broadway and practiced as an Assistant District Attorney - how has this influenced your writing?

I do seem to have jumped around quite a bit career-wise. It might be the Gemini in me. I left college to join the original production of Godspell (and the film) singing the iconic song, “Day by Day.” After a few other Broadway roles, I transitioned into working for a private investigator who hired actors to go undercover. Those experiences of my own undercover work are front and center in the series – the undercurrent of danger, constant tension, fear, and even loneliness.

My time as an assistant district attorney also brought me into the world of law, criminals and cops, and I learned pretty quickly that people aren’t always what they seem. I think what ties all these together is an understanding that people are remarkably complex. And I try to dig into the relationships and emotion at the core of each human story.

Who is Jude Brannock and what makes her tick?

An activist is someone who cannot help but fight for something. That person is not usually motivated by a need for power or money or fame, but in fact is driven slightly mad by some injustice, some cruelty, some unfairness, so much so that he or she is compelled by some internal moral engine to act to make it better.

Jude is an activist. She has worked her entire life to bring attention to animal suffering and environmental degradation. And the world doesn’t often reward people who make them uncomfortable, as activists tend to do. But she is compelled to keep fighting, even if it costs her emotionally and physically. Her flaw is that she is reluctant to recognize her own weaknesses and ask for help now and then.

I am a tennis junkie. I play in my local league and am somewhat embarrassed to admit that I don’t really like the social aspect of the game while on the court. Am very happy to chat with friends before or after a game. But once I step on the court, I take the game very seriously and enjoy the strategic part of the sport. I also love to knit but am notoriously bad at finishing projects.

Why suspense? What drew you to the genre?

Quite simply, I’ve always been a fan of mystery and suspense. I was one of those kids who brought a flashlight under the covers after bedtime to read a Nancy Drew book. I read them all! And that love of intrigue is what probably led me into working as a PI and then as a criminal prosecutor, rather than those careers driving my choice to write suspense.

Among the wealth of characters in this book, who was the most challenging to create?

Jude was definitely the most challenging since my goal was to create a main character who works in a field that not many people know about. In my research and travels as an animal lover, I’ve met a number of investigators for animal protection groups who are out there every day trying to hold abusers accountable. It can be a dangerous and difficult job. So, I’m trying to bring Jude to life, with all her passion and her own personal issues that get in the way, and still create a character that will resonate for readers.

The Experiment is the third book in the Kinship series. Can it be read as a standalone? How do the other books in the series tie in with this one?

Any of the three books The Kinship Series can be read as a standalone. Indeed, that was quite important to me as I sat down to write each one. As an avid suspense reader myself, I appreciate books in a series that don’t need to be read in order or require a great deal of “background” information on the characters in order to enjoy the book. Jude Brannock, of course, is the main character in the other two Kinship books, but their stories are unique to themselves.

I’m working on a treatment for a TV series loosely based on the characters in all three books – a team of activists who step in to stop animal cruelty or environmental destruction when the law can’t or won’t.

Where can our readers buy The Experiment, discover more of your work or interact with you?

And I am always happy to connect with readers via Facebook or email!

Here is a link to me singing Day By Day in the film – just for fun!