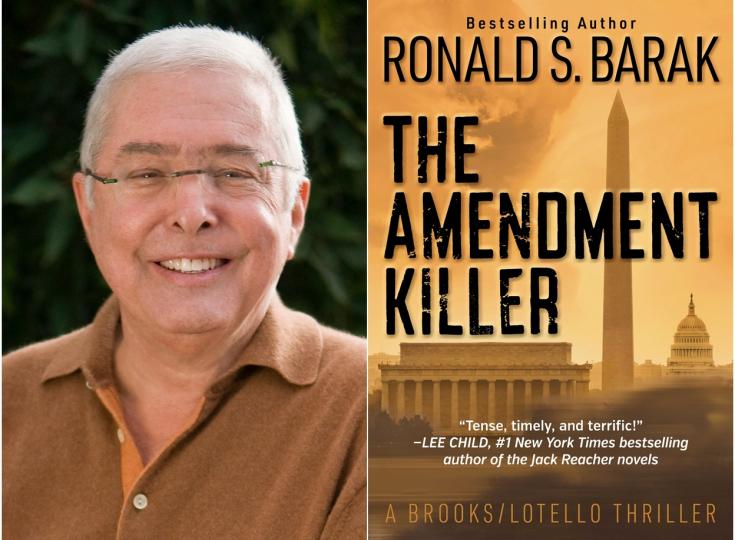 Ron Barak writes legal thrillers and takes pride in keeping his readers at the edge of their seats into the late hours of the night. His latest novel, The Amendment Killer, is no exception. In this book, Barak calls upon his real world legal ingenuity and skill to craft a 28th Amendment to the U.S. Constitution criminalizing political abuse and corruption that Constitutional scholars across the country are heralding as a highly plausible answer to the political chaos destroying the very moral fiber of the country today. As our Author of the Day, Barak tells us all about it.

Please give us a short introduction to what The Amendment Killer is about.

Ultimately, The Amendment Killer is about priorities, whether the best interests of our country is worth a youngster's life. Congress asks the U.S. Supreme Court to invalidate a Constitutional amendment seeking to criminalize abuse of power on the part of our political representatives. Because of the importance of the case, the Supreme Court agrees to hear and decide the case on an expedited one week live televised basis. As the case opens, the Supreme Court Justice expected to cast the deciding vote in the case receives a text on his private number that begins "We have your granddaughter. Here's what you need to do." The book itself begins with these words as well as the kidnapper makes ready to send this text. When viciously kidnapped, the 11 year old granddaughter, who is diabetic, does not have enough insulin to survive the week the Court will take to decide the case--even if the grandfather does as instructed and even if the kidnappers will return the youngster if the grandfather capitulates.

I am an experienced Constitutional lawyer and a political junkie. I was motivated to draw attention in an entertaining fashion to how our dysfunctional government might be called to task, and "fixed." Like the granddaughter, and 30 million other Americans, I am also diabetic and wanted to draw attention to this medical condition. I have committed 50% of the proceeds of the book to diabetes research and education.

Your readers describe your work as a cross between Agatha Christie and John Lescroart. Do you have any favorite authors? Which authors would you say had an influence on your work?

I love reading suspense, mystery and thriller novels. I have read many, if not most, of the bestselling authors in these fields and admire them one and all. I have learned something about writing from all of them. Lee Child, NYT #1 bestselling author of the Jack Reacher novels, was kind enough to read and comment on an earlier draft of The Amendment Killer. His comments had a definite influence on the final version of the novel. John Lescroart, Andrew Gross, and Jon Land, three incredibly able and successful writers, have also been generous with their time in helping me with my writing.

Why the Supreme Court? Why did you use this backdrop for your book?

Like many Americans, I am incredibly disappointed in our political leaders. Instead of truly focusing on public service, too many of them are instead focused on how they can take advantage of their positions for personal gain. I wanted to draw attention to how our dysfunctional government might better be regulated. As a student of the law, it was inevitable that the Supreme Court would be centrally involved in The Amendment Killer.

Readers report that the book kept them at the edge of their seats into the long hours of the night.  How did you manage to keep the suspense and the pace high throughout?

As a fan of suspense and thriller novels, I love reading books that keep me on the edge of my seat. For me, the test of a good book is whether I can't bear to put it down. It was my goal to keep readers of The Amendment Killer feeling the same. That objective is front and center in every scene I write. I constantly use my own reactions as a reader to measure whether I think I am achieving this kind of tension. I am beyond thrilled to hear from readers of The Amendment Killer who didn't want to put the book down, didn't want it to end, can't wait for the next one. What more can a writer want than to hear things like that? And to know that readers are lining up for The Puppet Master, the next in the Brooks/Lotello thriller series and the prequel to The Amendment Killer, which will release late next Spring.

The Amendment Killer contains a lot of psychological aspects and is very thought-provoking.  What do you hope readers will take away from this?

That things are not always as they seem. That people we think of as "good" are not always that "good,” that people we think of as "bad" are not always as all "bad.” That people need to stand up for what they think is right. And--that a thought-provoking novel can nevertheless be a real page turner at the same time. Those two objectives are not at all mutually exclusive or inconsistent. I am particularly grateful to those readers who have been kind enough to post reviews on The Amendment Killer saying both that they couldn’t put the book down for its suspense and tension but also really enjoyed what they learned about our political systems and the Supreme Court at the same time.

Like Cyrus Brooks, the protagonist in The Amendment Killer, and the Brooks/Lotello thriller series, one of my best skills, and certainly a secret one, is that I’m a dreamer. I like to think I could be a world class dancer, musician or athlete. Alas, I have no dance or musical skill whatsoever, which doesn’t stop me from watching, listening and dreaming, but I was a modestly accomplished athlete in my day, a member of the 1964 U.S. Olympic Team.

How much of your own experiences have you incorporated in the book?

You included Epigraphs and took care to introduce the history of The Constitution and The Amendments.  Why did you take this approach?

I’ve always enjoyed Epigraphs. When I see them in other books, I always wonder how the author came upon them and thought to include them. I think of Epigraphs as mini-Prologues, some form of clue or insight about the story about to be told. It was natural for me to use the ones I did in The Amendment Killer. I used three because I couldn’t decide on one and I thought they all served a fundamental purpose and role in introducing the novel. The quote from the Declaration of Independence was intended to illustrate what many of our present political leaders seem to have forgotten, and how far they have strayed—and the fact that the 28th Amendment I crafted in the story could actually take flight as it does in the novel. The remark of former U.S. Supreme Court Chief Justice Charles Evan Hughes was meant to remind readers of The Amendment Killer that, at the end of the day, Supreme Court Justices are human and it is their human instincts and beliefs that drive the law and not the other way around. Finally, I used Charles Lamb’s observation that “lawyers [he supposed] were children once” because I like that thought and because it perhaps explains why Brooks, the lawyer, was drawn to Cassie, the kidnapped youngster he didn’t even know.

Friendships and family relationships play an important role in this book - why did you find this so important?

Because I think friendships and family are the very center of our society.

How much fun and insightful writing, and engaging with readers, is, and how unpleasant but necessary having to promote what you write can be.

All of the above. I’m an early morning person. I mostly like to write, and do my other work, early in the morning. I don’t care to write or work in the evenings, but I do when I need to. I like to write at least four or five hours in one sitting. However, when I get on a roll, or when I’m on a deadline, I can easily go fifteen or sixteen hours at a single time, and well into the evening. I actually write sitting on the floor, my back propped up by the sofa behind me and my laptop in front of me on a coffee table. (It works for me, although sometimes I will break it up and sit at my desk.) I do all of my writing on a laptop. I find the keyboard to be therapeutic. Besides, using a pen is way too slow. However, I do often write notes here and there in hand, usually on a post-it note, physical or electronic, especially when I hit upon a thought or an idea and am afraid I will lose it if I don’t write it down. (What were we talking about?) I’m a “pantser,” not a “plotter,” which is to say that I tend to write by the seat of my pants and not from an outline. I have no patience to outline what I’m writing. I usually know how I want to start, how I want to finish and who my main characters are, but that’s it. I don’t need to write those things down to remember them. I just start in the beginning, move toward the ending, and take the surprises as they fall out on the page. My only real goals are to keep the tension and surprises building, the way I like it as a reader.

I’m polishing up The Puppet Master for its Spring 2018 release and I’m cogitating about the next in the Brooks/Lotello thriller series. I’ll start to write whenever what I’m cogitating starts bubbling over.