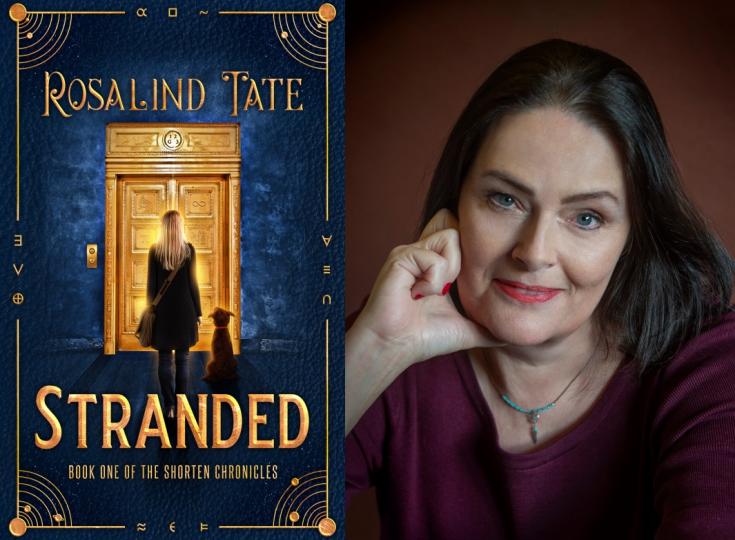 Rosalind Tate is the author of "The Shorten Chronicles" -- the exciting new romantic, time-travel series featuring Sophie Arundel and her dog, Charlotte. Rosalind has a tolerant husband and two utterly gorgeous dogs. As our Author of the Day, she tells us all about her book, Stranded.

Please give us a short introduction to what Stranded is about.

The idea came into my head a few years ago when I was watching Downton Abbey on TV. How would a modern girl cope (or not) if she found herself in a grand house a century ago?

My main character, Sophie, falls through a portal with her dog and is trapped in the past with a fellow student, Hugo. He’s a historian so understands some of the aristocratic rules of the grand house, but Sophie finds it much harder to fit in. She cherishes her independence and doesn’t want to ‘marry well,’ which is her only career option. And while they’re juggling all of this, Sophie and Hugo are trying to work out how to get home.

I did a lot of historical research because I wanted the reader to feel they were really in the past, and I’m relieved that, going by Stranded’s reviews, I’ve succeeded in that.

After I started writing, I realised that a love-triangle was inevitable and I went with it. I love the contrast between Hugo, a millennial like Sophie, and Freddy, who was born in 1904. This 3-way friendship will change and deepen as the Shorten Chronicles plays out.

What inspired you to write about someone who fell through a hidden portal?

I’ve got a thing about portals and doors. It started when I was five with The Lion, the Witch and the Wardrobe, and that fascination has stayed with me, so I enjoy TV shows like Stargate where intrepid explorers step through a circular gate and travel to distant planets. I’ve also developed an interest in the real-life maths and science behind the concept of parallel universes, although my understanding is definitely more Star Trek than Stephen Hawking!

The portal in the Shorten Chronicles is at the heart of the story. The portal isn’t magic. It works within the laws of physics. So, if Sophie can unpick its secrets, she’ll be able to get home.

Tell us more about Sophie Arundel. What makes her so special?

She’s gutsy and determined, an accomplished kickboxer and she instinctively sides with the underdog. Before she fell through the portal, she campaigned for animal rights. Her personality helps her to triumph over a lot of the challenges that are thrown at her, but more often her flaws put her and the people she loves in harm’s way.

In many ways, she’s ‘everywoman;’ Sophie reacts like most people would when trapped in an alien past. So, she’s not ‘special.’ Well, apart from one strand of her DNA… but saying any more would be a serious spoiler!

Why did you pick 1925 England with an alternate timeline as the backdrop for your story?

The novel started as a straightforward time travel romance set in 1913, but then I thought … what if this wasn’t our past at all, but a parallel universe where the Great War didn’t happen? That war caused terrible suffering and millions of deaths, and it irrevocably changed society. I couldn’t resist changing history. Otherwise, Stranded’s parallel universe is very like ours but time there passes slower, so the alternate England is a century behind.

I’d love to say that I’m a domestic goddess but my husband does the cooking!

I was an army officer many years ago so I could probably shoot reasonably straight if I had to.

Why do you write time travel?

I’ve always loved time travel stories, but I wrestle with the paradoxes and consequences. A quantum computer couldn’t track all the effects that someone just travelling would bring about, never mind interacting with people in the past and future. Here in 2020, the scientific community is so convinced parallel universes exist, they’re searching for evidence of them in the Large Hadron Collider in Switzerland. Going with parallel universes made the story real for me.

If the main character in a book is very like its author, creating a fully rounded character may be easier. For example, Deborah Harkness, the author of A Discovery of Witches, is a distinguished history professor, and her protagonist is also a history professor…

But Sophie is very different from me. I needed to discover how she’d react in any situation — and why. I also had to learn about her parents, her aunt, and her friends at school. None of these are prominent in the novel but they all impact on Sophie’s character.

Do you create the entire storyline before you start writing, or does some of it just "happen" along the way?

Stranded just “happened” and I went with the flow, so when I finished the first draft, I had to do extensive editing which took months. And as it was the first book of a fantasy series, there was complex world-building to do: the architecture of the portal, the layers of logic and facts that Sophie and Hugo use to figure out how the portal works, and the nature of Janus, the Roman God, who Sophie and Hugo will discover more about in later books. I don’t think I could have done all that planning in advance and fortunately, most of it grew organically out of the characters and the plot as I went along.

Now the world-building is largely done, for Book 3, I’ll definitely be drafting the plot, character and chapter outline before I write it… Much less stressful!

Readers love Charlotte. Why did you decide to include her in the story?

Charlotte is based entirely on my eldest dog, Bella, but Charlotte’s actions and her role in the Shorten Chronicles has also been influenced by the work of a wonderful scientist: Jane Goodall.

If you haven’t heard of her, Jane conducted a six-decade study of wild chimpanzees in Africa and debunked the then prevailing assumption that animals only acted on instinct and that humans were uniquely special and different from other animals. Jane proved that chimpanzees had different personalities and interacted with other chimpanzees to vanquish rivals and gain love and status. And because of her tireless campaigning, there are now no laboratories in the USA that experiment on chimpanzees. Dogs aren’t chimpanzees but Jane’s research carries over. Anyone who’s reading this and has a dog will know this already!

Charlotte is just a regular dog but (I don’t want to give away any spoilers here) she’s not in the book by accident.

The cover needed to shout ‘fantasy’ and as some readers dislike dogs, in fact or in fiction, it had to signal that Charlotte was part of the story so only dog-loving readers would buy it. I also wanted to show the portal and the symbols and sketches on the lift doors. The pictures are clues as to where Sophie and her companions will go in the Shorten Chronicles, and Sophie will need to figure out every one of them to get her Happy Ever After.

I can’t take any credit for making the cover. A talented artist friend of my daughter did the pictures on the doors and “187designz” designed the cover from scratch. And I love it!

Stranded is the first book in your The Shorten Chronicles. Can it be read as a standalone? How do the other books in the series tie in with one another?

Stranded can be read as a standalone and the main subplots come to a resolution at the end of the book, but I also hope that most readers will want to read Book 2.

The books would be most enjoyable read in order. However, in my mind’s eye I imagine a bored traveler picking up Book 3 or Book 7 in a railway station, and I’d like that traveler to be able to enjoy the book on its own merits.

Sophie, Hugo, Freddy (and Charlotte) all change and grow over the series and though each book has a plot arc of its own, the series has an overarching plot arc — investigating the portal’s secrets. At the end of the series, the love triangle is also resolved. Readers have asked whether I’m on ‘Team Hugo’ or ‘Team Freddy,’ but my lips are sealed!

I start work at around 4 am while my family is asleep. When my head is in 1925, any well-meant interruption (‘How’s the book going?’) can stop my chain of thought for the day. I write in a shed in the garden until 11 am, then I have coffee with my long-suffering husband, and in the afternoon I do marketing and publishing admin and reader’s emails. I’m not superwoman, so I’m in bed by 8 pm most nights. I take it easy at weekends and spend time with my family. That’s not typical at the moment. We’re in lockdown here in England and because two of my grown-up children are miles away, we can only Zoom.

I’m editing Book 2. I can’t say too much about it but it’s full of action from the first chapter. Readers will also find out if Sophie marries Freddy and whether she and Hugo can solve enough of the lift puzzle to get home. 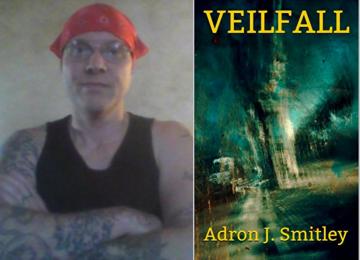 Adron J. Smitley - Intriguing Fantasy in an Immersive world
FEATURED AUTHOR - #1 best-selling fantasy author Adron J. Smitley loves and writes fantasy, as well runs an advice blog for writers on everything from plot, character, and story structure. Adron also authored the critically acclaimed 'Punching Babies: a how-to guide' a teaching manual for writers on how to best plot their stories through every essential stage of dramatic conflict. As our Author of the Day, Adron tells us all about Veilfall.