Rusty Blackwood - The Misadventures of a Colorful Retired Government Official

Rusty Blackwood - The Misadventures of a Colorful Retired Government Official
Posted on 7th of May, 2020 by Naomi Bolton 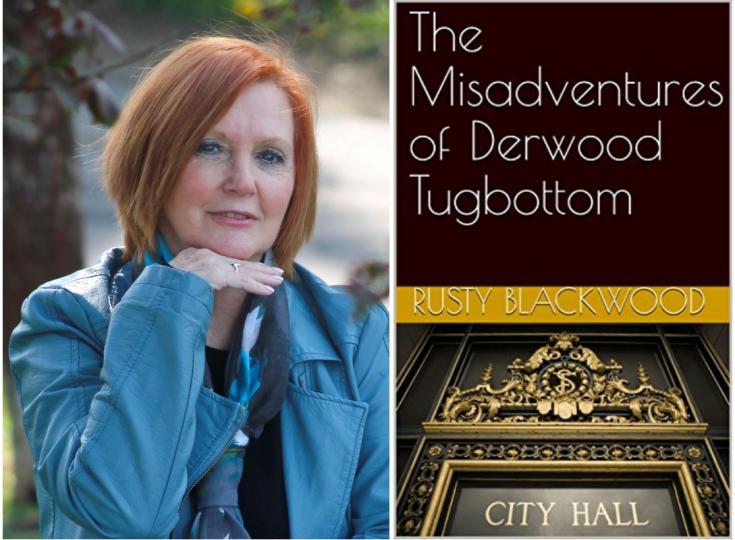 Canadian author Rusty Blackwood has written twelve titles thus far ranging in genres from traditional and contemporary poetry, children's short stories, adult comedy, and romantic fiction drama, the latter being her favorite to write. Miss Blackwood became a serious writer in 2001, and published her first title in 2009. Rusty lives in St. Catharines, Ontario, Canada, and when not at her keyboard, enjoys art, music, nature, horses, and spending time with family, friends, and her loyal cat Tipper. As our Author of the Day, Blackwood tells us all about her book, The Misadventures of Derwood Tugbottom.

Please give us a short introduction to what The Misadventures of Derwood Tugbottom is about.

The character of Derwood Tugbottom came from my brother's active imagination. In 2011, my brother had made a silly phone call to my eldest daughter-in-law, whom he always loved to tease, posing as "Derwood Tugbottom" with intent to have some fun. She is the shuttle driver for a posh senior's retirement center in the city where we both live, and my brother, as Derwood was calling to lodge a complaint with her concerning her driving. According to "Derwood", who had been aboard the bus, was stating the current ride had been careless and after disembarking at the center, was checking the back tire by the curb when she started the bus, and in putting it into gear, let it roll backward over his foot, pinching his toes, and ruining his shoe. He was calling to demand compensation. My daughter-in-law has call display, so she knew it was my brother, but went along with the ‘plot’. My brother continued in character until he had had enough and they both had a good laugh. That Christmas, my daughter-in-law, who had told me about the silly phone call, asked if I could write a short story about it to give to my brother as a gag gift, which I did. He got a huge kick out it, so in early 2012, I decided to write a comedy short based on that phone call, and that is how The Misadventures of Derwood Tugbottom came to be. 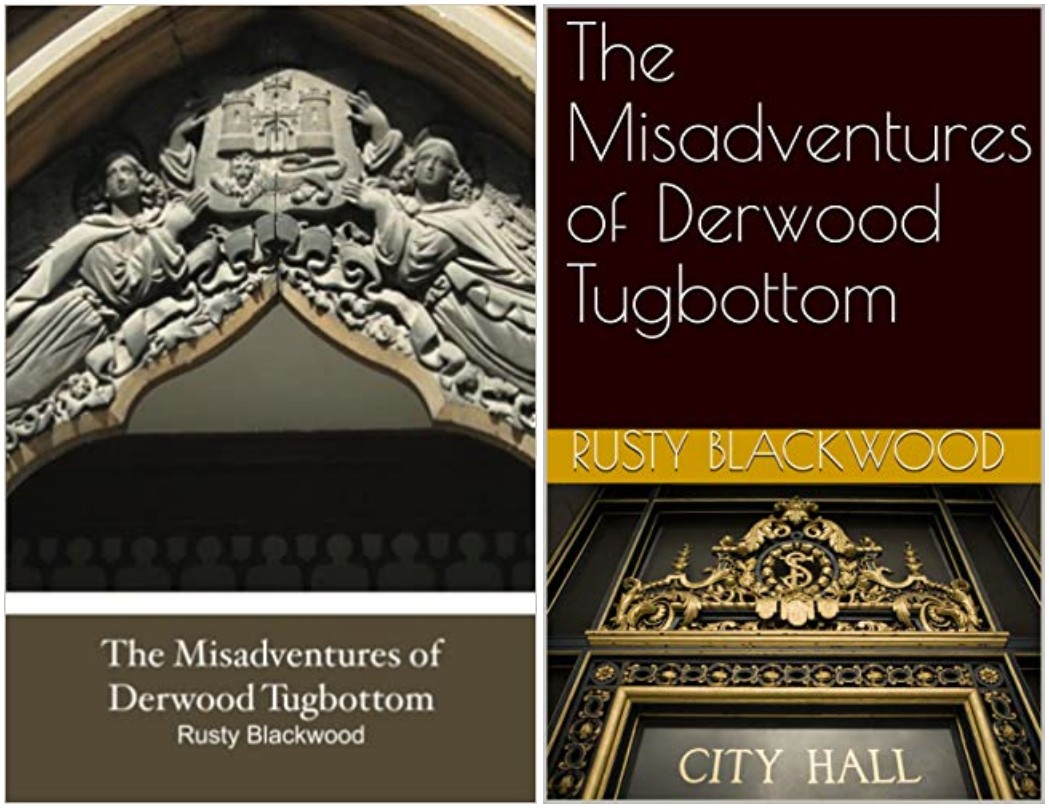 What inspired you to write an adult comedy short centering around a newly retired government official?

As I explained in the first question, Derwood was initially my brother’s creation, but when I decided to write a proper story, I asked him how he perceived Derwood, and if he actually existed, what would he be like, personality, where was he employed, etc. From that, I decided to build on what my brother had described and decided to make Derwood into a colorful, outspoken, over-bearing retired government official, as well as the eccentric, demanding person readers came to know in the initial story. The Misadventures of Derwood Tugbottom is the first of two Derwood comedy shorts that followed in my Derwood Comedy Series. A fourth is expected late this year or possibly early 2021.

How much of your own life experiences have you written into this book?

None of my own in this book. However, as I based this first Derwood short on the actual phone call between my brother and my daughter-in-law, I decided to build on that, create an assortment of ‘seniors’ who lived in a fictional retirement center in a fictional place and setting that were based on places in actuality. I was surprised to see how well Derwood was received by readers who continued to ask for new adventures by the eccentric Englishman, and that was how the Derwood Comedy Series came about which consists of The Misadventures of Derwood Tugbottom, Derwood Returns, and Derwood Goes Caribbean.

I am a retired musician/vocalist who worked for many years throughout south-western Ontario, Canada, with my family band, The Midnight Ramblers from 1964 to 1977, and the country/rock/blues band MIRAGE from 1980 to 1984. I am also an Interior Decorator.

When did you become a writer?

I always loved to write from the time of grade school, however, my life took me in a different direction. I always wrote, poems, short stories, etc. whenever time allowed, but I finally became a serious writer in 2001 at the age of 51 and a published author in 2009.

Yes, often. Derwood is one, and three of the main characters in my first romantic fiction drama, Passions in Paris: Revelations of a Lost Diary. This has also happened in my latest novel, the 5-star romantic drama, The Perils of Autumn. I find it quite amusing, as I may have written certain characters a particular way but as the story moves along, they seem to plot their own course. I’m sure it’s the same with many writers.

If you could spend a day with Derwood J. Tugbottom, where would you take him?

Tons of great places here in Niagara, but I believe I would take him to the local historic village of Niagara on the Lake for tea and scones. He would fit right in as he adores a great cup of tea properly served, along with browsing curiosity shops and Millinery shops. He likes hats and is rarely seen in public without one.

Yes, it is Derwood’s famous quote: “Retirement isn’t always a peaches and cream delight; it can often be nothing more than sour grapes.” Derwood had high hopes of a wonderful retirement, even though he was forced into retirement before he chose to be, but his plans never seem to materialize the way he hopes.

I wouldn’t say a struggle, but I do have times where I find words not coming easily, or where I’m not sure how to express a certain area of a story. Stress can be a factor, especially with the Covid 19 that is about, yet I refuse to be made afraid. However, it can cause problems when one is trying to immerse themselves into a certain frame of mind that stress or worry is not allowing. When this happens, I usually step away from my keyboard, take a few deep cleansing breaths, or go for a walk in nature. I find it helps to calm me and clear my mind so when I return to my work I can carry on.

Before I retired from my business, I could only write after work and on weekends which often found me at my keyboard in the wee hours of the morning. Since retirement, I write within the hours I gave to my business, but if I find the creative juices flowing, I will stay at my keyboard much later. Freedom of time is wonderful, and I am blessed to have and enjoy that.

I am writing a new novel, titled Return to Autumn, which is the follow-up novel to my latest 5-star-award-winning romantic drama, The Perils of Autumn. The new novel sweeps the reader back to the characters and settings in Perils of Autumn, picks up four years later, and carries them through to the end of the touching story that takes place at the fictional thoroughbred racing stable, Landon Lawns Stables, located just outside Lexington Kentucky in a posh community known as The Meadows. The story revolves around nurse Autumn Leeves, and Cyril Landon, a much older English equestrian master whom Autumn marries and with whom she has a family. The stable also employs Duff Taylor, a world-renown jockey who is tops in his field, but he also carries a dark secret revolving around an unresolved racing incident from his past that he will go to any length to protect.

You may visit me at my official website: http://www.rusty-blackwood.com where you can interact with me, check out my events and happenings on my Journal/Blog, check out my assorted book titles, and contact me through my Bio. You may also connect directly to my Twitter and Facebook from my website’s homepage. I write poetry, children’s short stories, comedy, and my favorite, romantic fiction drama. All my work is available on Amazon.