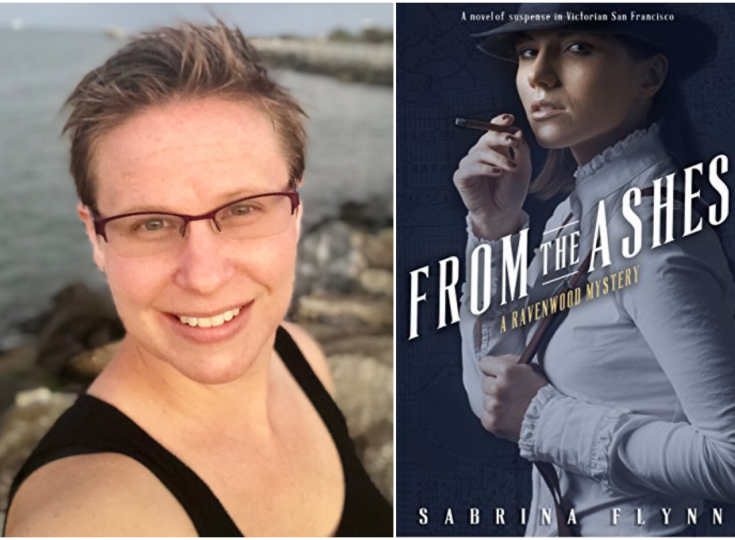 Sabrina Flynn is the author of Ravenwood Mysteries set in Victorian San Francisco. When she’s not exploring the seedy alleyways of the Barbary Coast, she dabbles in fantasy and steampunk and has a habit of throwing herself into wild oceans and gator-infested lakes. She lives in perpetual fog and sunshine with a rock troll and two crazy imps. She spent her youth trailing after insanity, jumping off bridges, climbing towers, and riding down waterfalls in barrels. After spending fifteen years wrestling giant hounds and battling pint-sized tigers, she now travels everywhere via watery portals leading to anywhere. As our Author of the Day, she tells us all about her book, From The Ashes.

Please give us a short introduction to what From The Ashes is about.

An enigmatic detective and a headstrong heiress clash in a battle of wits. Murder, mayhem, and a dash of romance in Victorian San Francisco. An “action-packed mystery” (Kirkus Reviews) that’s first in a series!

Atticus Riot is a gambler turned detective who put away his magnifying glass after the death of his partner. But when the forty-year-old bachelor returns to San Francisco to finalize his early retirement, he’s soon drawn into a dizzying search for a missing heiress.

Mrs. Isobel Kingston is a singular woman who disappears under circumstances as murky as the ever-present fog. To find out what became of her, Riot’s powers of deduction will be tested and he’ll be forced to confront his own murky past.

I think mainstream history paints a very different picture than fact, so I wanted to portray the past as it was—diverse and messy. There’s a lot of books out there about proper ladies flouncing around solving murders in between fancy parties—Ravenwood Mysteries is not one of those series.

Tell us more about Atticus Riot. What makes him so special?

Atticus Riot is something of a mystery in the first book. He’s haunted by the traumatic murder of his partner and his memories of the event are incomplete, so he’s very much a man who needs answers but isn’t quite ready to face his demons. Over the course of the series, his past is slowly revealed and readers learn more about a detective, who at first glance, seems like a quintessential Victorian gentleman.

Why Victorian mystery? What drew you to the genre?

The Victorian era shares a lot of similarities with the fantasy genre, which was what mainly interested me when I was younger. Historical mystery requires a surprising amount of world-building and has the same grittiness and lawlessness that you find in fantasy worlds, so it wasn’t much of a stretch for me to start writing in the Victorian era. I like that it doesn’t rely on forensics and technology too. Although some forensics were being used in 1900, it still wasn’t widely accepted, so the mysteries themselves rely more on deductive reasoning than technology and things like DNA matching.

In From the Ashes, one of my main characters ends up in the San Francisco Bay in winter. One of my beta-readers at the time got back to me and said I needed to edit out that scene because the character would freeze to death or drown or be eaten by a shark. We went back and forth for awhile, and finally, some weeks later, I jumped off a ferry sans wetsuit at Alcatraz and swam to Aquatic Park. The chapter stayed, and it sparked my obsession with open water swimming and cold water swimming.

I’ve escaped from Alcatraz multiple times, swum the Golden Gate, completed two marathon swims, and (much to my readers’ horror) will often break ice to soak in a freezing pond in the middle of winter. I love the ocean and the vast majority of my year round swimming is done solo. I’m also an avid trail runner.

Why did you pick turn-of-the-century San Francisco as the backdrop for your story?

The era and location is a mystery writer’s dream. It’s a clash of the wild west giving way to an age of modernization. Mainstream history usually only covers the Gold Rush and 1906 Earthquake, but the decades between is a fascinating time period. You can find everything from newspaper editors running around shooting at each other to pirate egg wars (complete with a canon) to a bubonic plague outbreak.

The Ravenwood Mysteries series tackle tough subjects like homophobia, prostitution, the mistreatment of children and women, slave trafficking, injustice, racism, police corruption, political corruption, and graft—all packed tightly into a relatively small city in an era where people were still alive and wild from the Gold Rush days and heyday of cowboy outlaws.

Readers often describe the series as unique to mystery and ‘like nothing I’ve ever read!’

How much research did his book require from you to make the history part of it ring true?

SO much research. I can’t even begin to guess at how much research I’ve done for the series (nearly nine books now!). But to give an example… I once spent three hours digging through newspaper archives to find out whether pleasure sailboats could dock at this now nonexistent dock in 1900 San Francisco. It did not matter to the plot. It was for a single sentence.

Per my kids: She shuffles around the house muttering to herself and forgets what she’s saying mid-sentence before wandering away again in a daze and leaving us to wonder what she wanted us to know.

And when I get stuck on a plot point, I go for a long run or swim, where I usually work through whatever is giving me issues.

From the Ashes can definitely be read as a standalone, but I’m a huge fan of overarching mysteries and plots, so while each book has a mystery that’s solved, it leaves readers wanting to know more about the characters. No matter the backdrop, the characters are everything in my books, and they’re constantly growing and changing. I’m very much a character-driven writer, and the characters are as much a mystery as the mystery itself.

I’m currently working on Ravenwood Mystery #9. The working title is ‘A Grim Telling’. After that I plan on diving into the next book in my Gaslight Fantasy series, then (hopefully) writing a mystery set in 1920s Paris.

They can find out more at www.sabrinaflynn.com