Shane Wilson - A Journey Through Music and Magic

Shane Wilson - A Journey Through Music and Magic
Posted on 27th of March, 2021 by Naomi Bolton 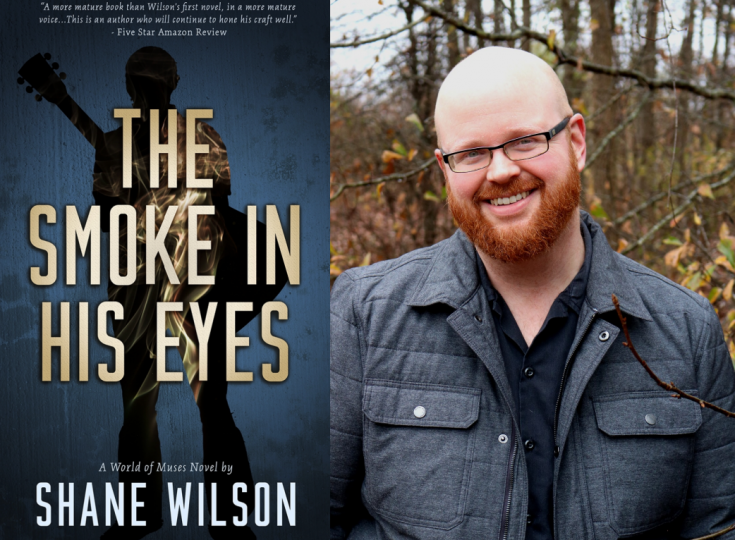 Shane Wilson is a storyteller. No matter the medium, the emphasis of his work is on the magical act of the story, and how the stories we tell immortalize us and give voice to the abstractions of human experience. His first two contemporary fantasy novels as well as a stage play, set in his World of Muses universe, are currently available. Born in Alabama and raised in Georgia, Shane is a child of the southeastern United States where he feels simultaneously at-home and out-of-place. He graduated from Valdosta State University in South Georgia with a Master's in English. He taught college English in Georgia for four years before moving to North Carolina in 2013. Shane plays guitar and writes songs with his two-man-band, Sequoia Rising. He writes songs as he writes stories--with an emphasis on the magic of human experience. He tends to chase the day with a whiskey (Wild Turkey 101) and a re-run of The Office. As our Author of the Day, he tells us all about his book, The Smoke in His Eyes.

Please give us a short introduction to what The Smoke in His Eyes is about.

The Smoke in His Eyes is a story about two musicians who get into music for different reasons. TJ pursues music toward an artistic end and Lila pursues music for financial gain. Both pursuits are noble in their own right, but what the characters learn about themselves and about the pursuit of art takes them on a journey toward a more genuine and more sincere art.

What inspired you to write about a musical prodigy whose senses are overrun with intense hallucinations.

The novel was born out of a thought experiment. I had just published my first novel, A Year Since the Rain, and I was struck by a series of questions. What triggers creativity in people? And what compels some of those people to share their art with the world—exposing them and their creations to a myriad of public reactions. TJ was the first character to be born out of this thought. I knew that I wanted TJ to experience something traumatic as a child, and I wanted that trauma to unlock these abstract visions that he was unable to control. I also knew that I wanted TJ to have an intimate relationship with inspiration—as in, I wanted there to be a character who was the literal personification of inspiration. This character is Muna, a visual artist and bartender. Muna helps TJ find his way through these intense hallucinations. She helps him make sense of them, and from that, he is able to write better music.

Tell us more about TJ - what makes him tick?

TJ is the product of a privileged but hands-off family. He was always financially taken care of, but his parents were mostly absent from his childhood. To fill this void, he poured himself into music—specifically, guitar. He becomes technically proficient. He can play any solo. He can read any piece of music. When he gets into college to study music, he meets a bassist named Lila who challenges him to unlock the emotion in his creations. This is ultimately frustrating to him until he meets Muna who is able to more effectively help him work through his complex visions.

Who is Muna and what makes her so special?

Muna is, for lack of a better word, a Muse. She was trained in the art of inspiration, and she knows how to help artists discover their truest and most honest art. For TJ, she is the literal embodiment of inspiration, and once he has written the song that she was meant to help him with, she disappears. She forces the reader to grapple with those great and old questions: Where does inspiration come from? What do we do if it leaves us?

Love, inspiration, and loss are pretty big themes in this story. Was this intentional?

Oh, absolutely. I was really trying to explore inspiration, and I think love and loss are explicitly tied to that. I think we all feel a cathartic compulsion to explore our emotions through some outlet. For some of us, that is art. Regardless, loss and love are, I think, some of the more powerful motivators for artists. This story absolutely explores the intersection of these emotions and how they may trigger the inspiration to create in a person.

Secret skills, huh? I’m not sure. I play guitar, but I don’t necessarily try to hide that from people. I’m not sure I have any secret skill, honestly. I made a wooden box in shop class when I was in high school. Maybe that counts? I spend too much time listening to podcasts and analyzing film? I am really good at coming in second during a riveting game of Fortnite? Take your pick, I guess.

Does your book contain an underlying message? What do you hope people will take away from this?

I think so, but I’m not sure that the book is delivering the same message to every reader. I hope people read the novel and consider their own creative impulses. I want the book to be reflective, not prescriptive. There is no right or wrong message here. Take from the experience what you need or want to.

Why Magical Realism? What drew you to this genre?

I spent a lot of time in college studying magical realism. I wrote my master’s thesis on it. I think that you tend to internalize whatever you consume, and then that stuff works its way into what you create in interesting ways. I think that’s probably why I was drawn to the genre. I had read extensively in the genre, so I felt comfortable playing in that sandbox.

“As good as an artist can be at expressing emotion, one of the things that makes an artist an artist is the ability to tap into emotion at a different level than most, which can open a chasm or artery or some other equally exposing thing that drops them to some place or exposes them to something that they can’t articulate, no matter how good they usually are with their words or their charcoal or their guitar. And when the artist retreats, he’s figuring those things out. And when he returns, it could be the beginning or the end of anything or everything.”

I like these sentences because they explore the complexities of allowing yourself to feel everything completely and honestly. Artists explore the human condition in a way that professionals in other fields don’t. As we write, we experience the emotion of what we create. This can be painful, and the exercise can result in many different outcomes. This passage speaks to that experience.

It also speaks to what it’s like to be in a relationship with a creative—their emotional ebb and flow creating some bit of chaos in the relationship. I’ve been guilty of these retreats. Having a partner that is empathetic to the process is incredibly important. Having a “home base” that we can return to when we’re ready is comforting.

Muna was definitely the most challenging in this novel. Anytime you are creating a magical character in a world of normal people, I think that poses challenges. You have to figure out how to make this character’s magic feel like a realistic part of the world’s texture. This requires a bit of finesse, and it’s something that will probably continue to challenge me as long as I work in this genre.

Absolutely, they do. At the same time, I don’t do a ton of planning when I’m first starting a project. I have a general sense of where I want everyone to end up, but I don’t do extensive outlining or anything. I enjoy the journey, and all of the little surprises the characters spring on me along the way.

I teach college. During the school year, I have anywhere from 100-150 students at a time, and they are all writing research papers and all of that stuff. For ten months of the year, I’m not doing very much writing because all of my mental capital is going into responding to student work. I have the summers off, so this is when I write the bulk of my long-form fiction. I treat it like a job. I wake up, make coffee, go to my office, and I write 3,000-6,000 words. This is my daily workflow over the summer months. There is nothing interesting or quirky here. Just work. 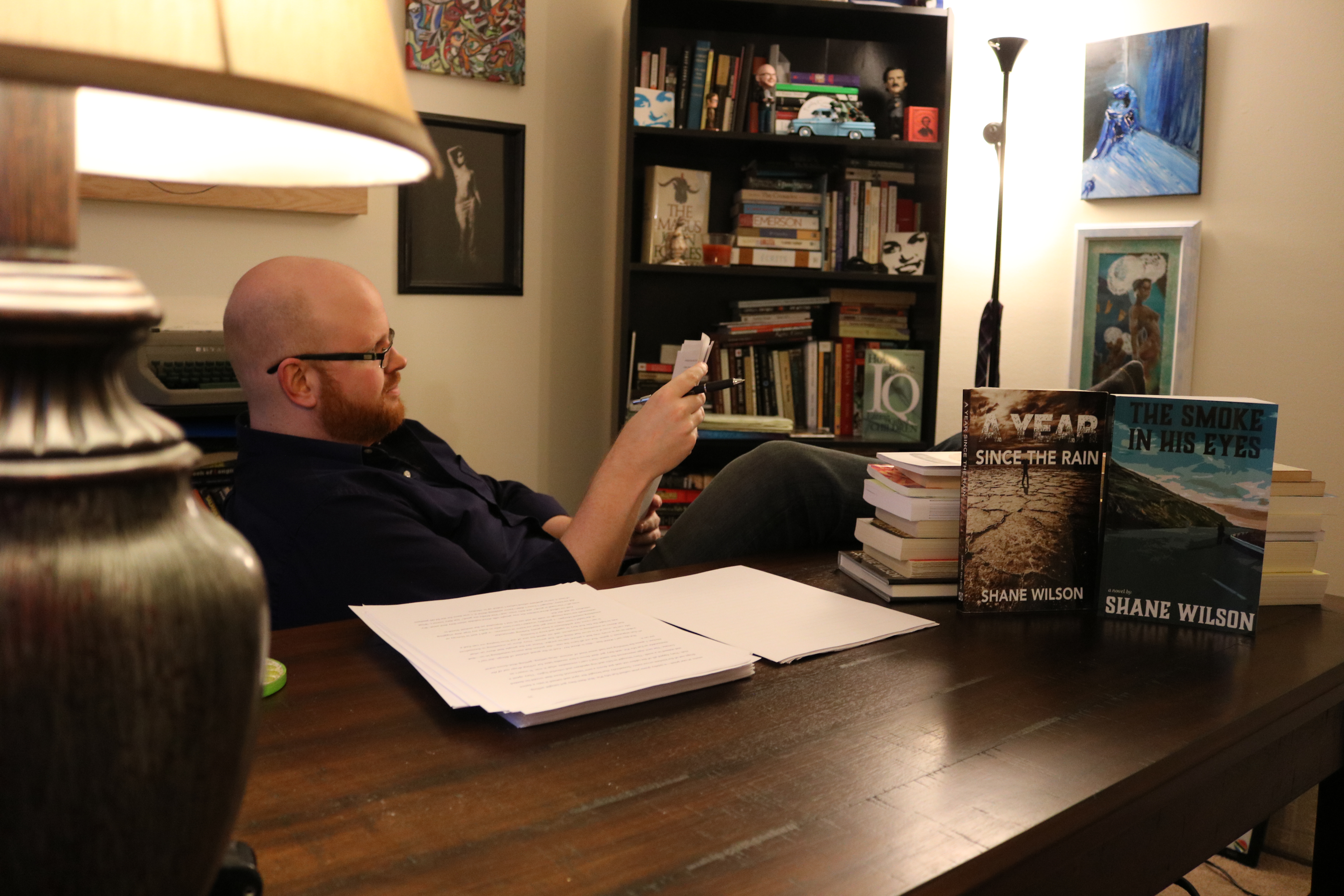 I have just released an album of original folk-rock songs with my band Sequoia Rising called Of All the Things I’ve Ever Said, I Mean This the Most. Otherwise, I am working on final revisions for my third novel. I should be sending it to the publisher in the next month or two.

I am on most social media under the handle @ThatShaneWilson. People can also find me over at www.shanewilsonauthor.com 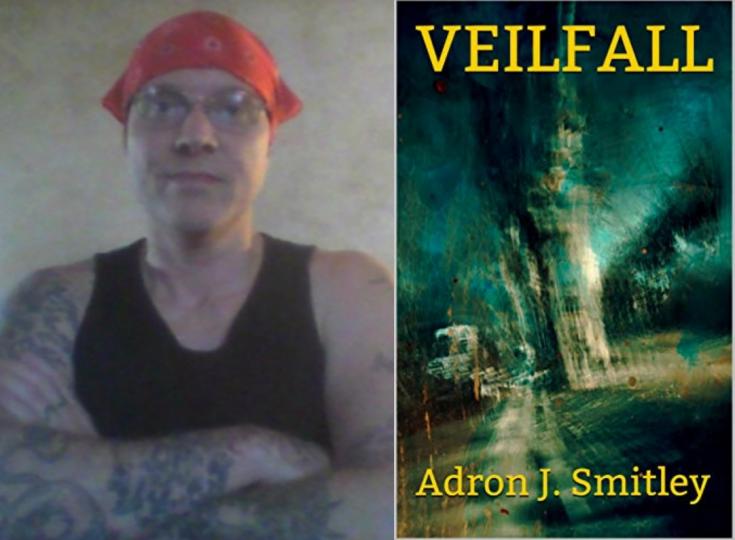 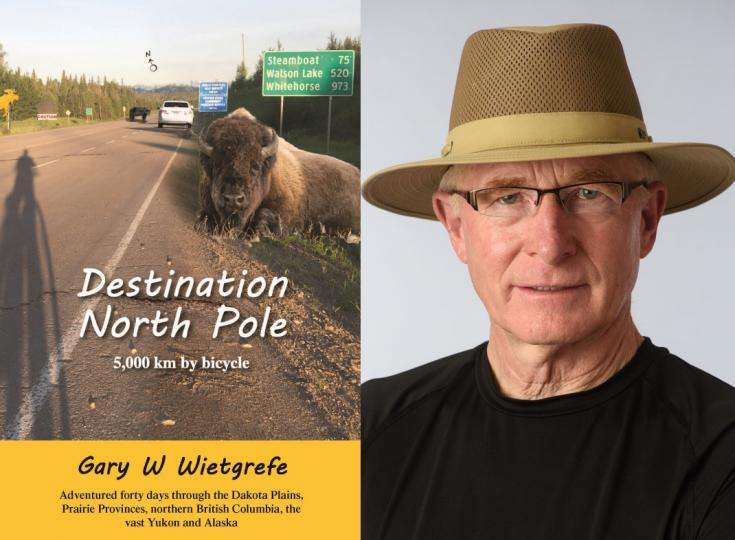 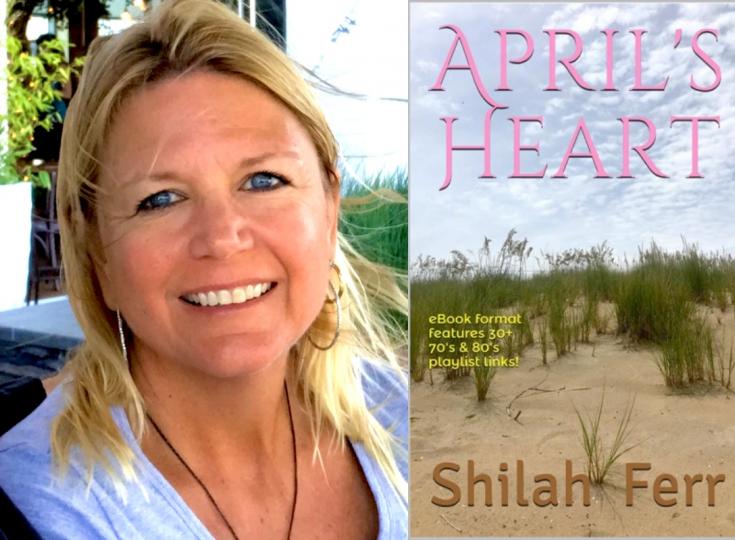 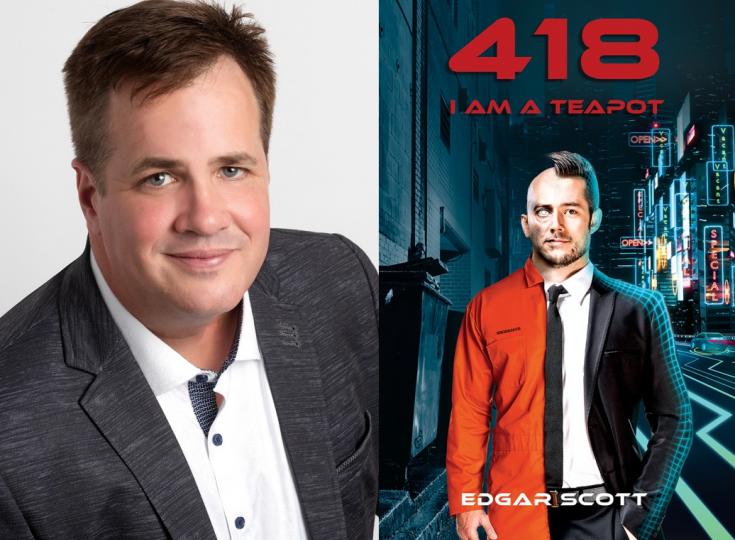