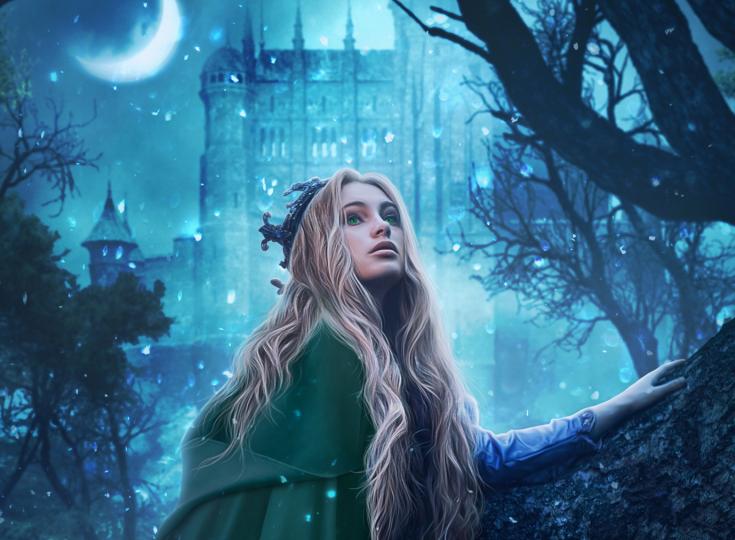 Fascinated with history and the medieval era, Shantal's stories alway include action/adventure, political intrigue, plenty of romantic tension and great kissing scenes. She loves reading and writing so much that she earned an M.A. in English and has been developing stories ever since. As our Author of the Day, Shantal tells us all about her latest medieval romance, Bitter Kingdoms.

Please give us a short introduction to what Bitter Kingdoms is about.

Bitter Kingdoms is a love story, a very passionate, but clean, medieval romance. A fun, fiery sidekick character in the story chastises Nicholas, the princess’s love interest: “Need I mention that you two love birds that you are on opposing sides of a great war…” It’s about two people who stumble onto each other by accident and fall desperately in love. Meg, the princess, and Nicholas, a captain in the invading army, have no idea who the other is. They never understand that their greatest love could also be their greatest threat.

What inspired you to write about a princess in disguise?

I think female characters in fiction are far more interesting when they have freedom to move around, especially when you’re dealing with characters from a historical perspective. Back in the day, women were enormously confined and controlled by men. I wanted to explore how a young woman would handle the effects of war on her people and, ultimately, how she would handle falling in love with a stranger.

Tell us more about Princess Meg. What makes her so special?

Meg is awesome! I have really enjoyed creating her character. She’s everything I’d like to be. Smart, spunky, hard-working, brave, slightly spoiled (but not ruined by it), rebellious, and disobedient. She does a few things her father asks her not to (he’s trying to keep her safe), like sneaking out of the castle to help her people. Her father absolutely adores her and she is beloved by the people.

Why did you pick a medieval setting as the backdrop for this book?

I find the medieval period in history absolutely fascinating! I also really loved how well George R. R. Martin brought the medieval period to life in Game of Thrones. We were both inspired by the Hundred Years’ War. A fun fact: my now grown sons were absolutely crazy for The Lord of the Rings films when I was writing Bitter Kingdoms. I think their enthusiasm and willingness to talk about the story deeply affected my writing. I fell in love with that world as well, all the action, romance, and a sense of insurmountable adversity.

Who is Captain Nicholas Sheppard and what makes him tick?

Nicholas is my dreamy warrior. He is also a highly skilled soldier and spy, as well as a captain in the army that invades Meg’s country. He is very good at what he does, a fine leader, snatching victory for his country when it seemed certain they would lose. When he meets Meg and falls in love with her, he becomes tormented. He would love nothing more than to run away with Meg, but he feels equally responsible to the men in his command.

The book contains a lot of twists and turns. Were they all planned out or did some of them just "happen" while you were writing?

When I started writing Bitter Kingdoms, I had a beginning and an ending. That’s it. I wrote way too much and ended up cutting almost half the book. It was very hard for me to do that, but what I had left was more sharp and focused. I realized that I could fine tune more carefully and create better twists and turns than what I had started with.

Besides writing, I am a gardener. I LOVE flowers and creating beautiful outdoor spaces. This time of year, I do a lot of downhill skiing. I feel very fortunate to be able to spend my time doing things that make me happy. I have two wonderful sons (they grew up on me), and a new daughter-in-law, and we enjoy spending time together as a family.

Why did you title the book Bitter Kingdoms?

I had a very hard time deciding on a title for Bitter Kingdoms. Everything I could think of was either too cheesy or already the title for another book. I tried to focus on the romantic aspect in a title, but it just wasn’t working, so I decided to focus on the over-arching theme, and that is two kingdoms at war. I added A Medieval Romance as a subtitle because I hoped readers would understand that even though there is action and political intrigue, romance is at the heart of the story.

Hands down, the most fun I had writing Bitter Kingdoms was creating the characters. There are the lead characters, of course, but there are also sidekick characters, ancillary characters, evil characters. It was so fun to dive into different psyches and try to figure out how those characters would react in a given situation.

In your personal life, do you believe that love conquers all?

That’s such an interesting question: Does love conquer all? In my personal life, yes, love has conquered all. I feel extremely blessed to have married the love of my life and we’ve tried to share our love with others. I wish love could conquer all in the real world… That may have been why I wrote about it.

How much research did this book require from you to make the history feel authentic?

I built my story around a single historical event, The Battle of Agincort that was fought in 1415. Shakespeare glorified it in his play, Henry V. The characters and the setting are completely imagined, but I tried to create a world that would’ve been similar to Europe during that time. Whenever I wrote about architecture or wardrobe or weapons, etc, I tried to stay consistent with that time period.

I am NOT a disciplined writer! I wish! I’m terrible at keeping to a schedule. I do make goals every week, a word count or a certain number of chapters, and I can usually keep to that if nothing else in my life comes up. Sometimes, I get an idea and I have to go with it. I definitely write in the moment.

Presently, I’m writing a contemporary romance set in Maui! I’ve been thinking about this story for a long time and had to put the sequel to Bitter Kingdoms on the back burner to get it written this month. It’s part of a “Billionaire” and “Bucket List Locale” collection of romances that I’m working on with a group of wonderful romance writers. Mine is scheduled to release at the end of July. Perfect timing for a great summer beach read.