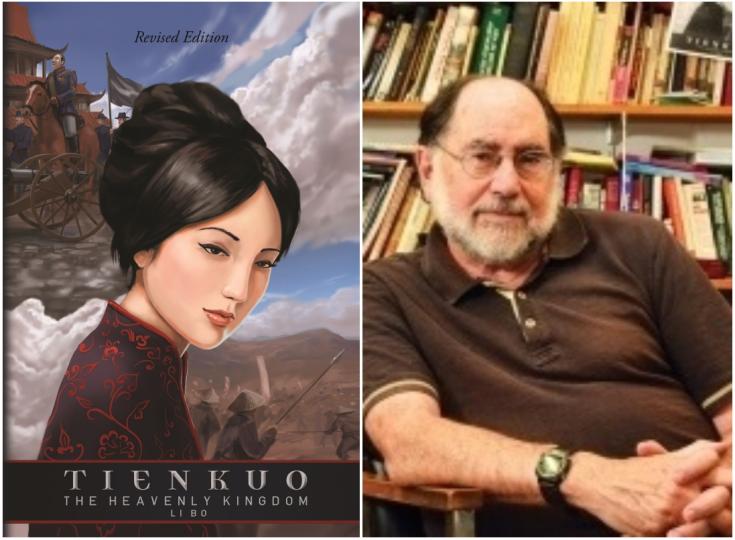 Dr. Steven A. Leibo, who writes fiction under the name Li Bo, has been obsessed with history ever since his imagination was captured by the story of King Tut and his fabled tomb in the fifth grade. From then on, Leibo's was a life caught up with trying to figure out how to make a living teaching and writing about history. That meant of course not only decades of schooling but years of reading not only the books of professional historians but the wonderful works of historical fiction produced by writers from Irving Stone to Robert Graves. Eventually starting his own efforts writing as a professional historian and a writer of historical fiction. As our Author of the Day, he tells us all about his book, Tienkuo The Heavenly Kingdom.

The novel, the first in my Sino-American Tales, is largely the story of three young people, one American, Boston born, though Hong Kong raised and two young Chinese who find themselves caught up in the drama of China’s 19th century civil war.

What inspired you to write about people who attempt to bring Christianity to nineteenth-century China?

The shear drama of China having undergone a full-scale civil war between the forces of the Manchu Imperial Dynasty and the followers of a failed Confucian scholar who claimed to be the little brother of Jesus Christ demands the telling. And this case, the fact that so few know the story of the struggle - that lasted longer and was far more deadly the American Civil War of the same era - makes the story even more compelling. Indeed, the tale is so unbelievable, I have had readers thinking I made the entire drama up rather than fitting my fictional tale into a real event.

How much research did this book require from you to get the history right? What was the most interesting aspect of this research?

What makes this particular work of historical fiction especially unusual is that its inspiration began with my having done professional doctoral work in the field to produce a different book of professional history. But in writing that effort it became obvious the tale was so compelling that it really deserved a fictional version that could go far beyond the limitations of a work of non-fiction. So, in that sense, this work is a product of doctoral level historical research even as the tale itself, hopefully goes far beyond that with what many have found to be a very compelling work of historical fiction.

Tell us more about Jason Brandt. What makes him tick?

Jason Brandt’s story is at the heart of the entire Sino-American Tales, that is the question of identity. Jason is an American who knows nothing of America even has two friends, the brilliant and beautiful Black Jade and Jason’s companion Wu don’t fit into the world of Chinese traditions they themselves were born into. Indeed, that theme, the search for identity continues throughout the entire series.

Where does your fascination with History come from?

Not sure I would consider them secret, but I love cooking and virtual reality simulations and spend a lot of time using my Oculus Quest II and even have a haptic vest where on occasion I spent my time in the first century Roman Colosseum fighting it out with gladiators.

Perhaps not so much “challenging” as fascinating was my effort to develop the female character Black Jade who is far too independent and outspoken to fit into traditional Chinese culture and whose evolution is followed not only in Tienkuo the Heavenly Kingdom but the sequel Beyond the Heavenly Kingdom.

What is your favorite scene from the book?

Probably the chapter in Nanjing as the imperial forces from Beijing destroy the once glorious capital of the Christianized Heavenly Kingdom.

Readers say they got really caught up in the sights, the culture, and the experiences. How did you pull this off?

It is hard to speak for readers but my impression is that many have been caught up in the combination of the very authentic historical events and fictionalized real people with the fictional but very complicated characters I built the story around. That was especially apparent when recently the hundred-year old relative of one of the genuinely historical characters I had fictionalized wrote me to say how much she appreciated my fictionalized version of her long dead relative.

This is Book 1 from the Sino-American Tales series. Can it be read as a standalone? How do the other books in the series tie in with this one?

Tienkuo is of course the first volume and very much a stand-alone effort though that is largely true of the sequel, Beyond the Heavenly Kingdom which follows the same characters though their adventures in America and Europe and the Middle East during the following decade.

Most of my day is spent as a professor of history-- teaching and writing but of course confined to what the historical record has revealed, while in my spare time I allow my imagination to flow with that same material and thus was born the Sino-American Tales and specifically Tienkuo the Heavenly Kingdom.

These days I am deeply caught up in writing the third volume of the series, a tale that follows the same family and is set both in China and the United States of the late 19th century.