Susan-Alia Terry - Writing About the Devil we Don't Know

Susan-Alia Terry - Writing About the Devil we Don't Know
Posted on 5th of July, 2017 by Naomi Bolton 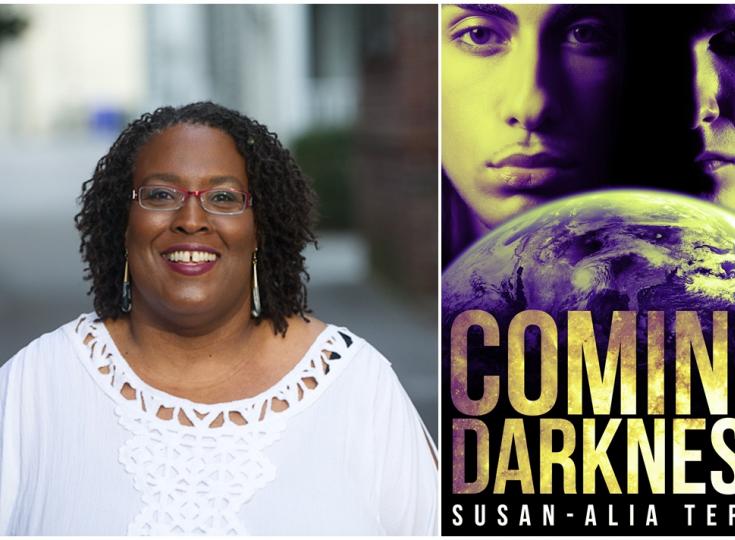 Susan-Alia Terry's writing is compelled by the desire to entertain herself and her readers. In her paranormal fantasy, Coming Darkness, Terry writes an unusual story in which Lucifer is not entirely the bad guy, but a character that could love and be loved. As our Author of the Day, Terry tells us all about the inspiration behind this book, how she created her characters and her life as a writer.

Please give us a short introduction to what Coming Darkness is about.

Self-exiled Archangel Lucifer has lived in a pleasant bubble of spoiled excess with his lover Kai for centuries. When the other Archangels come to him with a problem — Heaven is gone and their Father is missing — he refuses to get involved because not only is it not his problem, but it's probably some elaborate ruse they've cooked up to lure him back into the fold. When he's personally attacked, he finds that he's wrong on both counts. There are other powerful gods at work, gods who believe the current creation is flawed and must be destroyed.

Kai is caught flat-footed when Lucifer disappears. Off balance, he reacts without thinking and his life begins to spiral out of control. In the past, he never cared that he was looked down upon and called Lucifer's pet. But with Lucifer gone, he's left navigating a world that does not respect him. Since the only true currency is respect, he must gain theirs the only way they'll understand, through blood.

What inspired you to write a story about a different Lucifer than we know?

It was actually a happy accident. Coming Darkness was born out of my first (and only) attempt to write a paranormal romance. The romance was between Kai & Roberta while Kai was on a break from his lover. I don’t know why, but my brain decided it would be cool if Kai’s lover was Lucifer.

When I scrapped the original story, I kept those three characters because they intrigued me. As the concept for Coming Darkness evolved, it was clear that Lucifer could not be the devil we know unless I wanted to write the paranormal equivalent of Natural Born Killers —which I didn’t. I had a solid idea of who Kai was and there was no way that he would either meet, or come to love, the Lucifer of current lore. So, who was Lucifer outside of the lore? The challenge was to take his core aspects — his essence as an Archangel, his prideful nature, his hatred of humans — and build a character that could love and be loved.

Then came the fun part! If Lucifer isn’t the bad guy, then who or what is?

You only started writing once you were in your late 40s. Why did you wait this long?

The simple answer, I suppose, is that I never thought of myself as a writer. Writers wrote — constantly — and from a very young age. I never did that. I read, and I made up stories in my head. I was making up fan fiction decades before I knew that it was an actual thing. Writers wrote, I daydreamed.

I wrote a few poems in college, documented the occasional dream, had the occasional thought about “putting something together”, but nothing ever went anywhere. I had an idea about what a writer looked like, and it just wasn’t me.

I think it took a Holy shit, I’m gonna be FIFTY soon! moment for me to get serious about finding what it was I wanted to spend the other half of my life doing. That re-evaluation allowed me to relax the image I had of who I was and what I was capable of, it allowed me to explore. Once I loosened up and gave it a shot, I found my voice!

Tell us more about Kai, Lucifer's lover. What makes him tick?

Kai was raised by his Master in a warrior’s tradition. He spent the first 200 years of his life as a vampire living with his Master and following a code that gave him a solid sense of honor, duty, and stewardship. He gets an enormous amount of satisfaction out of the fact that he can control himself. He’s not a wanton killer; he’s thoughtful and cares about the consequences of his actions. He won’t run from a fight, even if he probably should.

How do you think you’ve evolved creatively as an author since you published your very first book?

I’m not sure. I’ll probably be able to tell more definitively when the next book in my hands. But personally, I feel more relaxed about the process. Now I pretty much know what to expect and while there are expectations, they’re different. I’m much less uptight about the whole thing.

I was a licensed Massage Therapist. I threw pots on a wheel, and even sold a few pieces. I love to play video games — when I want to take out some aggression I whack on things or blow things up in World of Warcraft or Diablo, or Neverwinter or whatever game has my attention at the moment.

The lag time between thinking and typing!

How did you conceive of the unique way Coming Darkness was told?

I like books told with multiple points of view. It’s like life. An Event happens and it may impact your life directly and others indirectly. The effects of the Event show up differently for different people. To me it’s a fuller, and deeper experience.

I don't have an actual 'go-to' spot for inspiration. My mind works in tangents that are usually triggered by something I've seen or heard. Ideas come, usually at the most inconvenient times — driving, in the shower, brushing my teeth...

When I was younger and new to self-introspection, I believe writing — journaling, actually — helped me achieve clarity. But at some point, I moved past using it as a vehicle. I guess I got bored. But I’ve noticed that the bursts in clarity now happen when I’m writing creatively. It’s part of the joy.

Among the wealth of characters in Coming Darkness, who was the most difficult to create?

Initially, I had an issue with Michael, Raphael, and Gabriel sounding alike. In my head, they sounded alike because they were all “towing the party line” so to speak, and they weren't really actualized – not like Lucifer. But the problem was, I couldn't have three characters that sounded alike, when one would do. So the challenge was to drop hints about who they were but keep them buttoned up.

The Kazat were also challenging. When I discovered they had no gender, I realized that their language would not be gender specific. Since our language is not gender-neutral, writing in their point of view was both enlightening and frustrating.

I'd love to have a thing, like the sharpened pencils in The Dark Half! Something cool and quirky. But my thing is boring — I prefer to work in silence. Just give me a quiet room and I'm good.

I also like to edit as I go along. I know most writers leave it til the end — which I did for most of Coming Darkness — but I found doing it that way was stressful and overwhelming. I like doing the heavy lifting as I go.

On an average writing day, I write for 4-5 hours. Any more than that and I get tired and unfocused.

The next book in the Coming Darkness series, where all questions will be answered – well, mostly :-)!