Tavi Taylor Black - Intriguing Look at Lives On And Off The Road
Posted on 22nd of November, 2021 by Naomi Bolton 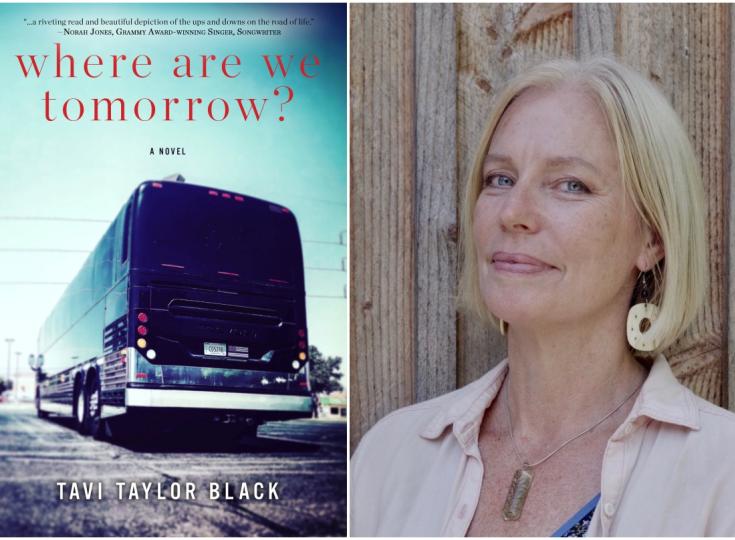 Tavi Taylor Black earned an MFA in creative writing from Lesley University in Cambridge where she worked with such skilled writers as A.J. Verdelle and Tony Eprile. Along with writer Christine Junge, Tavi co-hosts The Personal Element, a podcast about personal essays. Tavi’s debut novel Where Are We Tomorrow? was a finalist in the 2021 Next Generation Indie Book Awards, the 2021 NYC Big Book Award, the 2021 American Fiction Awards, the 1st place winner of the 2016 PNWA Mainstream Fiction Contest and a finalist in the Nicholas Schaffner Award for Music in Literature. She has an upcoming historical novel scheduled for publication with TouchPoint Press in 2022. Tavi currently lives on Vashon Island where she is finishing up a middle-grade fantasy novel. As our Author of The Day, she tells us all about her book, Where Are We Tomorrow.

Please give us a short introduction to what Where Are We Tomorrow is about.

The book is about four women working backstage on a rock tour, each coming to terms with what it means to be a woman in a male-dominated industry. Each of the women have their own particular way of being female in this misogynistic environment. All four women have their own trauma they are dealing with; Alex, the 36-year-old protagonist, becomes accidentally pregnant and then miscarries. She is surprised by her own longing for family and home and must decide if she is willing to change her career and her relationship as her boyfriend, ten years her senior, isn’t ready to become a father again. Lily, the pop star’s personal assistant, is treated like a slave; she breaks down as the memory of a sexual assault surfaces. Each of the four women has their own story of discovery. When the tour is on break, they rent a house together in Tuscany and help each other to face tough decisions ahead.

What inspired you to write about four women working backstage on a rock tour?

Touring was my main career throughout my adulthood. I actually didn’t want to write about touring because I was so tired of living that life. I wrote several other books (or pieces of books) first. But when I became pregnant and stopped touring—when I had some distance from that life—the stories started forming. These women were all based on real women I knew on a particular tour—they are, of course, fictionalized, but I was inspired by these incredible women. It was such a rare thing to have so many women on a tour together. I was often the only woman on a crew of thirty or forty. Though the characters in the book are based on real women, they definitely took on lives of their own. The storylines are completely fictional, though there is a basis of truth in many of the scenes. For example, I mention at one point a stagehand pointing Alex to the kitchen when she arrives in the arena in the morning. That used to happen to me all the time. I was the electrician on the tour, but it was assumed I was the caterer because I was a woman.

How did you manage to get a review for this book from Norah Jones?

The tour I mentioned above where there were so many women was the Norah Jones Feels Like Home tour way back in the early 2000s. Norah was kind enough to read the book and give me a blurb. She is, as you might expect, incredibly sweet and nothing at all like the pop star Sadie in my book. Norah is as funny and kind as they come. I’ve never met a star who was so down to earth; she’s pretty much the opposite of Sadie. It was a huge honor (and a relief) that she actually liked the book.

This was your debut novel - what has the experience been like so far?

It is definitely incredible to reach publication after so many years. Sheri, Ashley, and Kimberly at TouchPoint Press have been so supportive and kind throughout the process. What a gift that they saw promise in my manuscript. To reach a life goal is humbling and rewarding. But of course, it’s not all roses. I had basically no “platform” when I headed towards publication. I was not on social media. So, I’ve spent the last couple of years learning about marketing, writing less than I want to. I feel like I’ve gone back to school for a new career. As we all know, writers aren’t just writers these days. We are marketers.

I have a lot of things I’m pretty good at, if not super-skilled. I like to think that’s why it took me so long to publish my first book (10 years on Where Are We Tomorrow). I was a painter and a dancer long before I was a writer. I thought I’d be a professional set designer, but then my career took me more into lighting and then into tour management. But I still paint sets for my daughter’s ballet, so I keep my hand in it. I taught ballroom dance for years (pre-touring days). And I was in a few bands, though I was never a very good musician. I can hold my own in the kitchen too. If I had more time, I’d love to bake specialty cakes.

I feel like Alex (the main character) was challenging because she is most like me. I attempted to base her on another woman I had toured with in the past (Sharon Huizinga, an excellent lighting designer.) In my mind, Alex looks like her, but as the story grew and morphed, Alex acted more and more like me. I suppose that was unavoidable. Most of the characters end up having pieces of my personality or my ideas in one way or another.

Readers say the book was really emotional at times - was this intentional?

Definitely. To me, the best books are the ones that make you feel emotion. As I’m reading, I want to think “God, no, don’t let that happen” and then have it happen. If I’ve affected readers in that way, I’ve done my job. I suppose some people pick up this book thinking it might be a fun beach read, and I do think the novel has some of that light-hearted ensemble feel, but what I’m really interested in is delving into human trauma. I want to look intensely at pain and then offer up some hope.

Tell us more about Alex Evans. What makes her tick?

Alex has spent so much time building up walls, trying to look tough, that she has a really hard time allowing herself to be feminine. It’s difficult in the touring business because, to her mind, feminine equals weak. Any sign of weakness in that culture will be pounced upon. For example, a tour might start loading into a venue at 7 or 8am, finishing at 2am, but you are made fun of if you take a nap mid-day (as I usually did when I was starting out in the business. Sleep is seen as a detriment, which, of course, is ridiculous. I think Arianna Huffington wrote a book about such cultures.

So, Alex has a lot of habits and midsets to break through. When the women take the journey to Tuscany, with the help of her childhood friend, Alex remembers who she really is. She learns to let down some of those walls and be her authentic self.

Oh, yes, absolutely. I’m actually not much of a planner at all. I like to see where the characters want to go. My favorite thing in the whole writing process is when I read back over a scene after a break and think, “I wrote that? Wow. Cool.” Sometimes I’ll have no memory at all of writing a paragraph or even a page. That’s the magic. It’s not always like that, of course. Sometimes it’s painful.

The scenes are very descriptive. How did you pull this off?

First of all, thank you for saying so. My love is for story and character, but above all I strive for beauty in language. For beauty in general, really. I want to dig down into the heart of what I’m seeing and feeling, and if it’s something that I haven’t experienced myself (say, having thousands of people cheering for me,) then I put myself in a state of trying to imagine I am that person and transcribe what I am seeing and feeling.

Sadie was absolutely the most fun to write. We all love to hate characters like her. I tend to love revision more than drafting, so it was fun to make her awful but then to find something redeeming about her.

I have to say, though, the most fun that I had post-writing was getting the reaction of the real-life women who the characters are based on. One in particular—Kim Karston Bush, who the Lily character is based on—had such a great reaction when I sent her the book. She truly loved it, loved what I did with her character. We hadn’t really talked in a decade and we reconnected through a Zoom call after she read it. We laughed for an hour. All of the women have been a delight. She and the Brooke character (the actress Mia Adams) even joined me on a live stream to talk about the book with Powher Books. That was super fun.

Not really. I try to write whenever I can, wherever I can. I used to write at 5:30am with a strong cup of coffee, not by choice, but because that was the only time I could make sure I would be alone. But now I have a middleschooler that has to be at the bus stop at 7 so that sort of blows my early-morning alone time. So now it’s more like 7:30 since she’s back in school. During the homeschooling months, it was all over the map.

I am revising a middle grade fantasy novel that I worked on with my daughter during the pandemic. It’s been such a fun project. It’s about the Wishingworld, where only boys are wizards. Girls are typically witches who do healing spells. 12-year-old Ailey Windsong is about to change all that—she’s been secretly practicing her wizard skills for years. When her twin brother is chosen to go to the human world to dissolve a cloud of pollution that has blocked the yearly bringing of the light, Ailey knows she must follow him through the portal. Ivan is a terrible wizard.

I also have a historical fiction that will be coming out sometime late next year with TouchPoint, so I’ll be working on that with my editor soon.