Terez Rose - Ballet, Passion and Africa
Posted on 29th of May, 2020 by Naomi Bolton 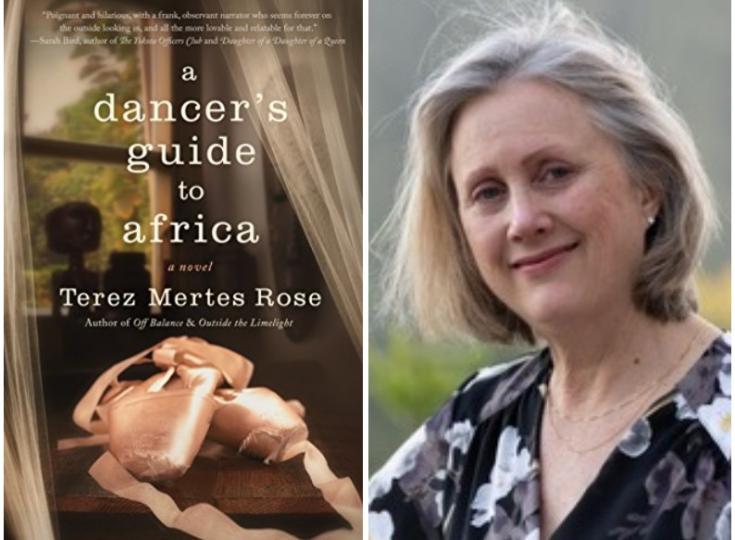 Terez Rose (who also publishes as Terez Mertes Rose) is the author of Off Balance and Outside the Limelight (Classical Girl Press, 2015, 2016). Her stories and essays have appeared in Crab Orchard Review, Literary Mama, Espresso Fiction, The Philadelphia Inquirer and the Milwaukee Journal-Sentinel. Anthology credits include Women Who Eat (Seal Press, November 2003), A Woman’s Europe (Travelers’ Tales, June 2004) and Italy, a Love Story (Seal Press, June 2005). She reviews ballet performances for Bachtrack.com and blogs about ballet, classical music and the violin at The Classical Girl (http://www.theclassicalgirl.com). As our Author of the Day, she tells us all about her book, A Dancer's Guide to Africa.

Please give us a short introduction to what A Dancer's Guide to Africa is about?

Ballet dancer Fiona heads off to Africa, post-college graduation, to escape family conflicts back home, and gets thrust into a world rife with all sorts of conflict and discomfort, including a devastating infatuation with a charismatic African man, all of which is going to force Fiona to finally grow up and find herself. Oh, and find a different, mysterious outlet for her need to dance.

Was there anything in particular that inspired this book, that made you want to tackle this?

I had my own Peace Corps experience that I began chronicling, years back, as a narrative nonfiction book. I couldn’t get excited about the project, even though I knew I had rich material about the culture, the country of Gabon, the immersive experience I had. It was coming out on the page so dull and uninspiring. So I made up a character, this sexy African guy from a wealthy, privileged family, with whom Fiona immediately clashes. The story exploded, into a love affair, but much more. It whispered into my ear and it was all I could do to keep up with the typing. It was crazy. I was in a trance of sorts, under the spell of the muse and sleep deprivation. I completed the first draft, 100,000 words, in twelve weeks. 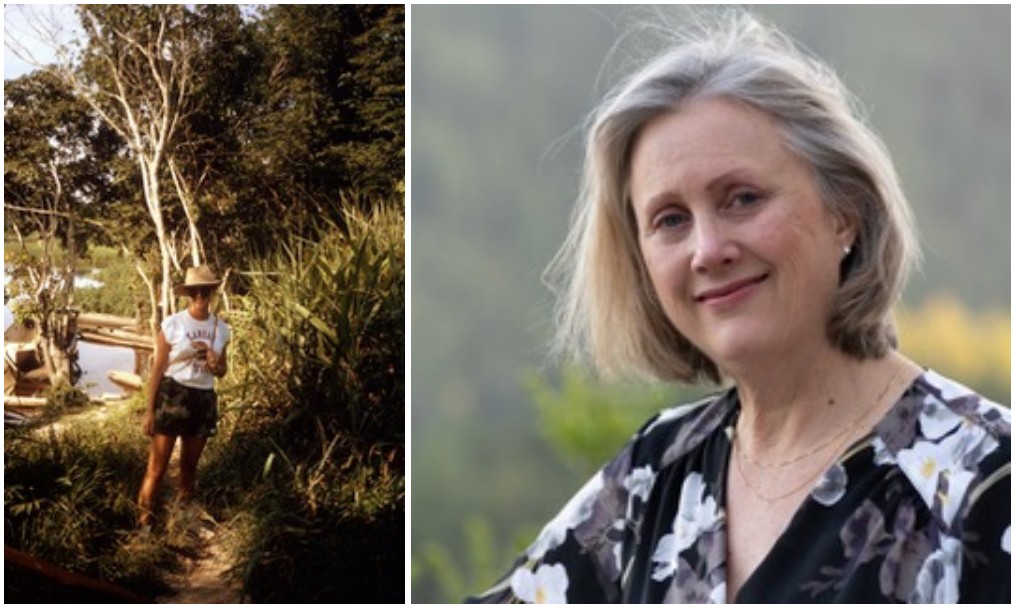 Tell us more about Fiona Garvey.  What makes her tick?

Fiona is passionate, principled and theatrical. She loves ballet, but gave it up to join the Peace Corps. It’s a connection to her stateside world that she tries to cling to, through her two-year service, until it’s clear ballet doesn’t work in her new world. But she’s stubborn, much in the way she won’t forgive her sister for a betrayal, and she won’t acclimate in the classroom where she teaches high school students English “her” way, and not the way that works best for Africa. So she finds herself in trouble a lot. I didn’t try to make her rational-minded. I wanted her to be all explosive emotion and new feelings over Christophe, the African man she can’t forget. Her stubbornness gets her into all sorts of binds. She is not a boring character. Some readers won’t like her. But many more will keenly identify with the way she falls in love so wholly, without a safety net. Ah, youth!

Why did you pick Gabon as the backdrop for this story?

It was the country I was posted in, and I have a pretty unique perspective of the people, the regions, the food, the topography, the religion and cultural values. It was such a comfortable place to write about, which is ironic, because my two years there was not a comfortable experience!

Where does your fascination with dancing and ballet come from?

I’ve loved ballet and classical music since I was a kid. They are, and will continue to be, an eternal part of me. During my college years, I danced with a small ballet company, which was a delight, a privilege, an adventure. Like my character, I left ballet behind to join the Peace Corps out of college. Unlike Fiona, I kept it up the entire time, twice-weekly, in my tiny living room, using a kitchen chair as a barre.

Tell us more about the cover, and how it came about.

I use James T. Egan at Bookfly Design and he is incredible. He’d already created the cover art for my first two books, Off Balance and Outside the Limelight. For this one, I wanted something that fit the Africa mood, but let my readers know there was still a strong ballet and dance angle to the story.

Ha, yes! And other times, they are dull and cardboard cut-out until I do something different, like change their name or their line of work. And voila, they come to life under this new persona. If they grow even more vivid, I’ll revise the story to allow them to have a bigger part. And of course, the reverse is true, where, regrettably, I will murder an underperforming character. I hear their screams as I press “delete,” so I make a promise to them that I will consider them for future projects. One time I pulled the plug on an entire completed novel, but took one of the three main characters and inserted her into the next book. She, and the story, both thrived there.

I catch little bits of dialogue and conflict that won’t leave my mind. That’s how it all starts, with a scene, a glimmer of an idea, and this edgy feeling inside me that won’t subside until I consign the words to paper. I catch anything that arises, no nub too small. During this period, I never go anywhere without pen and paper, because in the early phase, it’s a terrible idea to assume that “I’ll remember this when I’m officially sitting down to work.” In the early days of a project, it can be torture to sit down and make yourself type out words, any words, any story, in the hopes that something good will arise. Often it doesn’t. Over half the time, I know what I’m typing out is junk that I will delete. That’s fine; I know my process now. Most of the early good stuff comes after I’ve left my desk for the day. It’s all about catching these dust motes of gold that fill my afternoons.

How does A Dancer's Guide to Africa tie in with your other books?

Fiona gets letters from her childhood friend, April, through the story. April “made it big” as a professional ballet dancer, leaving Omaha for New York to train as a teen. I don’t want to give away the ending of A Dancer’s Guide to Africa, but I can say that April is the narrator in the forthcoming Ballet Orphans, Book 3 of the Ballet Theatre Chronicles, and she and Fiona connect and get to be roommates in a new, different city for them both. I’ve had a lot of fun, connecting the series with the Africa novel.

I work best in the mornings, so I get up at 4:20am, make myself a cup of tea and, paradoxically, plop myself down on my zafu for 20 minutes of mindfulness meditation, where I strive to drop all thoughts in my mind. Sounds rather counterproductive, right? Years back, I decided just that, and dumped the meditation practice so I could get to work sooner. Well, that turned out not to be the answer either. After a 10 year absence, I returned morning meditation to my routine. Good call. It’s clear to me now that, far from distracting me from my writing, it calms my mind and allows me to tackle my work from a more settled place. On an average day, I’ll work until the other members of my family arise, take time off for breakfast, a morning walk, but always returning to my work until 2pm or thereabouts. After that, the brain calls it quits for the day, although I will always print out a scene or a chapter that’s causing me problems, and carry it around with me. Solutions tend to arise during this “not really working” time. I also use the afternoon hours to get in some reading. I am always reading two or three books concurrently. So many books, so little time!

Book 3 of the Ballet Theatre Chronicles, Ballet Orphans, a prequel that is set in 1990, but features several of the main characters from Off Balance and Outside the Limelight. It’s been a lot of fun writing from the perspective of twenty years earlier. Readers of the other two books of the series will love seeing familiar faces in younger roles, and readers of A Dancer’s Guide to Africa will love the way that novel rolls right into this one, as Fiona’s adventures continue, albeit as a supporting character.

My reviews and articles and sample chapters can be found on my website, http://www.terezrose.com, but for a more interactive experience, readers should visit me at my blog, The Classical Girl. http://www.theclassicalgirl.com. I love getting visitors there and it’s so much fun to engage in conversation about the articles, of which there are well over 200. There’s a Ballet Q&A page, an “Africa” page that serves as a landing place for readers of Dancer’s Guide to Africa who want to know more about Gabon. There’s a plethora of informative articles, about what ballet dancers eat, 10 odd facts about pointe shoes, another about the world of ballet tutus, how to take a ballet class in Paris, and seven years’ worth of ballet reviews. Readers can send me an email both through this site and my author website. My Facebook page is https://www.facebook.com/TheClassicalGirl?ref=br_rs and my Twitter handle is @classicalgrrl.