Terry Lynn Thomas - An Absorbing Thriller Written in a Literary Style
Posted on 18th of September, 2019 by Naomi Bolton 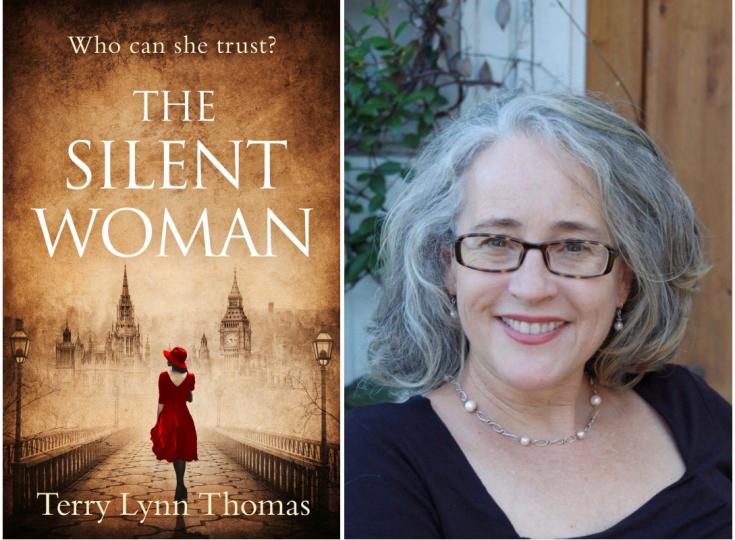 Terry Lynn writes the Sarah Bennett Mysteries, set on the California coast during the 1940s, which feature a misunderstood medium in love with a spy. The Drowned Woman is a recipient of the IndieBRAG Medallion. She also writes the Cat Carlisle Mysteries, set in Britain during World War II. The first book in this series, The Silent Woman, came out in April 2018 and has since become a USA TODAY bestseller. As our Author of the Day, she tells us all about this.

Please give us a short introduction to what The Silent Woman is about.

The Silent Woman is the first book in the Cat Carlisle Series, which takes place in 1937. Cat is stuck in an abusive relationship with a husband who gives her very little money. Over the years, Cat has become friends Reginald, an old man she met at the park near her house. Reginald relies on a cane to move around, is his highly intelligent, and is sympathetic towards Cat’s situation and her desire to leave her marriage. When Reginald asks Cat to run errands for him in exchange for money, she readily agrees, thinking this could be the much-needed opportunity to escape her abusive husband. Eventually, Reginald comes clean with Cat and explains the sensitive nature of the documents she is transporting. When he tells Cat her husband or someone in her household is suspected of trafficking classified documents into the hands of German agents, Cat reluctantly agrees to switch the documents in an effort to catch the spy.

Tell us more about Catherine Carlisle.  What makes her tick?

Cat is an intelligent woman whose parents were killed when she was a young girl. After her parent’s death, Cat moved to London with her Bohemian Aunt Lydia, a famous artist whose paintings are in demand. During this era, a woman’s place was in the home tending to family, and rigid class distinctions were in play. (Cat, of course, found this smothering.) Her husband, Benton Carlisle, came from a wealthy and influential family. In addition, he was a talented industrial engineer whose firm was working on plans for airplanes and other weapons of war. Marrying Benton automatically put a mountain of responsibility on Cat’s shoulders. She was expected to entertain clients, keep the house, and follow a very strict order of conduct, a lifestyle which was completely opposite from life with her artistic aunt. To make matters worse, she had to contend with Benton’s sister, who tried to run the house as though she were its mistress. At first, Cat enjoyed her life with Benton, enjoyed the freedom to buy expensive clothes and the security of her husband’s wealth. She even managed to get along with Isobel, her sister-in-law, and helped with the vast charitable functions which were Isobel’s passion. But years went by and tension between Isobel and Cat grew. When Cat continually miscarried (she lost four babies), Benton blamed her for lack of an heir and quickly took a mistress. Left alone at the Carlisle home with Isobel for company, Cat’s situation became unbearable. She wanted out. As the book unfolded and Cat fought for her freedom, I specifically developed her character with a well-honed sense of justice, which was easily illuminated among the social ethos and class distinctions of the time.

Why did you pick the period just before WW2 as the backdrop for your book?

The events leading up to World War 2 fascinate me, especially because the newspapers weren’t reporting Hitler’s activities, namely building planes and conscripting an army in violation of the Treaty of Versailles. My research led me to the national archives where I discovered cabinet meetings as early as 1934 discussing the “German problem” and Hitler. While I understand complete transparency in governments is difficult when it becomes a security issue, I was surprised this information was kept out of the papers.

As the Cat Carlisle books move forward (The Family Secret, Book 2, takes place in 1940, the third book takes place in 1941), I am amazed at the sacrifices people made during this time, especially in the UK. The bonhomie and unified spirit of the people of Britain is the common thread which shines through in the newspapers, diaries, and other sources I drew upon. The strength of the nation and Churchill’s leadership inspire me. The world changed after World War 2 in such a significant way, I quickly realized the events which took us to war were just as important as the war itself. Finally, I really enjoy writing about a cell phone-free era where people aren’t so plugged in all the time.

How much research did this book take from you to make the history part of it ring true?

This is such a good question. Although I do love history, I don’t claim to be a historian. Historians document the past – if they’re good at their job – with unbiased objectivity so we may understand the way certain situations unfolded and how they influence us now. As a historical novelist, I aim to give my readers a sense of what it felt like to live during the time in which my novels are set. Research is my favorite part of writing. I draw on newspapers, magazines, diaries, novels of the era, and movies to get a sense of day-to-day life during the time in which my book is set. The trick of good research is to sprinkle it into the story with a light hand. I don’t want to turn off my readers with an info dump or a bunch of dry facts that don’t move the story forward.

The greatest challenge was committing to a different viewpoint for The Silent Woman, which is my fourth published book. The Sarah Bennett Mysteries, which I wrote prior to the Cat Carlisle books, are written in the first person. When I wrote the Cat books, I wanted to stretch and push myself to do something different, so I wrote the books in the third person. I had no idea how much I would enjoy it. The ability to have more than one viewpoint character really enriched the writing experience and allowed me to develop the characters and have them play off each other.

It’s so hard to pick out one line, but I’ve pasted in a short excerpt that really resonates with me and speaks to Cat’s character arc as she starts to question those around her and struggle to understand exactly what her husband was up to. In this scene, she’s scheduled to meet Reginald to discuss switching documents, but Reginald doesn’t show for the meeting and Cat is left to deal with a new contact.

‘We have a problem.’ The woman spoke in a light tone. Anyone who passed by would think that she and Cat were discussing the mundane topics favoured by housewives all across England. She opened a fashion magazine and scooted close to Cat. As she spoke, she smiled and nodded, while pointing at an advertisement for rayon frocks. ‘Your husband is going to bring home an extremely important document tonight. You need to do another switch for us.’
‘Switch it when he’s home?’

‘Smile and act natural, Mrs. Carlisle. Always assume you’re being watched. This is important.’
Cat slowed her breath. She sat back on the bench and crossed her legs. ‘May I?’ She pointed to the fashion magazine. When the woman handed it to Cat, she flipped through the pages and held the magazine open at a full-page colour ad for women’s shoes. ‘I rather like these shoes,’ she said. ‘But yours are much finer. Where did you get them?’

She met the woman’s eyes and didn’t look away. The two women sized each other up. Reginald’s minion, with her fine clothes and independent confidence, and Cat, a sophisticated socialite, who had the means to open doors this woman would never have access to, no matter how fine her clothes.
‘Do you have a husband?’ Cat asked.

The question caught the woman off guard. She hesitated and stumbled over her words.
‘I didn’t think so,’ Cat said. ‘I’m well aware of how important this is. I’m the one taking the risks here. I’m assuming you have a plan for me to switch the documents when everyone is home. If you’d be so kind as to tell me what that plan is, I’ll be on my way.’

Hope and the redemptive power of love. In my books, it’s a subtle thing, but it’s there.

I plot out my entire books, often spending just as much time thinking about and tweaking the outline as I do writing the novel. Of course, I often change course midway, but my outline provides me a map to guide me once I get underway with my story. I like to think of it as doing all my left-brain work at the outset. This includes character sketches, notes on scenes – I am a visual writer and have pictures of every room or a physical location in the books – research about the weather and the phase of the moon during the time of my story, and a detailed chapter outline. I know what’s going to happen when I sit down to write, so I can focus on the story and the words.

I like to write in the morning and have been known to get up as early as 4:00 a.m. to get my word count completed. (I try to write 2,000 words a day, Monday through Friday.) I’ve tweaked my routine into three fifty-minute sessions. Between each session, I take a walk or do a bit of yoga, but I have a hard and fast rule to stay off social media until my pages are finished for the day. This keeps me in the story and unplugged from distractions. I write on a laptop, which I have rigged up with an ergonomic keyboard. Sometimes I’ll write on the couch with my dogs around me. I confess to have a passion for fountain pens and love to use them when I hand edit manuscripts.

Right now I’m working on structural edits for the third Cat Carlisle book, The Silent Sister. After that, I’m going to turn my attention to a new mystery series which features an older protagonist, set in modern times. I do plan on coming back and writing more Cat Carlisle books, probably in the form of novellas.

You can find me on the web at terrylynnthomas.com.

Where can readers get a copy of The Silent Woman?

The Silent Woman and the Family Secret are available on all platforms, including Audible for those who are interested.