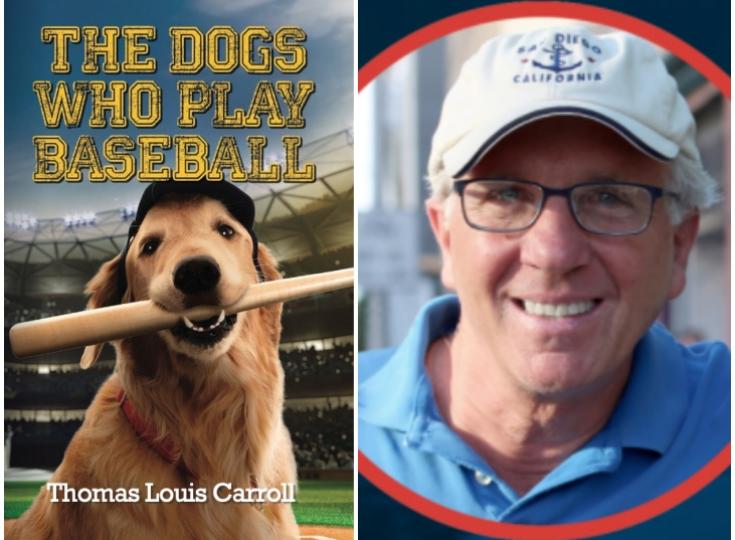 Thomas Louis Carroll is the author of "The Dogs Who Play Baseball," the story of dogs who learn to play baseball, and "The Colony," the story of a boy who gets reduced to the size of an ant and must survive on the desert floor. He lives in Santa Fe, New Mexico, with his wife, a remarkable special needs teacher, and his dog Mazey. He has three amazing daughters. He is also a director of movies, including "Big Bad Budget" and "Who Stole the Tasmanian Devils?" He loves to go windsurfing, swim, and go dogsledding, which he does in Northern Minnesota most years.

Please give us a short introduction to what The Dogs Who Play Baseball is about.

The Dogs Who Play Baseball is the story about a bunch of kids in the Bronx who teach their dogs (really teach their dogs!) how to play baseball and go on to play real games, against real teams. This heartwarming story shows how amazing dogs can be and how strong is the bond between dogs and kids.

What inspired you to write about dogs who play baseball?

I had a white Labrador who showed me an amazing ability to play baseball, catching grounders, running bases, catching fly balls. He could never learn to hit, of course, but my book finds a way for dogs to do that as well. I was walking with my dog one day and throwing him the wall and realized he would make a great baseball player, if only...

Why did you pick a bunch of kids from the Bronx as your protagonists?

I grew up in New York City, so it was natural for me to pick the Bronx as the place where they came from, and as a Dodger fan (I spent summers in LA), I could think of nothing better than having the dogs play the Yankees.

My most challenging character to write was probably the manager of the dog team. He’s completely fictional, a retired Yankee, and bored after retirement, doing nothing. I wanted to bring this character to life who gets pulled into the manager job, and ends up loving it.

Besides writing, I direct films and videos. I have a PR company, Carroll Strategies, in New Mexico, and handle public relations for companies doing business here.

What did you have the most fun with when writing The Dogs Who Play Baseball?

Most fun? Clearly, the plot. For me, it harkens back to a world that was more heart-warming. I wanted to write a book that really connects with young people (and their parents) that had elements of disbelief but was somehow believable. This book has a bit of Little Rascals, in a modern setting.

Why do you write children's books? What drew you to this audience?

I write children’s books because they’re my favorite audience. This is my second, the first being “The Colony,” set in the Southwest. I like the amazing potential of writing for middle readers, who are so smart and yet receptive to other worlds.

Which of the dogs in this book is your personal favorite and why?

My personal favorite is Chester, the white Labrador. I had a Labrador and he was a great friend and a great dog. He died a few years ago and this is my way of honoring him.

The cover was designed by Laura Chambliss at Studio Yopp, a brilliant art director, in Albuquerque. She took the idea of the book and made it come to life in the cover. We wanted to show the dogs in a stadium, in uniform, with a baseball bat — because it showed the dogs actually in the playing field.

You have also written two screenplays and produced two films. In which way was writing a children's book a different experience?

I have written several screenplays and produced two films, and so when I was writing the book I used the visual medium to create great scenes in the book. Because of movies and TV, people think visually these days, so it made sense to make the children’s book a visual feast. And so it is, I hope.

I write very fast, starting early in the morning. I blaze a path, knowing I’m going to write and rewrite. Hemingway said writing is 10% inspiration and 90% perspiration, and that’s certainly true for me. If possible, I’ll write till lunch and then when my brain is used up, I’ll go exercise. It’s a great day.

Right now I’m working on the screenplay for “The Dogs Who Play Baseball.” We have every intention of making it into a movie.

Readers can find more about the book at DogsWhoPlayBaseball.com. They can also email me at [email protected].