Tiffany Pitts - Fast-Paced Comedic Adventures With Lots of Thrills and Unexpected Characters
Posted on 11th of October, 2019 by Naomi Bolton 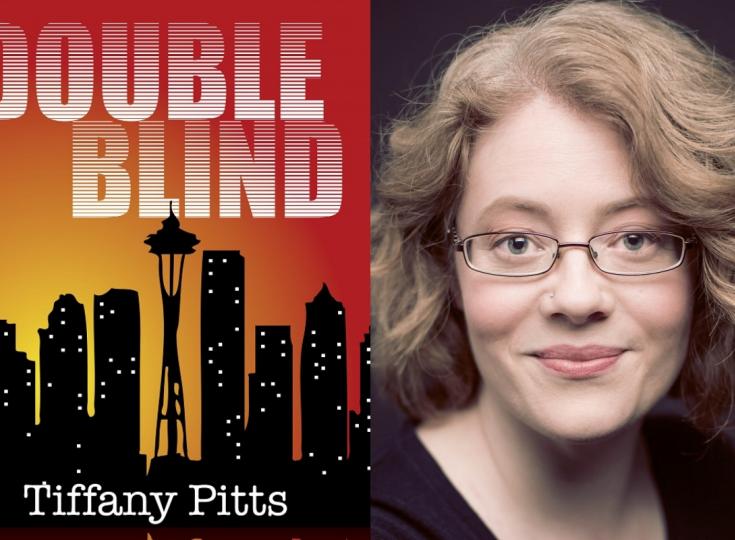 An award-winning author, Tiffany writes fast-paced, comedic adventures with lots of thrills and unexpected characters. She lives in the suburbs of Seattle with her husband, their two children and her writing partner, Thor Michaelson (a dog). Parallax, the third book in the Thanatos Rising series, is coming soon! As our Author of the Day, Tiffany tells

Please give us a short introduction to what Double Blind is about.

Delilah Pelham’s brother Paul has disappeared from a high stakes business transaction in Hong Kong with some very sensitive technology. Paul’s business partner, Dr. Carl Sanderson, is a gangly tech geek who knows much more than he’s letting on. Together they must track down Paul and keep from getting killed themselves.

Back at home, Carl’s roommate and secret business partner, Jake Denny, as been recruited to feed Deli’s cat, Toesy. Not a difficult job for a couch potato but things start to go sideways when Toesy eats a little bit of the technology everyone is being so secretive about.

What inspires you to write about a girl who leaves for Hong Kong to find her brother?

It was more about her and her cat, honestly. Toesy is and always will be one of my favorite characters to write but he’s a 32-pound Maine coon cat who doesn’t speak English (on account of being a cat). He’s got such a strong personality that he needed someone stronger to claim him as a pet. Delilah is hard-headed, non-nonsense, get-things-done type of woman who believes her brother has been up to no good and that Carl and his bad of merry geeks are heading into trouble they don’t know about. She can’t let them go on their own.

Tell us more about Deli - what makes her tick?

Deli has been the sensible one in her family for years. Her brother is a shyster who has been in trouble since the day he learned the phrase “Trust me.” She’s been bailing him out ever since - not that she wants to, she’s more compelled to than anything else. And also, her nana would be pissed and stop inviting her to Christmas if she didn’t. Partly that’s why she owns and operates a martial arts studio. When confronted with danger, her solution of choice is to kick things. With her, it’s not symbolic. She does actually beat a lot of people up.

Why do you like to write about geek love?

Honestly, I didn’t intend to. Sometimes my characters make their own choices (most of the time really). I think Carl has had a crush on Deli for some time.

This book earned several awards. What surprised you most about reader reactions to this?

How consistently surprised people are at how much fun they had reading it. People who know me say things like, “I read your book and I didn’t realize it was going to be like that. It was so much fun!” People who don’t know me leave reviews like, “I downloaded this on a whim and was totally surprised at how much fun it was!” Don’t get me wrong, I love that they are delighted. I love that people find it so entertaining! But at the same time, I run a website dedicated to dog’s political Anti-Vacuum Cleaner platform. I’m not entirely sure what else they may have expected.

Why did you decide to turn Deli's cat into an accidental superhero?

I love spending time with Toesy. I spoil him rotten. Anything he wants, I will find a way to give him. Because he’s a cat he doesn’t ever want for money or fame. He wants more catty things, like smoked salmon, thumbs, and revenge. Nine lives weren’t really enough for such a magnificent beast so I gave him a multidimensional boost (named Steve). I think it suits him well.

I make a mean whoopie pie, my dog is semi-famous on the internet and I can lip sync Sure Shot by the Beastie Boys better than anyone else in the PTA. I think should count for something.

Why did you pick Hong Kong as the backdrop for Double Blind?

I love travelling and I’m nosy by nature but my children were little when I was writing the first drafts of Double Blind. I was also the main care giver for my aunt who was going through treatment for stage 3 breast cancer so there was no time or money for actual travel. When Deli and Carl needed someplace to go, I sent them to a far-off exotic place. Hong Kong has always represented this shining jewel of a city in my mind, like you could spend years there and never see all it has to offer. It didn’t matter that I couldn’t be there in person, I spent a lot of virtual time exploring the streets of the Kowloon Peninsula. I hope to spend real, actual time there one day.

Readers report you had them in tears - from laughing. How did you pull this off?

I think that’s all Toesy. Toesy has a way of commanding any situation and shaking the jackassery out of it. He doesn’t interpret situations as life/death – more like “Which of these fools needs a lesson?” and then jumps in. Because of his unique talents, he is often able to solve problems that others can’t, simply by being himself. Also, the voice in his head (a robot named Steve) is quite entertaining.

I want to know what your journey has been as a writer. Were you that girl who was always with a book and constantly writing story ideas down?

Ha! I was not. I did not enjoy writing at all. Or at least that’s what I always told myself. Sure, I journaled and wrote little blurbs about the random characters I made up in my head, but I hated writing assignments (so, so much) and I always assumed this was true because I hated writing. I got through high school and college firmly set on getting a degree in science. I have a BS in Botany, if you can believe that.

Then one day I found out that Stephanie Meyer and I have the exact same birthday – same day, same year. I don’t know why that made me mad, but it did. I was working in cancer research at the time and I stewed it for weeks. I couldn’t even explain it properly because no one I worked with knew I wanted to write as much as I did, including myself. In the end, I realized I was mad because here we were, two women the exact same age - but she’d been writing books this whole time and I hadn’t. Up until this point, I never knew I wanted to write anything more than a blog post. But I had all these characters in my head and if Stephanie Meyer could write hers into a book, then so could I. So that’s what I did.

Not a story about me writing so much as a story about me procrastinating. Early 2016 I was dreading going through the presidential election. The last one we’d been through was so rough on everyone – people fought constantly. I didn’t know what to do but I knew we needed some levity or we were all going to go bonkers. Driving home one day I passed the sidewalk – every town has one – it’s the one with all the political signs. Anyway, I though “Wouldn’t it be funny to see one in the middle there that was totally bogus? I wonder if people would even notice.” And, of course, I couldn’t get the idea out of my head so I had to spent the next two days ignoring my writing to design fake political signs for my dog. They said things like:

THOR MICHAELSON WANTS TO KNOW: Are you going to eat that?

THOR MICHAELSON SAYS NO! TO VACUUM CLEANERS. They’re loud and the freak him out.

By the time I was done my stomach hurt I’d been laughing so hard. I knew I had to go through with the rest of my plan. I bought 20 signs and convinced my kid to help me sneak around town in the middle of the night posting them. The next day I got a call from a friend who was very confused. “Does…does Thor Michaelson have a campaign sign up by the community college?” We laughed for a very long time. Later in the week, my husband took Thor on a walk and snapped a picture of him next to the Anti-Vacuum cleaner sign. I posted it to the internet, we all got a little chuckle out of it, and I thought that was that.

Five months later: Nov. 8th 2016, 2:19pm, my phone blew up as everyone I knew tried to call me at once. Apparently, someone saw the picture of Thor and posted it to Reddit and he’d been on the front page for an hour or so. That was a crazy day. But it’s also why the Vacuum Cleaner Defense League still exists.

I don’t know if I have interesting habits or simply just persistent ones. I write every day that I can – although having a busy family life means I don’t always have the opportunity. I also run a quarterly writing retreat, called Brass Ring Writing Retreats wherein I find a fancy-schmancy house on the Olympic peninsula and a group of us (4-5 writers) meet there on Friday and write straight through till Sunday. It’s incredibly productive. Like a mini-vacation if your idea of vacation is 36 hours of uninterrupted writing time. I love it.

Currently, I am working on Parallax, the third installment in the Toesy Universe. This time Kix, the pizza delivery driver is swept up into the disappearance of her friend’s son. Toesy finds a protégé and Jake Denny comes to his senses, sort of. That manuscript is almost done though so I’m also working on doctoring a screenplay and another Vacuum Cleaner Defense League commercial for Thor Michaelson.

Where can our readers buy Double Blind, discover more of your work or interact with you?

Double Blind is available to download this month for $0.99 on Amazon, KOBO and Smashwords. Paperback versions are available through Amazon as well. You can find me on Facebook, Tiffany Pitts, Author and in the Brass Ring Writing Retreats group. I’m on Twitter @Snickerpants and Instagram at Tiffany.Pitts. You can find even more information on my website www.tiffanypitts.com and Thor Michaelson’s: www.vacuumcleanerdefenseleague.com