T.R. Slauf - A Fantastical and Truly Imaginative Work of Fiction

T.R. Slauf - A Fantastical and Truly Imaginative Work of Fiction
Posted on 3rd of August, 2021 by Naomi Bolton 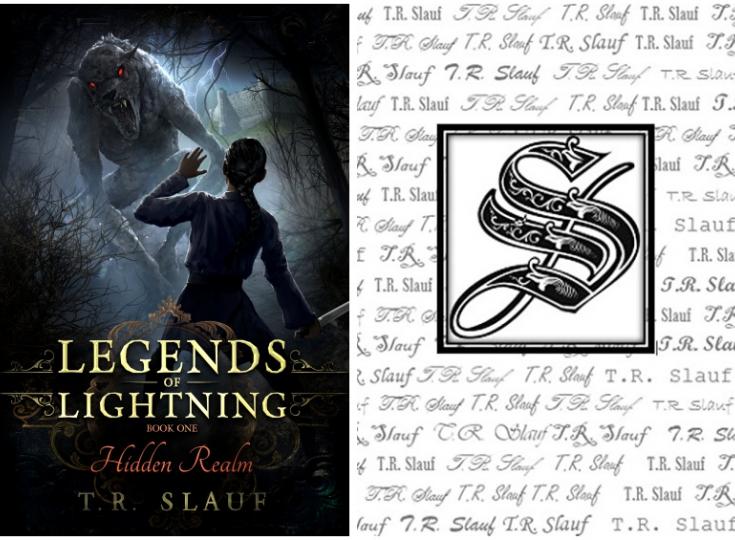 T.R. Slauf has always been torn in two; one half revels in all things scientific and longs to explore the secrets of the universe, while the other half finds solace and excitement within the arts. After not feeling satisfied working as a research scientist T.R. started working on their debut novel Legends of Lightning, Hidden Realm. As our Author of the Day, T.R. tells us all about the book and the inspiration behind it.

Please give us a short introduction to what Hidden Realm is about.

Hidden Realm is a dark fairytale with monster hunting, wizards, and all sorts of dark magical terror, but at the heart of it, it’s really a story about self-discovery. The protagonist (Esther) struggles with her identity. Esther doesn’t feel like she has a home in the non-magic realm and when she’s transported to the hidden realm, she suddenly has a new role in life. And it’s a big one. Through the novel Esther grapples with reality and constantly tries to run from who she really is.

What inspired you to write a dark fantasy with a Grimm fairytale twist?

I’ve always loved fantasy because of all the different possibilities it offers, you never know where you’re going to end up! Despite these possibilities, I always gravitated towards the dark elements of this genre. I often think about how fairy tales started and how they changed over the years. The originals were rather bloody, and we somehow got to the point where they‘re fun cartoon characters. While I still love these versions, a lot was lost in this transition.

One day I was wondering what a world would be like if all of these gruesome tales actually existed. What would the society that allowed princesses to be locked in towers and sold Belle to the beast, look like? That’s what really got this idea going.

Tell us more about Esther Wan. What makes her so special?

Esther starts out as a lonely librarian who suffers from night terrors. After waking up with wounds from her dream she finds out she isn’t who she thought she was. She’s actually a Realm Walker with great magical ability. Her coming to the Hidden Realm was foretold by prophecy, but she struggles to accept this.

When crafting Esther, I really didn’t want to follow the ‘not like other girls’ mold that seems to be very popular right now. I wanted her to be different and I wanted her to struggle with issues I personally have struggled with while also being in this fantasy element.

Esther suffers from depression and self-doubt; these turbulent emotions make her quick to anger and impulse. After being transported to the hidden realm, she gets overwhelmed and terrified by this new world. I wanted to take this character (who was never taught to be a hero and who never wanted to be one) and put them into this high-pressure, magical situation and see if it broke her.

Oh man, it’s been a roller-coaster! First of all, I’m beyond happy that I was able to finally finish a full book this time, it took me over a year to get this book written. Then came the enormous task of learning how to self-publish. I was essentially starting from ground zero, I had little to no connections and was on my own to find an editor, cover artist, build my own website, and set up my online platform.

It was not easy and it took a long time to get here, but it is so rewarding. That feeling I got when I held my first print book in my hand, there’s nothing like it. And I’ve learned so much that will help me be an even better author for books to come.

The setting is dark and ominous. How did you manage to maintain a dark atmosphere throughout?

I credit a lot of this to the overall themes of the book. Yes, we are in a land with pixies and talking birds, but we are also in a land that is brutal and unforgiving. In addition to the themes of self-discovery I mentioned above, this novel also deals a lot with addiction, mortality, and child trafficking.

These characters are faced with the absolute worst, and they need to find the will to fight for their survival. I’m basically testing the thought of ‘you either die a hero, or you live long enough to see yourself become the villain’.

Some readers say this felt like a D&D campaign. Are you a D&D fan?

Not going to lie, I was so happy when I saw this comparison!

I played a little bit in high school, and I really enjoyed it, but I haven’t played it since then. I still love the idea of D&D and I also really enjoy some of the fantasy video games on the market. (Shout out to Dragon Age)

This is Book 1 of a series. Can it be read as a standalone? How do the other books in the series tie in with this one?

Personally, as a reader, I prefer the series where the plot flows across all of the novels instead of them being stand-alone and that’s how I wrote Hidden Realm. In this first novel, Esther is really just trying to figure out who she is, and in the second one we see the impact this journey has had on her, and we see her rise to the occasion to fulfill her prophecy.

Long story short, book one ends on a cliffhanger, literally. Then book two picks right up where that leaves off.

I take my cover art very seriously, probably too seriously if I’m being honest. I wanted my cover to feel like the old covers used too, you know the cheesy ones from the eighties but with less cheese. I wanted a piece of art, not just re-arranged stock photos.

I did some sketches myself to kind of get the ideas flowing, from there I spent months looking for the perfect graphic artist. I sent emails out to a few illustrators and cover artists, and everyone was booked solid. Then finally I came across Jeff’s website. I was blown away by his art, even though it was way out of my original budget, I knew I had to make it work.

When I got on a video conference with him, I told him about the novel, its themes, and the monsters in this fairytale land. We tossed around some ideas and he did some sketches on his computer for me. We ultimately came up with what you see now, and I think it does an amazing job of portraying the terrible dangers in this fantasy.

You can check out Jeff’s amazing artwork or take one of his classes here: https://www.jeffbrowngraphics.com

What was your greatest challenge when writing Hidden Realm?

Honestly, it was just sitting down and writing, I get fidgety and am easily distracted. I knew what I wanted to happen in the novel, but just trying to sit still long enough to get it onto the paper, that was the rough part.

I found that writing my books down on paper before typing them really helps me. Handwriting helps me stay focused and it’s so much easier on my eyes. Then when I type it all up on my computer, I do edit checks and re-writes. I thought this was a relatively common practice, but some other authors have told me otherwise lol.

I also found that listening to videogame music while I write is very beneficial, the Witcher 3 soundtrack is my favorite. It helps me stay focused and gets me pumped for high-action sequences. 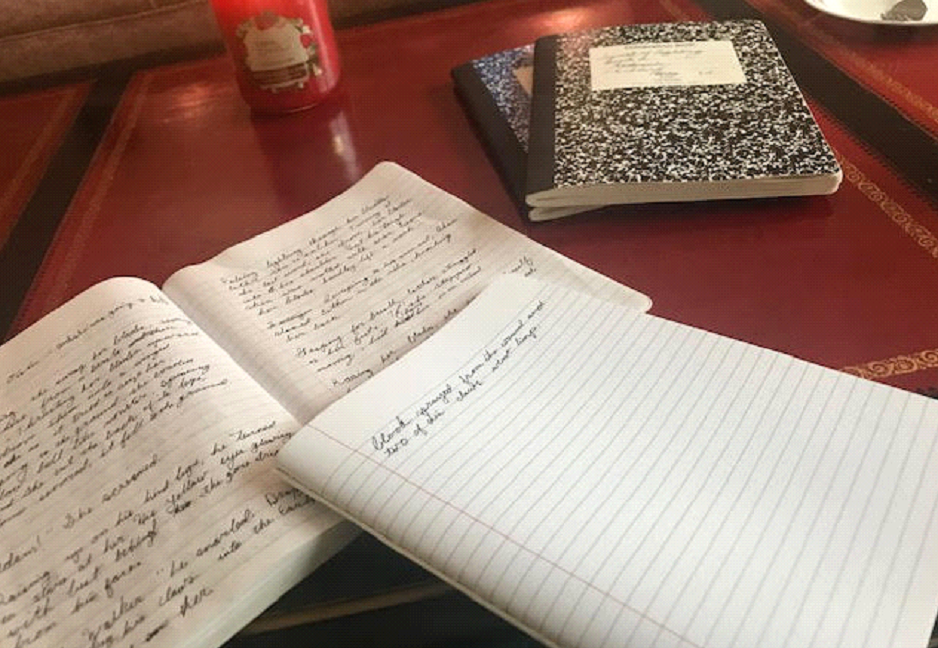 Redemption (Legends of Lighting, book two) is releasing at the end of October! So, I’m busy with the final steps in getting that ready. I’m really excited for book two, I can see how my skills as a writer have improved and I think my readers will really enjoy this next installment.

Other than that, I’m working on outlining the next Legends of Lightning book and I’m drafting an urban fantasy, The Witch, The Mage, and The Vulture. This one will be a standalone and will be quirkier than Legends of Lightning. I have a few other ideas for standalones I want to work on too, but I only have so many hands!

I have a website with my basic information and book links on it. My blog is also on this site, the blog focuses on character biographies and has some short stories on it. Outside of that, I have an Amazon author page, a Goodreads author page and I am very active on Instagram.

A lot of my inspiration comes from my dreams. I’ve always been a very vivid dreamer, and they are usually not pleasant. Sometimes the dreams would haunt me for days after, and then I started using them. Getting them out of my head and onto paper, really fleshing out what I saw, it helps me not be haunted by them as much. I think so far 4 out of 5 stories I’ve started outlining (or have written) all started out as dreams.

I usually write on an empty table with a big cup of black coffee and maybe a snack.

This is one of my favorite pictures I’ve taken of Hidden Realm. I used this for a Halloween Instagram post. This is a cover teaser for Redemption! It’s another knock out by Jeff, and the official reveal is on August 13.