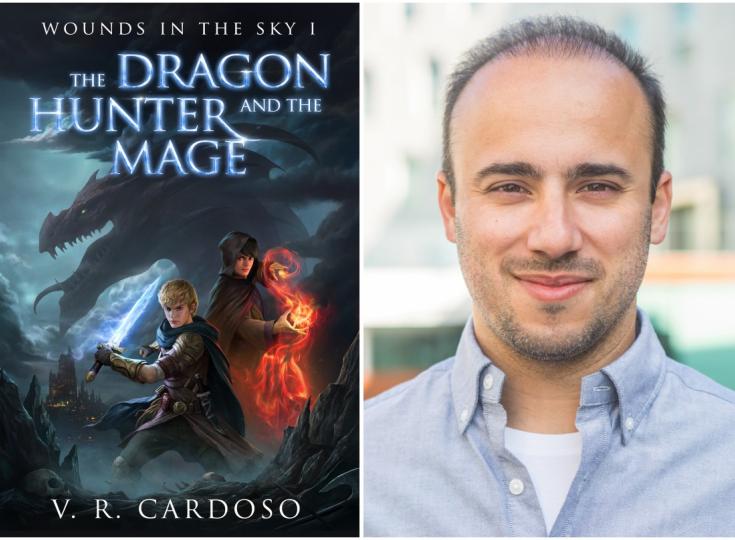 V.R. Cardoso remembers writing short stories on his dad’s old Mac SE 30. He would then print a few copies at the office so Cardoso could distribute them to his class. This was in elementary school. Cardoso claims to have mostly ripped off everything that he read or watched. He remembers having a hero that was suspiciously similar to Indiana Jones, except his name came from a book cover standing on the shelf behind the computer. Cardoso grew up on a healthy diet of fantasy novels, video games and daydreaming. After graduating in business, he spent a few years cranking out headlines, scripts and silly ideas in an advertising agency in Lisbon. Having written about pretty much everything, from laxative pills to car insurance, he decided it was time to start writing about what he truly enjoys. So Cardoso has taken the plunge and is now self-publishing his works of fiction. As our Author of the Day, he tells us all about his book, The Dragon Hunter and the Mage.

Please give us a short introduction to what The Dragon Hunter and the Mage is about.

The Dragon Hunter and the Mage is the first book in a coming of age, epic fantasy series. It’s about two half-brothers, Aric and Fadan, whose friendship stands in the middle of a vast conspiracy between politicians, evil mages, vengeful gods, and lots of dragons.

What inspired you to write about a world where magic is punishable by death?

I was always fascinated by this idea that, if magic really existed, institutionalized power would never be able to deal with it. I mean, if dictators are so scared of knowledge that they order book burnings, imagine how scared they would be of books that taught people how to do actual magic. Not to mention how scared they would be of the people who already could do magic. So I started by creating a world where the magical and political powers stood at a delicate equilibrium. And then, like a toddler, I tore the Lego tower down to the ground. That’s how the idea of the Purge came to be.

Tell us more about Aric and Fadan. What makes them so special?

They’re half-brothers forbidden from seeing each other by the Emperor (Fadan’s father). I believe what makes them special is their relationship. Aric, the older sibling, is the son of the Emperor’s most hated enemy, and so is treated like a pariah in his own home. He is forced to watch from afar as the rest of his family lives a “normal” life, while he is rarely allowed to even see his mother. Fadan, on the other hand, is taught to despise Aric. The two boys have every reason to resent each other. And yet, they are best friends and love each other. So they defy every rule imposed upon them in order to be together. Of course, they’re just a couple of kids, so this quickly gets them into trouble.

Was there ever a specific moment where you felt "now I am an author" as in "this is now my career"?

Self-publishing a book is one hell of a ride. Self-publishing as a career is a lifetime of adventures. Still, the moment of truth is when the rubber meets the road. When the first book goes live and it either sells or flops. I think all first-time authors dread this moment and I remember being terrified. The good news is, even if the book does flop, you can use that as a learning experience and do better next time, especially if you’re self-published. The bad news is, well… that this is easier said than done. Writing is a deeply personal thing, and so we writers tend to take success or failure very personally. It comes with the job. Fortunately, I can count myself lucky, because my debut, The Dragon Hunter and the Mage, was very well received. Both in terms of reviews and sales. I remember this one day, around a month after release, when the book was outselling a couple Harry Potter books on Amazon. That was the moment for me. There was no going back. I was a professional writer. Of course, book sales aren’t linear, and my books are nowhere near JK Rowling’s these days. But that’s just part of the adventure.

My superpower is eating crepes. Seriously, it’s uncanny. However, a more mundane skill I possess is cooking, although I wouldn’t consider it a secret. I advertise my culinary creations every chance I get. In fact, during self-confinement these last few months, I even created a fake take-away restaurant at my apartment. It was just for fun. A way to stay connected with friends during these weird times. The menus included everything from ramen to ceviche. I’m happy to report no one got food poisoning.

Your book has a unique magic system. How did this come about?

If you read a lot of fantasy you know that every book (or at least world) needs its own magic system. And it’s getting to a point where it feels like everything has been done. So first of all, thank you!

When I started worldbuilding Arkhemia, all I knew was that I didn’t want a hard magic system à lá Brandon Sanderson. I respect the man tremendously and I wish I could do what he does, but it’s just not for me. In this regard, I definitely lean more to the Patrick Rothfuss side of the equation. I wanted magic to be extremely difficult and dangerous to perform and so I tried to convey that to the reader by creating a system (I’m not even sure the word system applies) that was hard to wrap your head around. Like trying to describe a smell to someone who has never smelled it. I hope I have achieved it.

What is your personal favorite line from the book and why?

“Was it possible for a mother to love one son more than the other? No, surely not. But there were sons that needed more love than others, of that she had no doubt.”

Cassia is perhaps the most tragic of all my characters. She has lived a good portion of her life in an impossible situation. Not being able to care for her son Aric as much as she would like (and as much as he deserves and needs) is just one of her many torments. This line encapsulates this struggle of hers.

It would have to be Doric. Everyone needs a friend like Doric. He’d know which tavern serves the best wine, so that’s where we’d go. Then, he would dazzle everyone inside with beautiful songs and epic stories. He’d make the whole place laugh and cry in equal measure. We’d share old stories. He’d talk for hours about when he was still married to Cassia, and Aric was still a baby. I would tell him about my frequent writer’s blocks, and he’d explain just how to fix it. It would be a great night.

I plan and outline to a great degree of detail. Then, I start writing and the entire plan goes out the window. I make sure to go where my characters lead. Otherwise, the story would become lifeless and phony. The planning exists to provide guidance. Without it, I would be stuck. So my outlines are constantly changing. As I write and the story evolves, I go back and adjust the masterplan, making sure I always know where the ship is headed.

I’m currently writing the third installment of my Wounds in the Sky series, Beneath the Raining Fire.