Valerie Webster - An Intriguing Thriller Keeps You Guessing
Posted on 28th of March, 2022 by Naomi Bolton 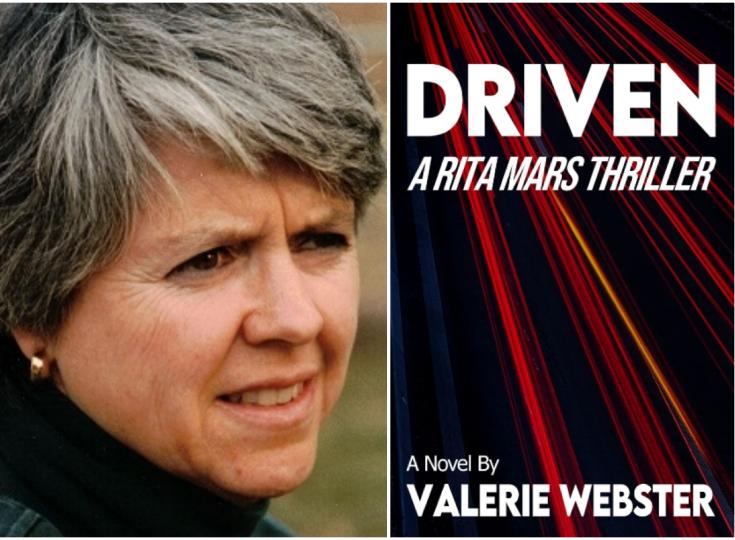 Valerie Webster has been a triathlete, a writing instructor, a crime reporter, a member of Sisters in Crime and the mentoring program of Mystery Writers of America. She is the author of DRIVEN: A RITA MARS THRILLER, wherein she incorporates her extensive career in law enforcement technologies. Valerie makes her home near Boulder, Colorado. DRIVEN is her debut thriller.  As our Author of the Day, she tells us all about her book, Driven.

Please give us a short introduction to what Driven is about.

Back stabbings inside the beltway sometimes transcend the metaphorical. Ex-investigative reporter Rita Mars loses an old friend to what local police have ruled a suicide.  She’s convinced he was murdered to save reputations in Congress.  She’s going to butt heads with the good ole boys, but she is never going to give up.

What inspired you to write about someone who loses an old friend to what appears to be suicide?

When journalists get too close to exposing corrupt government officials, their lives are in peril. The inspiration for Rita evolved from a 1970’s unsolved murder near Washington, DC with events from more recent journalist murders in Mexico and Slovakia woven in. In all the cases, colleagues took on investigating the killings as personal; they became crusades.

Tell us more about Rita Mars. What makes her tick?

Rita Mars has been an investigative reporter. She’s quick and she’s smart. She does not tolerate fools. She can be abrasive. She’s the daughter of a policeman, a Viet Nam with definitive rules. While she rebelled against the rigidity, the lessons learned prepped her perfectly for her role. As she got older, she wanted more a hand in the justice she sought as a reporter, hence her leap from writing about wrongs to having a hand in “righting” those wrongs.

You used to work as a crime reporter. How have your real-life experiences in crime reporting influenced your work?

Immediately out of grad school, I became a reporter for the Fort Smith Times-Record on the Arkansas-Oklahoma border – home of the famous “hangin’ judge” Charles Parker of the movie True Grit fame. There were several murders, including one that remains unsolved today, but the highlight of my stay there was my getting to meet and interview Sam Ervin, Senate lead on the Watergate investigations. I was hooked then on writing about the back channel manipulations of underhanded politicians.

Not so secret, but instead of going into journalism, I ended up taking a job with the local phone company in Maryland. I loved the technology and took to it as I had writing. I dug in and learned all that I could. I became a team leader for specialized projects in law enforcement and crime detection. I led a development team on electronic tracking of sex offenders. I worked with a company for many years who developed and sold lawful intercept of “wiretap” software. I teamed with a government contractor who created a first-of-its-kind voice/data network for New York City and covered all five boroughs. I spent time on the southern border investigating how best to surveil and stop illegal crossings. I saw a lot. I learned a lot.

Why did you use the halls of Congress as a backdrop in this book?

After my stint on the newspaper, I tuned my focus on things political. Congress seemed a perfect fit with my interest in the nature of the beast through my working with government contractors and state, local and federal entities. I got to see the sausage making first hand. Not always pretty, but always interesting in a dark way. With the current headlines about Congress in our time, it seemed a “ripped from the headlines” approach.

Did you plan out all of the twists and turns in the plot before you started writing, or did some of this just "happen" along the way?

Some people are concrete sequential. I am a random abstract thinker. Gotta map it out or heaven knows how the action would have meandered.

Readers say this is a real page-turner. How did you pull this off?

I studied films and books with a fast pace I loved. I stuck to the action and moved the plot.

The hardest for me were the Senate aides. I learned about fact checking every word out their mouth when I was working the technology projects. Not calling them liars, but they know how to spin.

Why a thriller? What drew you to the genre?

It’s a genre I love. I still go back and read – and watch – my faves. The favorites include: The Talented Mr. Ripley (Highsmith), Gone Girl (Flynn), In The Woods (French), Dream Girl (Lippman) – not a definitive list.

Rita experiences flashbacks - why did you create her this way?

Flashbacks enable the reader to see the making – and reinforcing – of the character traits that made her who she is. Denied but true is the fact that the father she warred with is her deepest and most important influence.

I write very early in the morning. I have a page or chapter goal in mind and I don’t get up until it’s achieved.

Right now, I’m working on a sequel to Driven entitled Objects of Desire. Rita is accused of a crime and at the same time is drawn into a complex fraud case - another work where current headlines are echoed in fiction. Objects of Desire is scheduled for fall release. I had such amazing response to Driven, I’m hoping Objects will get the same great reception.

Please visit www.valeriewebster.com. I have interesting articles about cyber safety, good reads and where to find fun and informative reader events. For those who sign up to get my newsletter, I have a monthly drawing for a $25 Amazon gift card. I also have a Facebook page. (Please “Like”) and I have a Twitter account. 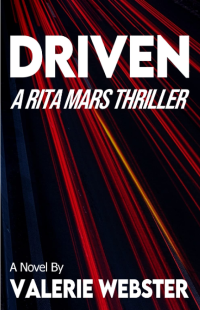 Valerie Webster
Back stabbings inside the beltway sometimes extend beyond metaphorical. Ex-investigative reporter, Rita Mars, loses an old friend to what appears to be suicide. She’s convinced he was murdered to cover unethical maneuvers in the swamp that is Congress. She’s going to butt heads with the good ole boys, but she is never going to give up.
Mystery & Thriller
$0.00
$4.99
Amazon