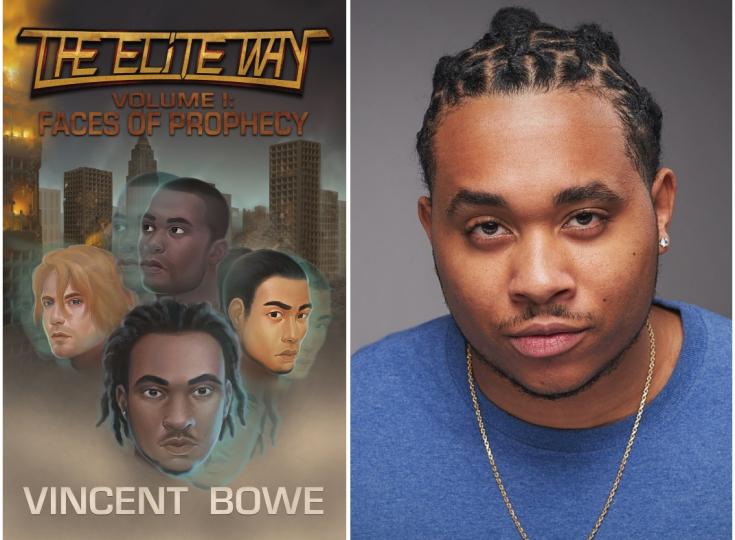 Vincent Bowe worked as a certified health specialist/fitness instructor for five years upon graduating with his bachelor's degree in Exercise Science. During those years, he incorporated his knowledge of the human body combined with his passion for creative writing, giving birth to The Elite Way series. He now lives in Los Angeles where he continues to train, write, and publish original works of fiction and non-fiction. As our Author of the Day, Bowe tells us all about his book, The Elite Way: Faces of Prophecy.

Please give us a short introduction to what The Elite Way: Faces of Prophecy is about.

The Elite Way: Faces of Prophecy is a story based on four fighters who each enter a fight tournament that promises its winner a life-altering prize. These four fighters, Rijo, Jake, Kao, and Richard have their sights altered after a freak disaster occurs at the tournament and they find themselves transported to another world. There, they learn they have actually been chosen to become Elites—one of the universe’s greatest defense. In time, they learn they must eradicate the notion of self and begin fighting as a team for something much bigger than a cash prize and fame. And to make things more interesting, they have to do so while getting accustomed to a world where animal-looking creatures talk and humans glow.

What inspired you to write about a group of people who are transported to another planet?

I wanted to make a story that captured a group of individuals’ ability to adjust to new surroundings. The reason I chose a group is because everyone handles adversity differently. And the fact that they are ultimately forced to team up makes it more interesting because it gives the reader a unique dynamic. How are the individuals handling issues that are presented from this new world? How are they handling issues within the group? These are the questions I wanted to know, and I'm sure readers will feel the same way. For this reason, I felt it was important to tell the story in more point of views than one. Every reader can relate to one or more characters and see themselves in the story.

Why did you pick a tournament as a way to get your characters where you wanted them to be?

I had the main characters meet at a tournament because I knew that it would even the playing field. Each character is arriving with the possibility of a big prize hanging in the balance. It also lets the reader in on the fact that each of these men are still searching for their “why” in life.

You have worked as a certified health specialist/fitness instructor for five years. How has this influenced your writing?

Working as a fitness professional for years and being an athlete for many more has helped me to be more clinical in my writing. I can get really descriptive with parts of the body and different muscle groups because I have such an in depth understanding of human anatomy. Being an instructor, I also know what it means for a person to push their mind and body to the limit and what that work entails. I shed light on this in the story when the main characters endure a strict training regimen upon their arrival to the new world.

Outside of writing I enjoy acting in and directing film projects. I am also a dog trainer who specializes in obedience and security training. Next to writing and fitness, my true passion is handling animals, especially dogs.

Which of your characters has been the most challenging to create?

They each have their own difficulties, but I would say the hardest is definitely Rijo. He has so many mood changes and things that make him tick. He can be laughing with you one minute, and the next he wants to fight you one-on-one. It’s sometimes hard finding that balance and ensuring he remains a likable character. Sometimes I even question why he does some of the things he does.

Did any of your characters ever go off on their own tangent, refusing to do what you had planned for them?

Absolutely! There are characters in the original manuscript that did not make it to the final version. Some characters began as antagonists in my head, but as I developed the story, I discovered they were actually guiding the main characters to their ultimate goal. In those instances, its best to go with the natural flow and allow the character to speak for themselves. One of the great things about writing is there are numerous outcomes and directions you can get to within the story. And as the story unfolds, I, the author, get to learn more about the plot, the universe, and the characters as if I’ve just met them for the first time as well.

Why did you make your four protagonists professional fighters?

The inspiration to write about four fighters came from being a former athlete, and playing contact sports like football and boxing. I also attribute my background in exercise physiology and the fact that I grew up an avid martial arts fan. In some uncanny way, each of these characters represents someone you know in society. Everyone, myself included, is fighting and striving for something. In the characters’ case they come to the tournament for the prize of riches, notoriety, and to be called champion.

I am a strong believer in writing being an art form. It is a person’s (the artist’s) way of expressing their unique ability to communicate and paint a picture with words. My experiences in life have led to me be a man of many thoughts. To be able to release them from my mind in a way that engages the reader, is gratifying. It connects me to those with like minds and that feels good to know someone out there can relate.

If I could spend a day with any character in the book it would have to be Onyx, the staff master, who trains the four fighters. Personally, I love to gain as much wisdom as possible and I think Onyx could teach me a thing or two. Besides it would be cool to pick up useful practices like meditation and staff fighting. Because he’s such a recluse and has not visited the main parts of Waywars’s Gate, I would walk him through Venice Beach in Los Angeles. He’d probably be disinterested at first, but I think the views of the ocean and being around people enjoying themselves would cheer him up.

If you’ve ever seen the graphic of the person with four arms juggling eight different tasks, then you have a clear picture of what it feels like to release the first novel. Releasing my first novel has been a true learning experience. I’ve learned so much about the publishing process. There were definitely moments that were frustrating, and at times you will be discouraged. The biggest thing I’ve taken away from it all is: patience. 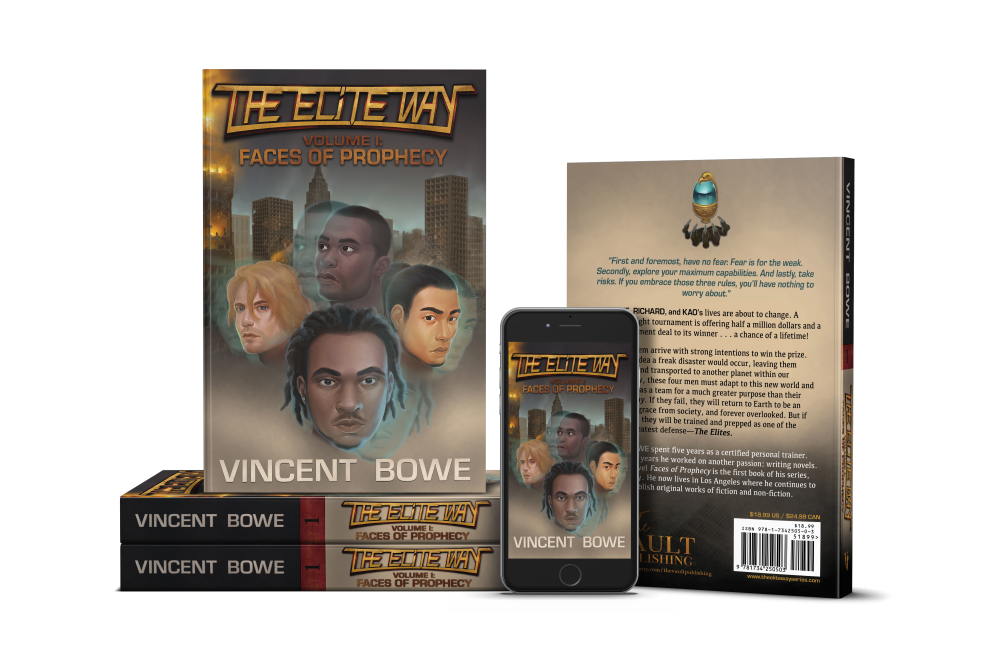 Writing is what keeps me going. I usually start my day by writing in a personal reflection notebook to get my initial thoughts of the day on paper, as well as my to-do list. From there, I like to do some weight and cardio training so that I can focus on the awaiting tasks of being a self-published author. Answering emails, making calls, and occasional check-ins with my editor. Eventually, when I have the time to write, I find a quiet, spacious place to write, which is usually in my office or on my balcony overlooking the mountains. It’s there and then, I can think clearly enough to fill those blank pages.

I’m currently undergoing a self-induced writing-intensive workshop that involves me composing a number of short stories, poems, and thought-provoking exercises, such as formulating a story or title based on a selection of random words. These things help me get through the inevitable stages of writer's block by keeping my thoughts fresh and constantly coming up with new ideas.

Currently, I’m working on the second book of the series. It is slated to be released this November, along with an audiobook version. I am also working with new aspiring authors and writers, to self-publish their titles, whether it be servicing them or coaching them through the fun, yet tedious, process of publishing a book.