W.H. Lock - Urban Fantasy stories with vampires, dragons, and loads of magic
Posted on 27th of July, 2020 by Naomi Bolton 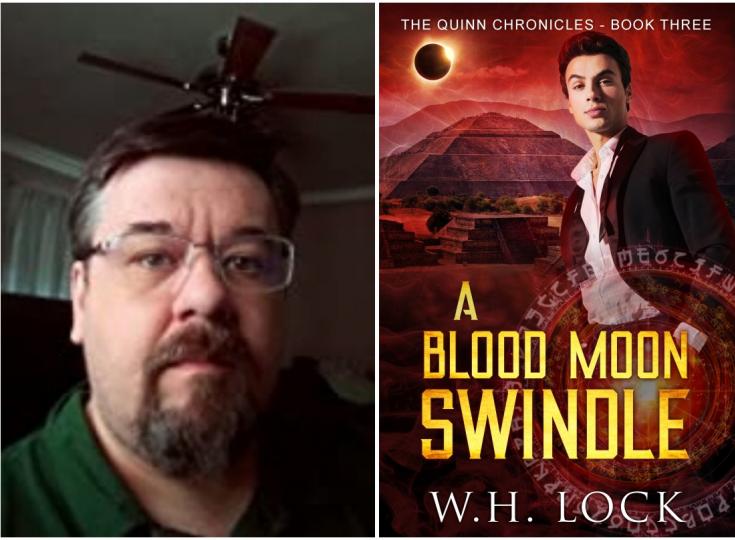 W.H. Lock spent his childhood in rural Illinois, moved to Minnesota, joined the Army, and ended up in Dallas joyfully married with 2 kids and no pets. As our Author of the Day, he tells us all about his book, A Blood Moon Swindle.

Please give us a short introduction to what A Blood Moon Swindle is about.

A Blood Moon Swindle is the 3rd book in the Quinn Chronicle, an urban fantasy heist trilogy.

What inspired you to write about a scoundrel and a sorcerer who has to save the world from an apocalypse?

I enjoy Urban Fantasy a lot. I was a little tired of the grim guy in the leather jacket who stands in the rain brooding all the time. I wanted something fun. Something clever, you know? Movies like Ocean’s 11 and the Sting are a lot of fun and they’re certainly clever. I looked around and found that no one had done a heist story in the genre, so that seemed like a great choice.

And why the apocalypse? Because I wondered “can a con man save the world? Probably…but why? And how would he do it?”

Tell us more about Quinn. What makes him tick?

You grew up in the Land of 10,000 Lakes. How has that influenced your writing?

A lot. The long cold winters in Minnesota make for a lot of inside time, which I spent reading books and writing my own stories.

I’m really good at making baking powder biscuits. So much so that my kids won’t eat mom’s biscuits, but demand that I make them instead. And you know they’re good if they beat out mom’s cooking.

Why did you decide to include an archangel into your story?

I like bad guys that are “doing the right thing” but in the most “wrong way” possible. The ones you can understand the why but the how makes you go “umm, maybe not?” An angel is supposed to be the ultimate good guy, someone who should have the best and most noble interests at heart. Uriel, being an archangel, should be the most noble and have the purest of motives. It’s just his vision of how that happens is a little…off…

What fascinates you about Urban Fantasy?

That it’s set in an almost direct mirror of this world. The best urban fantasy books have real places that you can go find but it has the crazy magic stuff you’ve always wished was real.

I like to go back and read what I wrote a year or two earlier. That way I can see the mistakes I made, and learn from them.

Quinn, actually. It’s hard to write a sympathetic character that’s also a bad guy. Because, while Quinn is the hero of the story, he’s still a scoundrel. In a regular urban fantasy story with the grim guy brooding in the rain, Quinn is the charming but unscrupulous sometimes friend.

It’s a challenge to make that charming rogue the star of the story and stay true to those scoundrel roots.

Yes! It happened with Quinn. In the 2nd book, The Fiddler’s Dagger, I had planned out a whole thing where the team has to steal a thing to get more information about a specific character. One of the side characters sums up the plan and Quinn was supposed to say “Yes, let's do it!” but instead my fingers typed out “no, we're not doing that!” I stopped, backspaced and restarted the scene only to have Quinn say “Nope!” a second time. I laughed, cause you always hear about this, then I deleted the whole scene and started over, approaching it differently but still planning on the same Yep ending. For the third time, I got to Quinn’s yes! part and my fingers typed out “No! Instead, we’re going to summon a dead god!” Then I thought, ‘okay, let’s see where this goes…”

So, that’s why in the middle of The Fiddler’s Dagger, Quinn summons Bacchus, the Greek god of partying.

Right now I’m working on the 6th book in my superhero noir series. It’s titled The Long Hard Time, and it’s probably going to be out in Sept, 2020.

They can find me (and my work) at whistlelock.com, interact with me at twitter.com/whistlelock, facebook.com/whistlelock, Instagram.com/whistlel0ck (fooled you with that zero) and of course they can always email me at [email protected]. I’m most active on Twitter.