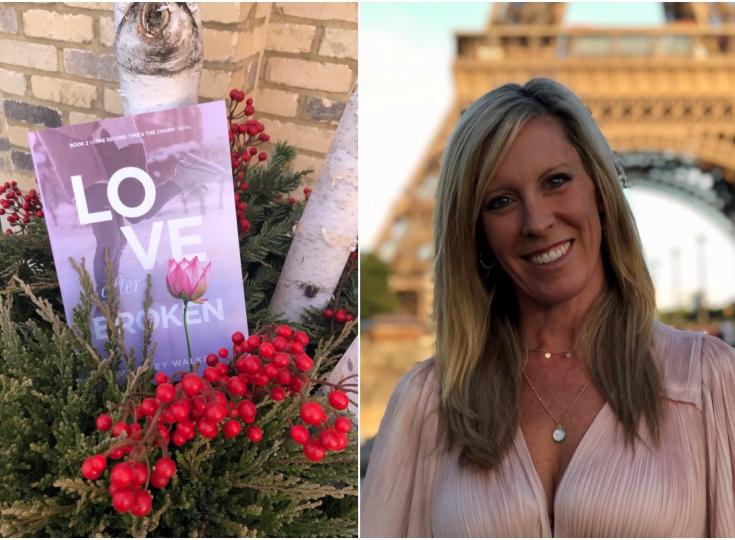 Whitney Walker starts and ends each day with gratitude to the tribe who share her messy but beautiful life. She writes for all the hopeless romantics who believe tears and laughter are best friends, second chances are better than firsts, and true love is worth fighting for. With faith, wine, and chocolate by her side she aspires to be the best mother to two, girlfriend to "the one", daughter, friend, and yogi she can be. It's a work in progress, and she appreciates the chance to share her life learning through writing.  As our Author of the Day, Walker tells us all about her book, Love After Broken.

Please give us a short introduction to what Love After Broken is about.

Love After Broken is the second book in the Second Time’s the Charm series. There is a heroine in each decade of her life throughout the series, from 20-50 years old. Each has a love story as well as the friendship between the four women. You get the main character's backstory in each book, they come together in a dramatic incident, then their stories are connected going forward. Scenes go across the books, delivering each from the main characters POV.

Liz, or Elizabeth (a story in itself!) is the fortysomething character in the series. Liz’s story is about the second chance with her first love, defining true love, and the silver linings, wisdom, and life lessons that are hard-earned through heartbreak. Sean is a doctor who has saved plenty of people but couldn’t save his own wife. He is starting over as a single father when he crosses the path of Liz, his first love, again. When brought together again by the worthy cause of Sean’s wife’s legacy, they have the chance to live the fairy-tale ending that would fix everything broken, but not without the collateral damage of seventeen years in the making.

What inspired you to write about a Christmas gift of a second chance?

It’s the most wonderful time of the year! I’m a holiday fanatic, minus Halloween. Birthdays are also considered holiday weeks in my book so I include birthdays in the books too. The books each run from the beginning of November through March (ish) so there is Thanksgiving which plays into the theme of gratitude which is a part of the overall story. Then there is Christmas. No other time of the year has the same romance and magic! Kissing in the falling snow, cuddling in the cold, traditions that can be passed along. I include real family traditions, but the sad stories related to the holiday are also truth, though not necessarily mine. There are also a lot of family dynamics that come into play for great storylines.

This summer I found three notebooks with ninety-five pages of the first book I wrote at age twelve. I was very dramatic even then! The book had multiple love interests, breakups and reunions, female friendships and hopes and dreams. The story wasn’t much different than my grown-up versions! I didn’t finish the book at twelve and I wish I had because I was disappointed there was no happy ending written!

Five years ago I was sitting in a meeting for my day job and people started talking in my head. For a hot minute, I was worried I was becoming schizophrenic. And, my mother has reminded me I’d had a host of imaginary friends in my youth, so I was familiar with fake people as sidekicks. I saw things as movie scenes and I just sat down and started typing. One book became two, and two became three. As my own story unfolded, the words kept coming. It was cathartic, and an escape from real life.

I’d lose hours of the night and not remember what I wrote in the morning. Then, I became more disciplined and started writing from 4:30 a.m. – 6:30 a.m. each day before work. I wrote on my phone at red lights all the time to many a honk (but luckily no accidents!) I stole fifteen-minute increments anytime I could. I hid in rooms on vacation or on holidays until my family dragged me out. I ran out of yoga classes and wrote as fast as I could. And, don’t tell my bosses, I didn’t pay attention during A LOT of meetings when people were talking in my head. Now, I feel like I can’t start my day without a little time with my fake people before the real ones. They keep me grounded. I write so others can lose themselves while they read. I lose myself when I write. Sometimes I don’t even brush my teeth or drink water all day long!

It was a dream to publish but was more of a hobby. Everything changed however when I knew I had to give back. I had written an addiction storyline in the first book One Day After Never, then my life twisted and turned to match eerily. Love After Broken is dedicated to a colleague and friend who passed away from stomach cancer. The third book has another cause I will contribute the proceeds to, though I won’t spoil the storyline! I realized the beauty of this platform to tell stories of real-life that can educate as well as give back. Giving back was my inspiration to live out this dream.

The characters are not, but the situations, experiences, and relationships are real life. Parts of Lynn are parts of my friend Candace who passed away. The men all have different characteristics of men that I respect and admire, though they aren’t based on a person, but more of the collective attributes and character I believe constitutes great men. Men I would want to date – or marry!

A part of me is in each one of the women. Funny, or not so funny, is that I thought I was most like Liz. Until the first beta readers of Love After Broken didn’t like her. At all. When I reread what I had written, I didn’t like her either. It was a reflection of where I was in my life at the time. Alexandra is a compilation of the spiritual teachers I’ve followed along with the yoga teachers who keep me somewhat sane. Peyton’s struggle to understand her mother mirrored some of my own experience, and well, before love softened me too, I was Cassandra. I’ve really struggled with the romance genre wanting heroines who don’t exhibit unacceptable behavior because I want art to emulate life. I like real - messy and beautiful - at the very same time.

Tell us more about Liz and Sean. What makes them tick?

Liz is the aspirational human for many. Selfless, living in gratitude for what she’s been given, and in service to others. She wants to be a good friend, mother, and partner. She’s also passionate, but smart women who stay home and raise children always question what happens when their babies are grown. The book reflects the struggle between choosing what you think will make you happy and sacrificing that happiness so everyone else can be. It’s a tough choice that many understand.

Sean has always known what he wanted and pursued it. He was willing to work at his job and relationship to be the best doctor, husband, and father he could be. He thought he could dodge any bullet coming at him. When faced with the truth that wasn’t the case, he felt the pain but kept moving forward and became softer and better for it. He still has an edge of ego to prove himself worthy, but he’s learned the hard way what’s important.

Please tell us more about the cover and how it came about?

I was cramming as much knowledge about publishing a book into my days, watching YouTube as I was burning yet another grilled cheese as I multitasked. It was a video from an author who cited her cover designer as a woman in Sweden. I loved the look of it and the rest of her portfolio. I wanted a pretty cover and the only element I was completely attached to was the lotus flower. With it’s connection to yoga and symbolism of growth from the mud into something beautiful every day it represents the characters and the stories. Each book in the series will have the flower opening just a bit more. The periwinkle color of the cover is for Stomach Cancer awareness per the book’s dedication and donation. And, of course, the couple on the cover couldn’t reveal who might be getting the girl!

I’m working on book 3 of the series! The thirty-somethings love story. I wrote it first and intended it to be the debut novel but changed my mind. I wrote all the books in third person so it’s a rewrite, but I still love the storyline about becoming your best self and a second chance after a tragic accident.

The fourth (and I believe final, but who knows?!) book is yet to be written but these characters have been beside me for years and I can’t imagine them not being a part of my life. Sometimes they have felt so real I thought they were sitting beside me in the car talking to me. I wish I was kidding. Maybe I should do more yoga. They are so real I can only hope and pray that I see them come to life on the big screen someday so others can see them in the same real way that I do. After you read, I hope you will connect and tell me who you think would play them in a movie of the series!

It’s important that all my characters have grit, gratitude and grace. They receive the gift of perspective in their own way. Silver linings are always available if you look for them. Second chances are sometimes better than the first time around, and laughter and tears are best friends. We get through tragedy and triumph together.

Giving advice I shouldn’t! Thus, my love of controlling the actions of characters in my stories. They can give advice to each other all day long in every chapter!

In all seriousness, I can go all into whatever I am doing in a heartbeat. I can maniacally focus on writing for eleven spare minutes and give it all that I have, then jump into a work call and be all-in on a dime.

I’m also super blessed with amazing energy that lets me produce words before work, do the day job, then get back to the business aspects of publishing, then write some more.

I also have a private facebook group. They are my tribe of co-conspirators in this journey. I’ve not opened it to the public yet but will issue an invite in the new year to those connected via another social platform. I love doing book clubs too, virtual or in person!