William A. Liggett - Action-packed Cli-Fi
Posted on 27th of June, 2017 by Naomi Bolton 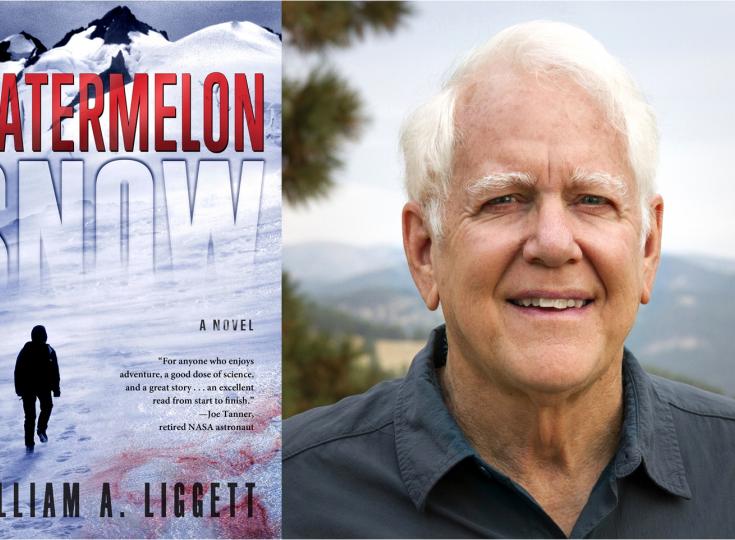 Some of Bill Liggett's earliest memories are of climbing over the rocks near their family cabin in the mountains. He has always had a love for nature and a keen interest in science, which inspired him to start writing books in the "cli-fi" genre, where behavioral and earth sciences are blended to create riveting fiction. As our Author of the Day, Liggett talks about his book, Watermelon Snow, his research and reveals why he put a positive spin on a book about global warming.

Please give us a short introduction to what Watermelon Snow is about.

Watermelon Snow takes place on the Blue Glacier in the Washington wilderness. Climate scientist Dr. Kate Landry makes a remarkable discovery, triggering a series of tragic events that threaten the lives of everyone around her. Against the backdrop of global warming, the book blends adventure, mystery, science, and suspense. Unlike the many cli-fi titles that follow a dystopian, apocalyptic formula, Watermelon Snow offers a more hopeful future based on solutions to climate change.

What inspired you to write a story from the perspective of a climate scientist?

I thought one of the main protagonists in Watermelon Snow ought to be someone studying the impact of global warming on our planet. It was also important to me to include a strong female character as a scientist.

Where does your passion for earth sciences come from?

I grew up in Denver, Colorado, and some of my earliest memories are of climbing over the rocks near our family cabin in the mountains. My grandfather was a prospector and mining developer who shared his experiences mining gold in the Rockies. My passion comes from the inspiration I’ve felt in the mountains as well as the rewards scientific understanding brings.

How did you manage to keep readers in suspense throughout the book?

I envisioned one overarching secret that drove the story forward with twists and plot shifts along the way. Almost every chapter includes some crisis—either interpersonal or potentially life-threatening—that keeps the tension high. Occasionally, the story slows down briefly to give the readers a breather.

How much research did you have to do for this book, and what was the most interesting part of your research?

Even though this is a work of fiction, I wanted it to be grounded in real science, much like the writing of Michael Crichton and Robin Cook. The story could then teach cutting-edge science and extrapolate from the real to an imagined application. I was particularly interested in showing the group dynamics among members of a research team.

To make the science credible, I had to research a number of fields, including glaciology, paleontology, palynology (the study of pollen and spores), influenza epidemiology, clinical pathology, public health, and underground tunneling and construction. I also explored the Hoh Rainforest in Washington State for the setting, taking a four-day backpacking trip there.

The most interesting part of this research was weaving together the various threads of science, along with the interplay among the characters. It was like writing a complicated score for a symphony.

They’re not so much secrets as interests and hobbies, including folk guitar and singing, flying small two-passenger aircraft, talking on the ham radio, sharing my life experiences through mentoring, continuing a program of behavioral science research I began years ago, and hiking in the mountains.

Readers were surprised by the fact that you also had a more positive take on some of the effects of global warming. Why did you take this approach?

I believe that all life is about problem solving, whether individually in our daily lives or collectively as groups and nations. I also think we humans make the most progress when we apply our scientific knowledge. The first step is to find out all we can about what we are up against with global warming—through science. Then we can develop solutions.

I want to increase awareness and caring about how our planet is no longer the same due to global warming. Watermelon Snow portrays characters who strengthen their commitment to addressing this problem. Yet the reader can recognize that the characters are also human, grappling with their personal and professional issues. Seeing the beauty, loss, and inspiration through the eyes of a scientist may be a new experience for some. Science is not just about collecting and reporting data dispassionately as many might think.

What was the most challenging aspect of writing this book?

It was challenging to develop all the threads of the plot involving multiple characters with their different perspectives and agendas without either simplifying the story or getting the threads so tangled it would be hard for the reader to keep them straight. I didn’t want to water down the complexity or simplify the science, but rather respect the intelligence of the reader to follow along.

Tell us more about your writing habits. Favorite writing spot, best time of the day for you to write etc.

I have always been most creative in the early morning, so I started writing every day at 5 a.m. Soon, I became so absorbed in the story that I would wake up earlier, thinking about what the characters were doing, and get up to jot down my thoughts before I lost them. At that point, my days often began at 4 a.m. But an afternoon nap was always an essential part of my day.

For years, I tried out various computer programs for converting speech to text, beginning with IBM’s Via Voice and now Nuance Communications’ Dragon for Mac. I wrote the entire first draft of my novel dictating it into my laptop. Since I didn’t want to disturb my wife, who was still asleep at that hour, I worked in our dining room with the doors closed, accompanied by our two cats.

Do you plot out your stories before you write a book?

Yes and no. I have an idea of the basic elements—the setting, the main characters, the essence of the plot. I find that the story unfolds best when I brainstorm a small number of chapters ahead of where I left things the day before. I don’t always know what specific issues the characters will have to face and the solutions they might achieve. Sometimes an idea will come to me in the shower. This keeps the story fresh for me and, hopefully, the reader.

I enjoyed writing stories when I was in school, but never thought I would work at it in earnest. After I retired, I began to think seriously about writing. About two and a half years ago, I started writing the novel. Once I began and received the full support of my wife and family, I experienced nothing but forward momentum until it was done.

I’m working on the second half of the life of a writer—the process of marketing my first novel. There’s so much to learn and experience through trial and error and the guidance of my publisher. It’s too soon to think about writing again full time.

I’m frequently asked whether there is a sequel to Watermelon Snow. The honest answer is, I don’t know. My first novel was a special experience. At the same time, I have developed a fondness for Grant and Kate, the main characters. Maybe they’ll visit me here in Boulder, and I’ll interview them to find out what they’re doing now.

Where can our readers discover more about your work or interact with you?

I would love to have readers visit my website, williamliggett.com, and become familiar with the blogs I have written and then post their comments. I have shared my philosophy of writing there and even described my experience using technology to dictate my first drafts.

In addition, I am becoming active on the Goodreads.com website, where I can respond to readers’ questions and comments.

I enjoy using Twitter (@liggett1) and would welcome having readers follow and interact with me there as well.