Yaroslav Barsukov - A Poetic Tale of Love, Loss, and Otherworldly Powers
Posted on 9th of April, 2021 by Naomi Bolton 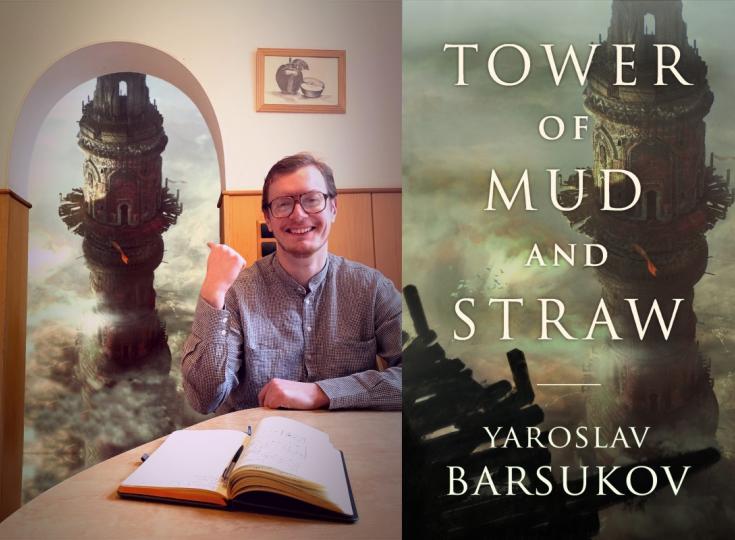 After leaving his ball and chain at the workplace, Yaroslav Barsukov goes on to write stories that deal with things he himself, thankfully, doesn’t have to deal with. He's a software engineer and a connoisseur of strong alcoholic beverages—but also, surprisingly, a member of SFWA and Codex (how did that happen?). At some point in his life, he’s left one former empire only to settle in another. As our Author of the Day, Yaroslav tells us all about his book, Tower of Mud and Straw.

Please give us a short introduction to what Tower of Mud and Straw is about.

It’s about a disgraced minister who, after taking pity on innocents and disobeying his queen, gets exiled to the border. It’s about a mammoth anti-airship tower, the largest defensive structure in history, propped up with devices brought by refugees from another world. It’s about longing to return to a place in your past that keeps pulling you back.

Assassinations, ancient legends, and a possible apocalypse for all—what could be better?

I saw the novella in a dream. I rarely get vivid dreams, but this one I remember: looking through the foliage at a Renaissance facade, knowing somehow I was in a province, that I’d been banished there. There was humiliation, but also a sense of wonder: somewhere behind that facade hid magic.

Another thing was, I wanted to write about architects and artisans. I briefly toyed with the idea of an architect main character, but my knowledge in this area is non-existent and my laziness is great. So there you go—we've got Shea who is sent to the border to oversee the construction of the titular Tower.

Why steampunk? What drew you to the genre?

I don’t think the novella has a genre in the strictest sense of the word. Steampunk elements are strong, but so are the gaslamp ones; one could also say it’s science fantasy, and buried within are dashes of cosmic, Lovecraftian horror (especially in the end). There are some strands of magic realism DNA in how the supernatural is approached in an everyday, almost workmanlike manner. Reviewers have compared the novella to everything from Roger Zelazny to Robert Silverberg to the works of China Miéville.

It’s just, you know, a world. I saw it, and I wrote down what had happened in it. The genre-specific elements are mostly there for stylistic purposes, to create atmosphere. Could I have done without the airships? Sure. Would it have been that cool? Nay!

Tell us more about Shea Ashcroft. What makes him tick?

He’s quite a tortured fellow, isn’t he? He’s a boat tossed between currents—he craves grandeur, but he wants to do the right thing. He makes hard decisions, trying to assuage his conscience afterwards—and when that proves impossible, he reaches for the bottle.

Yet in the end, he still does the right thing.

I play guitar, classical as well as electric (the latter solely with an E-Bow, though), but that’s hardly the most interesting thing.

The interesting thing is, I used to be a hobbyist game programmer. The problem was, I started out in the 2000s—which was the worst time in history to do game engine development. The tools that now come almost for free carried a sky-high price tag, while the complexity kept increasing exponentially. The 90s, the era of “hero programmers,” was over; you had zero chance to keep up on your own.

I remember when Half-Life 2 came out, there was one puzzle where you had to push plastic drums into the water underneath a ramp. The barrels would float up and tilt the ramp up, allowing you to walk across to the other side; this was the first physics-based… anything, really, in games. Everybody and their dog was playing Half-Life—game developers were, too. You could go to the forums and notice the exact moment someone would hit the drum/water puzzle: they would stop posting and start integrating physics into their own engines. 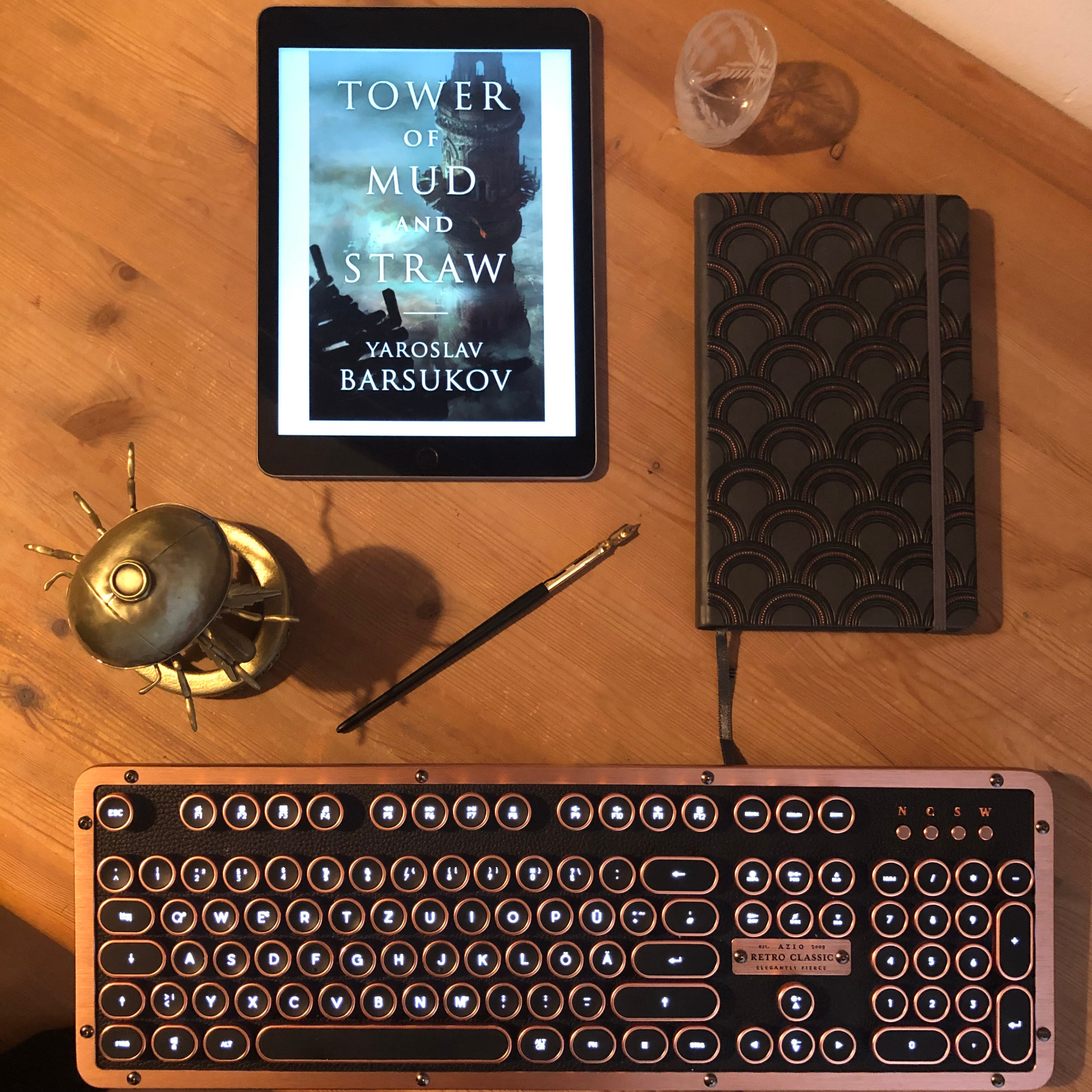 I love writing surrealism! Do you know that Gurdjieff believed we live our lives in a state of hypnotic "waking sleep"? I believe that, too, but rather than seeing it as a disadvantage, I tap into the dream. It’s describing the waking world that causes me problems :)

Your world is both fantastical and gritty. Why did you create it this way?

The grittiness stems from the characters. They have to operate like real people—or live dolls, if you wish. That’s why there are never any wizards or dragon lords in my stories: I have no real idea of how those guys tick.

The fantastical layer provides rich possibilities for metaphor and allusion. You can mold the world any way you want, making it reflect what the characters are feeling.

Do you plan your stories out before you start writing, or does a lot of it just "happen" along the way?

Oh, I outline—a lot! Usually, a significant chunk of the story “appears” to me, and I have to capture it lest I forget it. You know how it happens with good ideas? Grab them by the tail, or the next time you look, they’ve already dissipated.

And once I’ve got that initial part written down, it’s easy to keep outlining. The hard part, for me, is sticking a fork in it!

Why did you title this book "Tower of Mud and Straw"?

It’s a metaphor. The title works on two levels: there are certain grave problems with the tower’s construction (mild spoilers for Part I, hehe); but it also alludes to the fact that some of us (myself included) while away our lives in an incessant climb toward the top that is, for all intents and purposes, worthless. Career, success, all the gilded things.

Like Marty from True Detective put it, “The solution to my whole life was right under my nose. And I was watching everything else.”

Political intrigue plays an important role in the story. Why did you take this approach?

The answer is quite simple: Dune is one of my favorite novels :)

I talk to myself, “acting out” the dialogue before writing it down.

I also “allow” the inspiration to come to me only at a certain part of the day. Philip Glass described this trick in one of his interviews: I believe his time is 10 am to 12 pm, and mine is from 1 to 3 am. The kiddo goes to sleep, the street gets quiet, and I can delve into the imaginary worlds.

Well, now that Tower has been shortlisted for the Nebulas, looks like I’m writing Part 2!

Actually, I’ve outlined the second book almost a year ago, together with the first. Tower’s finale had been designed so that the novella could stand on its own, but also so that a continuation would feel absolutely organic. There will be next to no new elements, just further development and exploration of the existing ones. In a way, I’m sad people didn’t get to read both parts back-to-back.