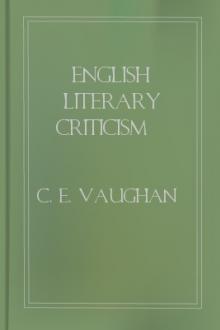 In the following pages my aim has been to sketch the development of criticism, and particularly of critical method, in England; and to illustrate each phase of its growth by one or two samples taken from the most typical writers. I have in no way attempted to make a full collection of what might be thought the most striking pieces of criticism to be found in our literature. Edited by C.H. Herford.

e city council was backed by a large body of serious opinion throughout the country. A proof of this, if proof were needed, is to be found in the circumstances that gave rise to the Apologie of Sidney.

The attack on the stage had been opened by the corporation and the clergy. It was soon joined by the men of letters. And the essay of Sidney was an answer neither to a town councillor, nor to a preacher, but to a former dramatist and actor. This was Stephen Gosson, author of the School of Abuse. The style of Gosson's pamphlet is nothing if not literary. It is full of the glittering conceits and the fluent rhetoric which the ready talent of Lyly had just brought into currency. It is euphuism of the purest water, with all the merits and all the drawbacks of the euphuistic manner. For that very reason the blow was felt the more keenly. It was violently resented as treason by the playwrights and journalists who still professed to reckon Gosson among their ranks. [Footnote: Lodge writes, "I