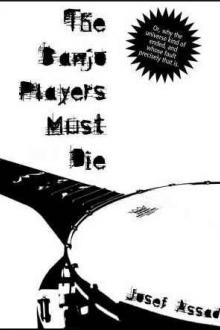 A few centuries into the future, not much has changed about the basic characteristic of civilization, which is incompetence and boorishness. Wishing to end the world, the angels are left to their own devices by a God more concerned with new prototypes of bigger boobs for the next universe. Ramses, obsessed with hamster love, is selected to be the prophet of doom in a travesty of a selection process and leads humanity after much travail to Heaven. Which, as matters turn out, has been somewhat overrated. And the mysterious intergalactic race of banjo players flees on.

e. The Farting Nun Prank was also widely attributed to Ramses, though he had by the time it was committed learned to keep his unclean pastimes to himself. But really, we should quit it with the Raped Tomato Incident now.

So, apart from the Raped Tomato Incident and a number of similar events, Ramses Abasiri's youth progressed without any lasting damage to humanity at large. He excelled in chemistry, oddly enough, though his chemical adventures seemed to confine themselves to a hitherto fruitless search for aphrodisiacs and some decidedly more successful attempts to further aggravate the smell of Hydrogen Sulfide, the chemical associated with rotten eggs.

In a sense, it was a shame that Ramses became the Prophet of End Of Days on the 16th of Nobemver of the year 2484 (The eleventh month of the year has its `v' and `b' switched entirely at random, since it amuses the people to hear it mispronounced. The advent of direct democracy had rotted the political process into a never-ending series of polls

montain
5
The book description listed here for this novel does not match the story, but I think that is more a function of how complex it is. I'm not sure if it is fantasy, satire, shock lit, social commentary, or just something cooked up while under the influence.

Having said that, I'll add that I've never read anything like this. I think the reviewer below me might not have read more than the first chapter which is slow, but the whole work is completely insane.

A Helpful Critic
1
This book is like Monty Python but sans humour or plot. Or anything meaningful or interesting. It is a constant stream of affected silliness that does not just fall flat, it becomes almost tauntingly annoying in its haughty self assuredness that strangeness for strangenes' sake is the height of literary brilliance. The book has piqued my interest though, but only in the author. I have never encountered a voice so supremely ignorant of its vapidity. Imagine a character from MTV's Laguna Beach deciding to write a novel about how important her opinions are, multiply the self importance by 1000 and then add a Jumbo Dose of intellectual, zany care free affect. An obnoxious self love is the more than an aspect of this diatribe about humanity, it is its total essence.
12/01/2007

aristotle
5
Completely shameful in the most amazing and wonderful way possible.
11/10/2007

Kareem Kenawy
4
I didn't really enjoy this book at first. Self-admitted lack of plot, almost no characters - just hamster molesters with bizarre names - and general similarity to Good Omens, but once you stop all the judging and ride the freakshow rollercoaster you'll be laughing all the way.

So yea, I guess it's sorta like Good Omens. but this one had more writers; a microbus driver from el sabteya, a 10-year old Douglas Adams and a perpetually time-traveling Ramses Abasiri.
09/10/2007

mandaya
5
Josef Assad's novel should be the next Big Thing. Think Chuck Palahniuck meets Thomas Pynchon meets Douglas Adams. And all of it - or so the voices in my head seem to tell me - told in the familiar voice of Monty Python's. On crack.
To be taken in small doses only - there's so much stuff going on. And yes, some of the puns are not as funny as the author thinks, but some are outright brilliant.