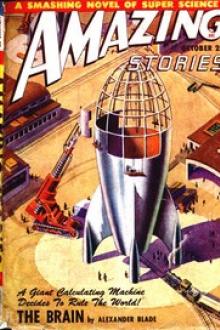 Karn was only a savage, but he knew a thing or two about the way justice should be meted out—and he did it

e cries they swarmed forward, long spears pointing ahead at waist level. With a scream of fear, Ven spun around and ran. Andra and Harus stood petrified.

Their reactions were typical, apparently, for the Green Ones came on as though used to encountering little resistance. Even the sight of Karn, huge of frame and heavy-thewed, draped in his wolfskin, failed to register. It was a fatal mistake.

As the first of the Green Ones reached him Karn side-stepped nimbly, sweeping the spear aside and tearing it from its bearer's grasp. Karn's other hand shot out and connected with a snout. The man-lizard dropped, its face turned to green and oozing pulp.

In Karn's hands the spear became a club. The Green Ones turned toward him in a body, trying to fend off this unexpected attack. They were met by a whirling staff that crushed whatever it hit. Karn's power was overwhelming. His rush cut a swath of death through the green ranks, forcing them back.

He heard Andra calling and looked back over his

Lisa Carr
2
Karn, a Cro-Magnon, is abducted by a flying globe and taken to Mahlo where the women have made their men women so the men are afraid of the Green Ones. Can Karn teach the men to be men and to control their women? Wouldn't it just be easier to teach the women to fight? Is it only a coincidence that Karn is only two letters different from (Captain) Kirk?
11/10/2014

JoJo Biggins
2
In a word, the story is quaint. It's not horrible until the end where it becomes hopelessly childish. Libtards will find it intolerably sexist.
07/02/2014

A man is kidnapped to another planet.
He is a fighter and this planets last hope.
The people he is now with, have forgotten how to fight.
Can one man make a difference?