The Gay Adventure
A Romance 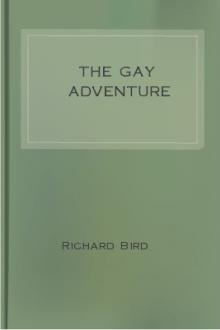 The Gay Adventure
A Romance

A brain-relaxing book. It is all romance and adventure, impossibility and improbability. No such people could be in real life, and it is not often that one finds them in fiction. The author has a pleasant style; he writes as if he enjoyed what he wrote and expects his readers to enjoy it with him. There is a lot of fun in the book, but it is not always of the highest order. The characters are English and the scene is laid in England, London being the headquarters of this gay and festive party.

mpathetic. "You fainted; that is all."

She gave the ghost of a shudder: "I fainted?"

"Yes. The horse, ran away, but there was no accident."

This thought for another in the midst of her own recovery flushed Lionel's being like a draught of wine. Hitherto she had been merely a pretty aristocrat and (apparently) a delightful girl. Now she was more--a divine human whom he longed to kiss, caress and call "You darling!"

She was nearly herself again, and gave a little laugh. "Let us hope he was a fat one," she said. And then, after a pause: "Who stopped the horse?"

"Oh, I was lucky enough to do that," he replied with an assumed jauntiness, wishing he could feel it was an every-day business. "It was not hard."

"Others appeared to think differently," she replied with a grave admiration that pleased him.

"Then, madam, they can not have seen you," he smiled. Really, the

Leah A. Zeldes
5
What a marvelous farce! A farce in the best, classic, theatrical sense of that term: P.G. Wodehouse once described his own work as musical comedy without music, and this 1914 novel definitely meets that description. It's loads of fun! An impecunious writer stops a runaway horse and plunges into storybook adventures on behalf of a beautiful actress. She reveals a tragic, romantic and unlikely past and enlists his aid in an international intrigue. Complications arise with the interventions of her saucy French maid, a middle-aged taxi proprietor, a henpecked churchwarden and a well-to-do waster with a bad case of ennui. The plot, worthy of Wodehouse, keeps you turning pages to find out what happens next. I looked up Richard Bird (1881–1965) in search of others of his works, but it appears that most of his oeuvre were boys' school stories, none of which I could find online.
10/02/2015

Linda Otto
5
Ha! I've always wanted to be able to refer to a book as a "romp," but I was never certain how a romp would be defined...until this book. This is it, what might be considered the definitive romp! It is ludicrous, improbable, absurd, and totally engaging. Even when you catch on, which you are sure to do, you won't stop reading because you'll want to find out how all of the absurdity resolves itself. Enjoy!
10/09/2010