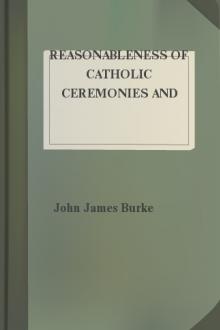 n and death of Christ are the sinner's only refuge, the just man's only hope; that it can not but be good and wholesome to turn our minds and our hearts toward this subject; that frequent meditation on Christ's passion will move us to avoid sin, which caused it; and that nothing can more efficaciously cause us to think of Christ's passion and death than the holy sacrifice of the Mass.

III. Ceremonies of the Mass

THE Mass is the great sacrifice of the New Law. It was foreshadowed by all the sacrifices ordained by God in the Old Law. They were shadows; it is the substance.

We learn from Genesis of the fall of man. Universal tradition, as well as Scripture, informs us that the creature formerly became guilty in the eyes of the Creator. All nations, all peoples, endeavored to appease the anger of Heaven and believed that a victim was necessary for this purpose. Hence sacrifices have been offered from the beginning of the human race.

Cain and Abel offered victims; the one the first