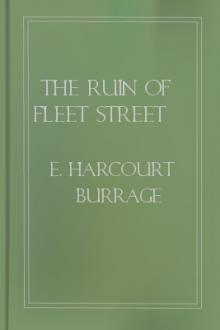 In the following pages I have recorded a little of my experience of life in Fleet Street. Had it been my object to write a sensational book I could easily, without diverging one hair's-breadth from the truth have given to the reader a more extended series of painful narratives of the influence and destructive effects of what is often called the "enemy of man."

n the gloom of a tavern. Drinking, smoking, talking, dreaming, the hours passed away, and when at last the party fairly broke up darkness had arrived.

How much of our money we had spent, I scarcely like to say for fear of not being believed. Of my little pittance fifteen shillings were gone, and the others had been "liberal" in proportion. There were married men among them, and what was left in the publican's till was wanted at home. But of that I knew nothing-cared nothing-as I lay down to rest with my brain in a whirl of excitement, seething with mad dreams of fame and fortune, idle enough as time has shown, but, like the fantasies of the opium-eater, very pleasant while they lasted.

OUR ROOMS IN FLEET STREET-SHABBOT AND RECKLESS.

AFTER a few weeks, during which I lived by odd contributions to the journals published at "Will's" [Young Briton etc.] office, I secured a regular engagement, and one wa

Leah A. Zeldes
1
I'd hoped this was a history of journalism. Instead it's a not-very-entertaining collection of cautionary tales about assorted drunkards connected with London literary and newspaper life and their bad ends.
07/24/2009