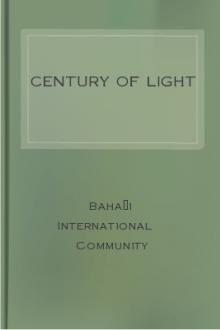 The conclusion of the twentieth century provides Bahá’ís with a unique vantage point. During the past hundred years our world underwent changes far more profound than any in its preceding history, changes that are, for the most part, little understood by the present generation. These same hundred years saw the Bahá’í Cause emerge from obscurity, demonstrating on a global scale the unifying power with which its Divine origin has endowed it. As the century drew to its close, the convergence of these two historical developments became increasingly apparent.

to proclaim to responsive and heedless alike the establishment on earth of that promised reign of universal peace and justice that had sustained human hope throughout the centuries. Its foundation, He declared, would be the unification, in this "century of light", of the world's people:

In this day ... means of communication have multiplied, and the five continents of the earth have virtually merged into one.... In like manner all the members of the human family, whether peoples or governments, cities or villages, have become increasingly interdependent.... Hence the unity of all mankind can in this day be achieved. Verily this is none other but one of the wonders of this wondrous age, this glorious century.(6)

During the long years of imprisonment and banishment that followed Bahá'u'lláh's refusal to serve the political agenda of the Ottoman authorities, 'Abdu'l-Bahá was entrusted with the management of the Faith's affairs and with the responsibility of acting as His Fathe 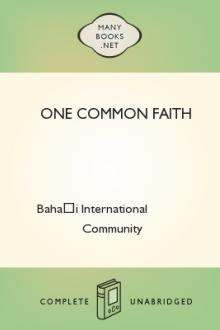 The Prosperity of Humankind

Ron Price
5
Readers can go to the following sub-section, the following URL, of my website where I integrate the perspectives of this book, Century of Light, into my own view of history and my experience of studying and teaching it from 1964 to 2014 at: http://manybooks.net/titles/communityb1926719267-8.html
06/09/2014