A Budget of Christmas Tales by Charles Dickens and Others 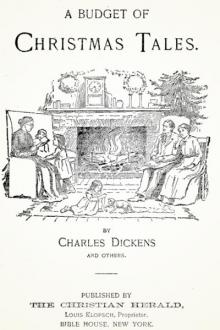 gether. They were succeeded by a clanking noise deep down below, as if some person were dragging a heavy chain over the casks in the wine-merchant's cellar. Scrooge then remembered to have heard that ghosts in haunted houses were described as dragging chains.

The cellar-door flew open with a booming sound, and then he heard the noise much louder, on the floors below; then coming up the stairs; then coming straight toward his door.

His color changed though, when, without a pause, it came on through the heavy door, and passed into the room before his eyes. Upon its coming in, the dying flame leaped up, as though it cried "I know him! Marley's ghost!" and fell again.

The same face: the very same. The chain he drew was clasped about his middle. It was long and wound about him like a tail; and it was made (for Scrooge observed it closely) of cash-boxes, keys, padlocks, ledgers, deeds, and heavy purses wrought in steel. 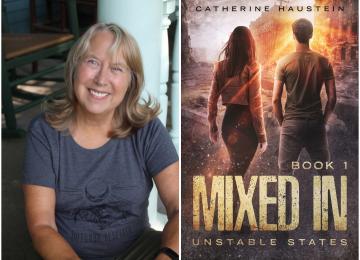 Catherine Haustein - Sci-Fi set in an Authoritarian Society
FEATURED AUTHOR - Born under a half-illuminated quarter moon, Catherine Haustein is never sure if she favors light or shadow. Her Unstable States series contains ample portions of both. The author and chemist lives and teaches in a tidy town in Iowa on the shores of a lake which sometimes is cited for elevated fecal coliform levels. A graduate of the Iowa Writers' Workshop, Catherine weaves the passions and optimism of science with the absurdities of the present and dark possibilities of the future throughout… Read more