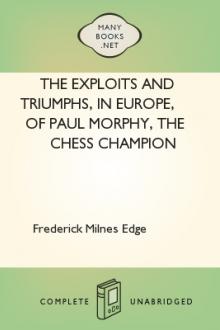 had made "a draw" in the third section of the tournament--with Dr. Raphael, of Kentucky. Now was to be decided the championship of the New World, and notwithstanding that the majority anticipated the result, yet many of the spectators thought that the Western knight might prove a hard nut for Morphy to crack. Mr. Paulsen's game is steady and analytical to a nicety. Modelling his operations on profound acquaintance with Philidor, he makes as much out of his Pawns as most others of their Pieces. In reply to Mons. de Rivière, I once heard Morphy say, "Mr. Paulsen never makes an oversight; I sometimes do."

It is only justice to Mr. Paulsen to state, that he never for one moment imagined that he would beat Mr. Morphy. So exalted was his appreciation of the latter's wondrous powers of combination, that he has been frequently heard to declare--"If Anderssen and Staunton were here, they would stand no chance with Paul Morphy; and he would beat Philidor and Labourdonnais too, if they were alive." And whe

Greg B.
5
This is a very good book covering the exploits of a young chess genius in Europe. It details in this account in 1858-59 how Paul Morphy dominated all of the best chess champions in Europe to such a level it left everyone in a daze. He even played 8 talented opponents simultaneous while blind folded and won most of the games. Paul Morphy was from New Orleans, and if you are not familiar with his story, you should be.
10/20/2015