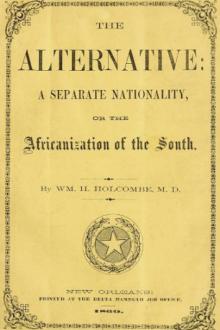 population, will not the dark enigmas of free-labor civilization press heavily upon it, and the dread images evoked by the prophetic wisdom of Macauley arise indeed--taxation, monopoly, oppression, misery of the masses, revolution, standing armies, despotism, &c.? It may yet deserve the strange epitaph written for this nation by Elwood Fisher:

"Here lies a people, who, in attempting to liberate the negro, lost their own freedom."

Have we rightly comprehended the fearful import of those words, the Africanization of the South? According to the present rate of increase, in fifty years the negroes of these States will amount to twenty millions. Suppose them to be restricted to their present arena. Suppose them in addition to be free. Imagine the misery, the crime, the poverty, the barbarism, the desolation of the country! The grass would grow in the streets of our cities, our ships would rot in their harbors, our plantations would become a wilderness of cane-brakes. The re-subjugation