Great Men and Famous Women. Vol. 5
A series of pen and pencil sketches of the lives of more than 200 of the most prominent personages in History
0
(0 Reviews) 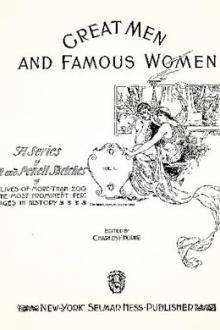 Great Men and Famous Women. Vol. 5
A series of pen and pencil sketches of the lives of more than 200 of the most prominent personages in History
0
(0 Reviews)
Free Download
Read Online

but as soon as the river was between them, the faithless Centaur began to gallop away with the lady. Hercules sent an arrow after him, which brought him to the ground, and as he was dying he prepared his revenge by telling Deianira that his blood was enchanted with love for her, and that if ever she found her husband's affection failing her, she had only to make him put on a garment anointed with it, and his heart would return to her; he knew full well that his blood was full of the poison of the Hydra, but poor Deianira believed him, and had saved some of the blood before Hercules came up.

Several years after, Hercules made prisoner a maiden named Iole, in Lydia, after gaining a great victory. Landing in the island of Euboea, he was going to make a great sacrifice to Jupiter, and sent home to Deianira for a festal garment to wear at it. She was afraid he was falling in love with Iole, and steeped the garment in the preparation she had made from Nessus's blood. No sooner did Hercules put it on, than hi