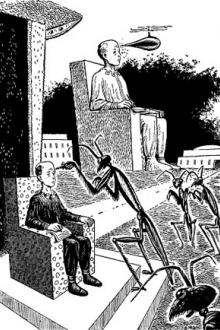 Destiny reached out a hand to Algernon Weaver--but he was a timid man, at first. But on the strange world of Terranova, there was much to be learned--of destiny, and other things....

by leaps and bounds, then more slowly, then hardly at all. Weaver shut off the engines again, and waited.

The star had planets. He noted their passage in the telescreen, marked their apparent courses, and blithely set himself to land on the one that seemed to be nearest. He was totally ignorant of orbits; he simply centered his planet on the screen as he had done with the star, found that it was receding from him, and began to run it down.

He came in too fast the first time--tore through the atmosphere like a lost soul and frantically out again, sweating in the control room's sudden heat. He turned, out in space, and carefully adjusted his speed so that ship and planet drifted softly together. Gently, as if he had been doing this all his life. Weaver took the ship down upon a continent of rolling greens and browns, landed it without a jar--saw the landscape begin to tilt as he stepped into the airlock, and barely got outside before the ship rolled ten thousand feet down a gorge he had not notic 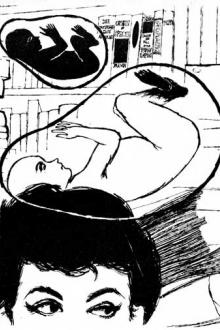 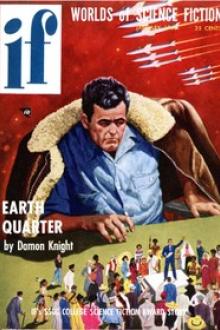 Monaggio
3
I mostly agree with R Stephan, but I would like to point out that the author manages to create a very peculiar main character (self-centered, with growing ego, who feels superior to all the rest etc etc). Destiny gives wings to Algernon Weaver's sleeping megalomania and the way this is portrayed is great.
That's what basically saved the story for me.
12/21/2009