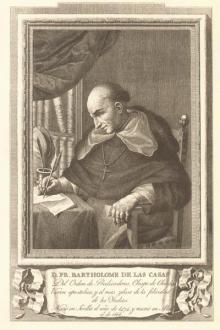 It is sought in the present work to assign to the noblest Spaniard who ever landed in the western world, his true place among those great spirits who have defended and advanced the cause of just liberty, and, at the same time, to depict the conditions under which the curse of slavery was first introduced to North America.

they were born subjects of barbarous rulers, in lands where the traffic in slaves was active. Many were obtained from the Arabs and Moors, who already held them in bondage and, without minimising the sufferings inseparable from all slave-trade, we may not unreasonably assume that those who reached Portugal and Spain were the least unfortunate of all their kind.

Las Casas, being a native of Andalusia, was familiar with this slave-trade, for Seville was well provided with domestic slaves, whose lot was not a particularly hard one. So much a matter of course was the presence of these negroes in Spain, that he never admits he had never duly considered their condition or the matter of their capture and sale. It thus fell, as will be later described, that he assented to the demands of the Spanish colonists in the Indies for permission to import Africans from Spain to take the place of the rapidly perishing Indians. In the recommendation of this measure, several later historians pretended to discover the orig