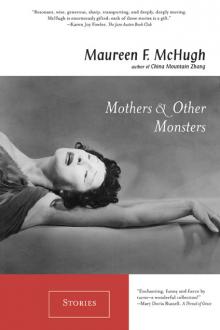 In her luminous, long-awaited debut collection, award-winning novelist Maureen F. McHugh wryly and delicately examines the impacts of social and technological shifts on families. Using beautiful, deceptively simple prose, she illuminates the relationship between parents and children and the expected and unexpected chasms that open between generations.

men. They had stained yellow teeth and fingernails the same color as their hands. They were businesslike. One of the little ones shouted something in Chinese in a curiously human voice as she passed, and then shrieked like an animal, baring its teeth at another monkey. She started.

Out front, he flagged a taxi. The car that pulled up was yellow with a white top and said Toyota and Crown Comfort on the back--it had pulled past them and the Golden Boy grabbed her elbow and hustled her to it. Rachel expected the driver to be a monkey but he was a human. The Golden Boy leaned into the front seat and shouted at the driver in Chinese. The driver shouted back.

Rachel felt exhausted. She should never have come here. Her poor heart! She would go back home.

The Golden Boy opened the back door and bowed to her and walked away.

But he was already inside the airport.

The driver said something gruff to her and she jumped into the taxi. It had red velour seats and smelled strongly of cigarette smoke. The driver swung the car out

Jennifer S
5
Mothers & Other Monsters was picked as a contemporary short story collection for one of the book clubs I run. Specifically, a short story collection book club targeting mothers of young children. The stories are lovely and striking. Overwhelmingly applauded. Each story is so significantly different and overall is wonderful find.
03/28/2010

52 Books
2
I don't really like short stories, and these were nothing special. Unless you are a fan of science fiction/futuristic short stories, you can easily give these stories a miss.

parky
5
Great collection of short stories with mothers the common theme. Most are sci fi orientated. An award winning collection and deservedly so in my opinion.
06/18/2008