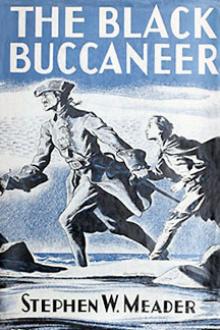 The hero was taken by pirates operating along the Atlantic coast in the early eighteenth century. He saw enough of piracy and later had the compensating thrill of helping to capture those same blackguards, who came to no good end. Two nice boys, something of colonial life and many exciting adventures for boys or girls about twelve.

a youngster of his age. He must know who they were and whether they intended crossing the island. There was no feeling of mere adventure in his heart now. It was purely sense of duty that drove his trembling legs down the hillside. He shivered miserably in the night air and felt for his pistol-butt, which gave him scant comfort.

The ridge, which has already been described, bore in a southerly direction from the base of the ledge, and sloped steeply to the head of the southern inlet. High above the arm of the bay, where the sloop was now moored, and scarcely a quarter of a mile from the shore, the ridge projected in a rough granite crag like a bent knee. Jeremy had a very fair plan of all this in his mind, for his trained woodsman's eye had that afternoon noted every landmark and photographed it. He followed this mental map as he stumbled through the trees. It seemed a long time, perhaps twenty or thirty minutes, before he came out, stifling the sound of his gasping breath, and cro