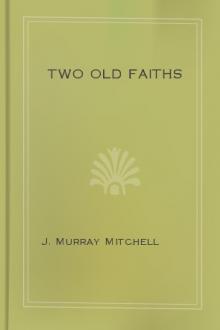 up from the ocean were at first thin and light; ah! a hostile demon was in them, carrying off the healing waters and not permitting them to fall; but the thunder-bolt of Indra flashed; the demon was driven away howling, and the emancipated streams refreshed the thirsty earth. Varuna was not indeed dethroned, but he was obscured, by the achievements of the warlike Indra; and the supersensuous, moral conceptions that were connected with the former gradually faded from the minds of the people, and Varuna erelong became quite a subordinate figure in the Pantheon.

[Sidenote: Number and relations of deities uncertain.] The deities are generally said in the Veda to be "thrice eleven" in number. We also hear of three thousand three hundred and thirty-nine. There is no system, no fixed order in the hierarchy; a deity who in one hymn is quite subordinate becomes in another supreme; almost every god becomes supreme in turn; in one hymn he is the son of some deity and in another that deity's father, and so (