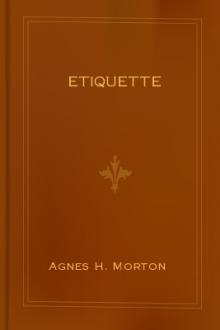 the brief hour of action; and his hero-worshiping countrymen will always recognize him in his most salient character, "every inch a soldier." It is quite impossible to call him "Mr.," or at once to know who is meant if his card reads--for instance--"Mr. Lucius Fairchild." Nothing but the title of his well-earned rank gives an adequate idea of the man.

The official cards of political officers and ambassadors, which bear the title and office of the man--with or without his name--should be used only on official or State occasions, and during the term of office. When the incumbent "steps down and out," this card is also "relegated." His friends may continue to greet him as "Governor," but he no longer uses the title himself. In strictly social life, the personal card of the ex-Governor is like that of any other private citizen, subject to the same rules.

Similarly, professional or business cards that bear ever so slight an advertisement of occupations are not allowable for social purposes.