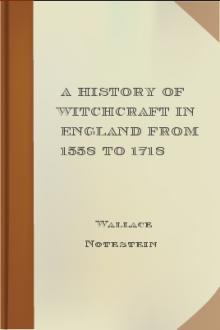 ns; there is no elaborate and systematic theological explanation of human relations with demons.

But these notions were to reach England soon enough. Already there were germinating in southern Europe ideas out of which the completer notions were to spring. As early as the close of the ninth century certain Byzantine traditions were being introduced into the West. There were legends of men who had made written compacts with the Devil, men whom he promised to assist in this world in return for their souls in the next.[2] But, while such stories were current throughout the Middle Ages, the notion behind them does not seem to have been connected with the other features of what was to make up the idea of witchcraft until about the middle of the fourteenth century. It was about that time that the belief in the "Sabbat" or nocturnal assembly of the witches made its appearance.[3] The belief grew up that witches rode through the air to these meetings, that they renounced Christ and engaged in foul forms of hom